How Justin Trudeau is winning Quebec

Unlikely as it seems, support is pouring in from La Belle Province 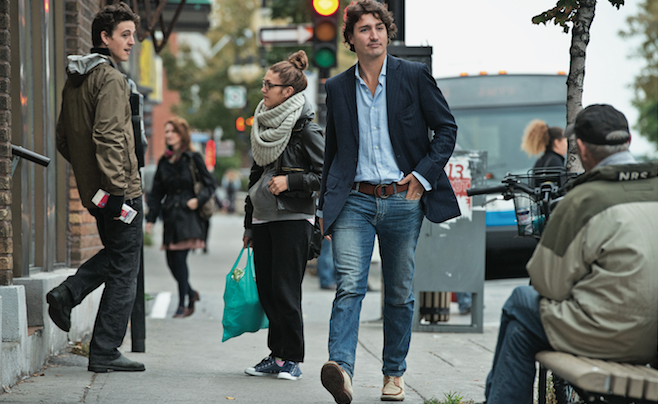 Until a fateful fall night last year, François Remillard hadn’t found a way to scratch his political itch. A history teacher awoke the interest in high school but, as the 27-year-old Quebecer points out, that was 10 years ago; since then, his passion has been for work (he is studying to be a surveyor) and studiously avoiding talking politics with his family, most of whom support the Parti Québécois.

And then on the evening of Oct. 2, Justin Trudeau declared his intention to run for the leadership of the Liberal Party of Canada. His speech, replete with frothy declarations of his love for Canada and reminders of how much he has to learn, was classic Trudeau; he has the ability to at once come off as both outrageous and humble. After watching it on the Internet, Remillard was hooked. He followed the campaign intently from then on, and became a volunteer in January. “There are no other leaders who inspire me,” he says. “For me, it’s a question of image, of an idea of Canada. Trudeau has what it takes to get young people in Quebec and Canada interested and involved in federal politics.”

Starry-eyed optimism of the freshly converted? Perhaps. Yet there is something remarkable in Remillard’s sudden attachment to all things Liberal and Trudeau. That any young French Quebecer could find a home in a party synonymous with the sponsorship scandal—last decade’s ill-fated and corrupt attempt to sell the virtues of federalism to the province—goes against a well-worn narrative. That Remillard has been drawn to politics by the son of Pierre Elliott Trudeau would border on heresy for many in the province. After all, so the story goes, Trudeau père forced the Constitution on Quebec and stunted the province’s aspirations.

Yet Liberal fortunes are on the rise in the province. For the first time in nearly a decade, the party is ahead of the Bloc Québécois, according to a recent CROP poll. There are caveats: it’s by a single percentage point, well within the poll’s margin of error. And, with support hovering at 23 per cent, the Liberal party is far from its glory days of 2004, when upwards of 40 per cent of the party’s seats were in Quebec.

Polls aside, more Quebecers are showing their support where it matters: with their wallets. According to an analysis of Elections Canada data, the party raised just shy of $600,000 last year in Quebec, more than the Conservatives and the NDP. Perhaps more significantly, the party raised this amount through 2,635 donations—more than the NDP’s 2,206 and the Conservatives’ 1,142. (In 2012, the Bloc raised roughly $164,000 through 425 donations.)

For the Liberal party, this represents a 34 per cent increase in Quebec donations—and a 125 per cent increase in the number of donors—over 2010, the last fundraising year before the election. It is also a marked difference from June 2012 when, as reported at the time, Liberal membership in the province was down nearly 40 per cent from the 2011 election.

Two things have changed, according to Liberal officials in the province: the Trudeau campaign, which has garnered the most supporters of any of the leadership candidates and dwarfed the party’s fundraising expectations, and the party’s new “supporter” category, with its focus on smaller donations.

Adopted at the Liberal biennial convention in January 2012, the supporter category is essentially a free, limited membership to the party. Supporters provide their name, postal code and email address and declare that they aren’t a member of another federal political party. This allows them to vote for the party leader and, the party hopes, prompts the cultivation of new Liberals.

The initiative is the brainchild of former Liberal party president Alfred Apps, who based the idea on a key element of the renewal of the Democratic party under Barack Obama. “We don’t make money from memberships anyway, so we asked, ‘Why the hell don’t we open a category where we can get people engaged in the party without having to pay $10 first?’ ” Apps says.

There are mixed feelings over the supporter initiative among Liberals themselves. “Our party is very vulnerable to special interest groups right now because of the supporter category,” says Alexandra Mendès, the president of the Liberal party’s Quebec wing. The worry, Mendès thinks, is the category will allow for the foisting of unpopular (or un-Liberal) views on the party.

At the same time, though, she credits this new crop of supporters for the increase in donations in Quebec—and most of these supporters, she says, came to the party thanks to the Trudeau campaign. “By reaffirming strong Liberal stances, Justin has reawakened the party, especially with Liberals who had lost interest and faith,” Mendès says. “Just the name ‘Trudeau’ reawakens passions in the province—good or bad.”

And how. Though born in Quebec, Pierre Elliott Trudeau was never wholeheartedly embraced by his native province. One of Trudeau’s first public appearances as Liberal leader, during Montreal’s St. Jean Baptiste parade of 1968, brought the city police force’s anti-riot squad out for the first time. He had evident disdain for former premier (and secular saint) René Lévesque, barely tolerated Lévesque’s successor, Robert Bourassa, and had a protracted, decades-long battle with Quebec nationalists that ended only with his death in 2000.

Few nationalists see much daylight between father and son. In certain media circles, Justin Trudeau’s nickname is le petit PET, a play on his father’s initials that translates to “the little fart.” Worse, Justin Trudeau remains nothing short of “the symbol of the negation of [Quebecers’] most fundamental collective rights,” says sociologist and sovereignist columnist Mathieu Bock-Côté, adding, “Justin is a media superstar before being a politician. He wouldn’t be anything without his family name.”

Yet Pierre Trudeau, for all his notoriety, last held power nearly 30 years ago­—three years before Remillard was born. “The old cat fights—who won and who lost the referendum—that’s less important than health, education and debt,” Remillard says. “Priorities have changed.” That’s certainly a message echoed by Prime Minister Stephen Harper. The NDP’s Thomas Mulcair, meanwhile, has made much of his young Quebec caucus and the social democratic values to which Trudeau alludes in his speeches. So what makes it so special when Trudeau says these things? Remillard is quick to answer. “I find the other leaders don’t incarnate change,” he says. Plus, he adds, there’s the matter of Trudeau’s “star power.”

Remillard has seen Trudeau speak four times since January. Each time he has left more convinced that Justin (you don’t hear his last name much in the Trudeau campaign) is the right leader for Quebec. Three days a week, he oversees a telephone campaign at the campaign call centre; he and his fellow volunteers make roughly 1,440 calls to Quebec supporters every eight-hour shift. “I was very, very young when Pierre Trudeau was around,” he says, shrugging. “You can’t change the past, but his son is the future.”