Her attempt at Trumpian populism repulsed most voters outside her party. But were Conservatives paying attention? 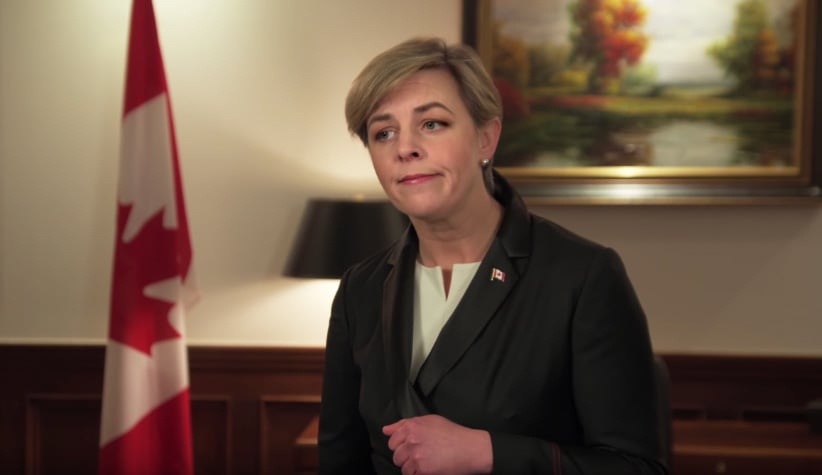 For more than a year, Kellie Leitch has waged a sensational, divisive and turbulent campaign for leadership of the federal Conservative Party. The MP was floated as a human trial balloon for a “populist” movement within the party, a strategy that led to an odious Canadian first: a front-runner for leadership of a mainstream party repeatedly having to say “I am not a racist.” Leitch’s controversial plan to screen immigrants for “anti-Canadian values” ignited national debate about immigration policy and what it was to be Canadian. The gambit, both buttressed and buffeted by world events, has yielded unintended result: to test the limits of Canadian’s tolerance—both for newcomers and for thinly-veiled bigotry.

Leitch, an orthopaedic surgeon, entered the race as a staunch loyalist to a party that has changed shape markedly since she joined its youth arm 32 years ago at age 14. She worked for years as a back-room organizer; the party was her “second family,” she likes to say. When Conservative MP Helena Guergis was banished in 2010 amid scandal, Leitch was conscripted to replace her in the Ontario riding of Simcoe-Gray. With the support of high-profile Conservatives, Leitch won handily.

On paper, Leitch is an ideal leadership candidate—an accomplished female doctor raised in Fort McMurray, Alta. who also holds an MBA and has interest health policy. As an MP, and later minister of labour and minister for the status of women in the Harper government, Leitch proved herself a good soldier. Amid criticism, the doctor refused to object to her government’s endorsement of the asbestos industry (she’d  later say she rallied to oppose it behind the scenes). As minister of the status of women she was drafted with former immigration minister and now-fellow leadership candidate Chris Alexander, to front the launch of the now-infamous “Barbaric Practices tip line.”

The incendiary initiative would be blamed for contributing to the Conservative’s electoral loss, one that lead to the current leadership race. Leitch threw her name into the ring in April 2016, the first to do so. Given her background, and her status as the only woman (until Lisa Raitt entered the race in November), Leitch had a swath of compelling issues on which to stake a campaign: health care, the labour market, women’s advancement, to name three. Instead she waited until September, post the Brexit vote and amid the rise Republican presidential nominee Donald Trump and Marine Le Pen, leader of France’s far-right National Front, to roll out a flawed, if timely, plan to screen immigrants and visitors to Canada.

READ MORE: How Kellie Leitch touched off a culture war

Leitch would  express teary-eyed regret for her involvement in the tip-line. But it provided a screening device itself, indicating an MP willing to dog-whistle to a far-right, anti-Muslim, anti-immigrant base. During the campaign, Leitch repeatedly referred to cultures that use “stoning,” then expressed indignation at the suggestion it was code for Muslims.

By November, she had traction. One poll placed her first of then 12-person pack, leading the pollsters to describe her in its release as “Canada’s Donald Trump.” Until his victory, Leitch distanced herself from Trump; after, she congratulated him for “an exciting message that needs to be delivered in Canada as well,” seemingly oblivious to data that suggested only 14 percent of Canadians shared that view.

Political strategist Nick Kouvalis, credited as the mastermind behind the victories of Toronto mayors Rob Ford and John Tory, waged Leitch’s campaign of Trumpian distraction. In November, he claimed a break-and-enter at Leitch’s home might be politically motivated (police found an alarm had gone off but said “no break-and-enter occurred”). In January 2017, he admitted to spreading false claims that the Trudeau government financed terrorists and the Clinton foundation. Kouvalis himself became part of that distraction, exiting and returning after a DUI charge and then after he used derisive alt-right slang to attack a critic on Twitter. One casualty of the chaos was little media attention paid to the platforms of less sensational candidates.

Leitch took a page from Rob Ford’s playbook in railing against “political correctness” and the “elites,” yet lacked Ford’s common touch or people skills. She’d brandish her impressive educational credentials to shout down a critic: “Please understand that I do have 22 letters at the end of my name, I’m not an idiot.” Later, she’d Tweet there were only 18 letters behind her name, a humble brag that invited more derision.

Leitch’s gaffes unified her opponents. In a pander to rural Canada, she blasted Torontonians for lacking the community she saw among her small-town neighours who she could ask for a cup of sugar. It summoned an  outpouring of anecdotes detailing big-city acts of kindness. Meanwhile, Leitch’s own sugar-sharing constituency waged a months-long campaign against her.

RELATED: What made sparks fly at the Conservative leaders debate

High-profile Tories and former Leitch supporters also distanced themselves, a list that includes Jason Kenney, the former minister of national defence, now leader of the Alberta Progressive Conservatives; Steve Kent, former deputy premier of Newfoundland; Hugh Segal, the retired senator; Graham Fox, chief of staff to former federal Progressive Conservative leader Joe Clark; and Bill Davis, the former Ontario premier who campaigned for Leitch in 2010. It was a climate so rife with frustration that  Maclean’s columnist Scott Gilmore seized the opportunity to agitate for a more progressive Conservative party that “believes in liberty, equality and facts over ideology.”

Kevin O’Leary’s short-lived candidacy appeared the coup de grâce for Leitch. Here was a higher-profile pseudo-populist who, like Trump, played a successful businessman on reality TV. Leitch’s adjacencies to white supremacists—her campaign placing ads in Breitbart News,  endorsements from two groups (which she’d reject)—didn’t help at a time anti-Semitism and and hate-crimes were rising in Canada. Her refusal to utter the word “mosque” when condemning the February mass murder of six Muslim worshipers in Quebec City resulted in a large banner draped over her Collingwood constituency office. It listed the names and ages of the six murdered men under the message “Hate puts us all at risk.” Leitch was called on to resign from the campaign. Undaunted, she forged on, releasing a much-mocked video. That it was so very bad ensured it occupied the news cycle for days.

Now the Conservative Party will decide where their values lie. Leitch enters the convention with more than 30,000 signed campaign supporters, which represents more than 20 percent of votes cast. She ranked fifth in the last Mainstreet/iPolitics poll. Her once-formidable fundraising machine has stalled; records indicate Bernier, a libertarian who has O’Leary’s endorsement, received twice the donations with nearly double the donor base. Given chaos south of the border, any appetite for the “Canadian Donald Trump” has abated, at least for now.

In a recent interview, Leitch said she’d do nothing differently: “I don’t have any regrets because I think that this has been a really—and is now becoming even more so—a thoughtful dialogue Canadians are having.” Again, the comment suggests tone-deafedness. “Thoughtful” or “dialogue” are hardly the first words most Canadians would use to describe Leith’s polarizing campaign. Looking back, however, it inadvertently provided a lens through which both Conservatives and Canadians could gauge their own “values.” This weekend’s Conservative convention will prove the first test.