How many investigations are going on?

The CIA, the FBI and a handful of congressional committees have been looking into links between Trump aides and Russian meddling with the election. And this is early days. 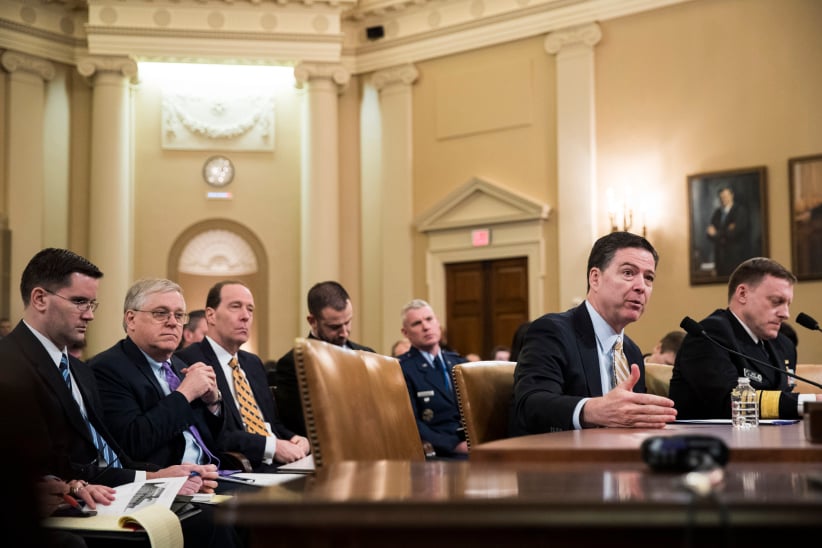 James Comey, second from right, was fired as FBI director by Donald Trump, but his former colleagues continue to investigate Russian interference in the 2016 election. (Drew Angerer/Getty Images)

Fingers can hardly count the inquiries underway toward the Trump administration. At least eight government bodies are investigating the president and people surrounding him, as are media outlets worldwide, triggering Trump to declare himself the victim of a “witch hunt” and hauling the White House into a cauldron of mutual suspicion.

The CIA was reportedly first to find evidence about Russia’s involvement in the election of Trump; in late August, director John Brennan phoned eight of his senior staff, some on their summer vacations using private phone lines, to brief them on information about hacked Democratic emails. The CIA also continues to provide “raw intelligence” to congressional committees.

In Congress, the House Intelligence Committee has been suspected of bias in its investigation of Trump’s Russian connections. The original chair of the panel, Devin Nunes, was caught reporting his findings to Trump before telling the rest of the committee. After Tunes stepped down in April, the chair went to Republican Mike Conaway, who was seen wearing pro-Trump clothing during the election.

More insight has come from an investigation by the House Oversight Committee, a group within Congress that has reported that Michael Flynn may have broken the law by receiving $45,000 from a Russian state news outlet to attend a dinner in 2015. The Department of Defense, under the inspector general, also launched an investigation on April 4 into Flynn accepting illegal payments.

The tally of detectives extends to the U.S. Treasury Department, which is digging into the financial transactions of Trump’s campaign chairman Paul Manafort. The department was originally looking into Ukrainian stolen assets when it found that Manafort was wiring money through Cyprus, a common offshore haven for Russians to store their money.

And of course, the FBI has been investigating Russia’s involvement in the election of Trump since before the November election. After Trump fired FBI Director James Comey, deputy director Andrew McCabe told reporters in March that the investigation would continue. The firing has prompted the appointment of a special counsel, former FBI director Robert Mueller, to look into Russian interference in the 2016 election, including possible links to the Trump campaign.

Media outlets have done sleuthing of their own. Most recently, on May 18, Reuters reported that Trump’s campaign had at least 18 undisclosed calls, e-mails, and text message exchanges with Russian officials and others with Kremlin ties. One of the contacts was Viktor Medvedchuk, a Ukrainian oligarch; his daughter has Vladimir Putin as a godfather.

Trump has tried to deflect the suspicion back at the investigators. He complains that he is the subject of a “hoax” and a “witch hunt.” After the launch of the special counsel, he told reporters, “a thorough investigation will confirm what we already know—there was no collusion between my campaign and any foreign entity. I look forward to this matter concluding quickly.”