How much do Canadians dislike Donald Trump? A lot.

A new 338Canada/Léger poll shows that from coast to coast Canadians overwhelmingly support Biden over Trump. The only exception is among Conservatives. 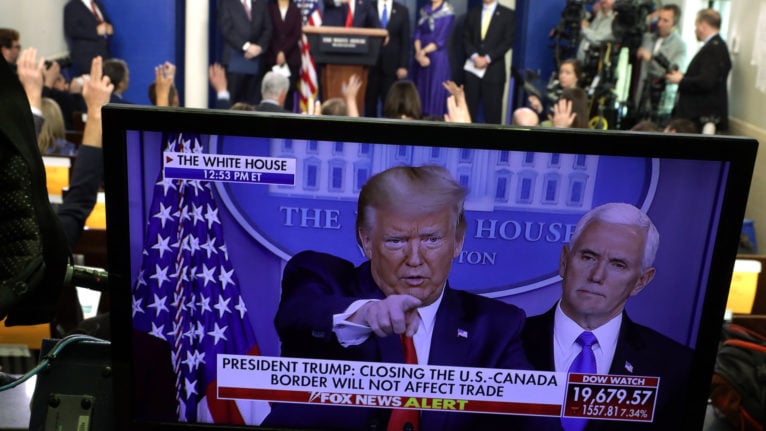 Trump takes questions during a news briefing at the White House on March 18, 2020 (Alex Wong/Getty Images)

This November, millions of American voters will flock to the voting booths (or will already have voted by mail) to elect over 400 congressmen and congresswomen, 35 senators and, of course, the next president.

The world will be watching—and holding its breath.

In Canada, we know all too well that this election could have tremendous consequences on the economy and our livelihoods. The relationship between President Donald Trump and the Trudeau government has been lukewarm at best since 2016, and Trump’s sudden and apparently random impositions of tariffs on Canadian steel, aluminum and other resources crucial for Canada’s economy has not been well received north of the border.

And so as we enter the last month of the campaign, what do Canadians think of the U.S. presidential race? If, hypothetically, Canadians could vote for president, how would they vote? We present today the results of an exclusive Léger poll for 338Canada which asked over 1,500 Canadian voters this exact question. Let’s take a look at the national results, and then break them down by region, age, and political allegiance.

To the question: “If you could vote in the U.S. presidential election, would you vote for Joe Biden or Donald Trump?”, a significant majority of Canadians (72 per cent) would support Democratic nominee Joe Biden. Only 14 per cent of respondents would vote for Donald Trump, and another 14 per cent are undecided.

Among decided voters, Biden receives the support of 84 per cent of Canadian voters:

Breaking down these results by geographical and polling region of Canada, we notice very little variations from one region to another, with the notable exception of Alberta:

In Atlantic Canada and Quebec, Biden receives 90 and 89 per cent support, respectively. In Ontario, the province is aligned with the country’s average of 84 to 16 per cent in favour of Joe Biden. In Manitoba and Saskatchewan, Biden leads Trump 82 to 18 per cent, and in British Columbia, the split is 88-12 in favour of Biden. (Naturally, we must use caution with regional sub-samples because the uncertainty is higher.)

In Alberta, one third of decided voters (32 per cent) would prefer Trump over Biden. While this is significantly higher than the country’s average, we must stress that Biden still has twice as much support as Trump in arguably Canada’s most conservative province.

We also notice little contrast in age groups: 88 per cent of the younger demographics (18-34 year olds) support Biden, while that proportion is 78 per cent with 35-54 year olds, and 86 per cent with voters aged 55 and over:

Lastly, Léger’s poll also measured voting intentions in Canada (which had the Liberals rebounding after the Throne Speech last week). When we breakdown the Biden-Trump preference with current party preference in Canada, we see that a vast majority of Liberal, NDP, Bloc, and Green voters would support Joe Biden if they could.

For the Conservatives, the race would be much closer:

Indeed, only 6 per cent of NDP voters and 7 per cent of Liberals would support Trump given the chance. This is not especially surprising, but it certainly confirms the deep polarization around the perceptions of Donald Trump.

As for the Conservatives, 41 per cent of CPC voters would support Trump over Biden, a significantly higher proportion than any other major party. While it is not surprising to measure higher support for a Republican candidate from the supporters of the main right-of-centre party in Canada, this proportion is such that it simply cannot be ignored by new CPC leader Erin O’Toole.

(Bloc and Green voters support Biden in similar 90-10 per cent proportions, but, since the sample of BQ and Green voters were both small—under 120 respondents apiece—we caution against drawing conclusions from these numbers.)

Is there such political osmosis across the border between the Conservatives in Canada and the Republicans in the United States? According to this poll, the pro-Trump conservatives have been growing in numbers within the party, and this could partly explain why Erin O’Toole chose to run his “True Blue” campaign of courting social conservatives to win over the party’s leadership.

This will be a major challenge for O’Toole: Will he actually manage to convince centrist and Red Tory voters to join pro-Trump conservatives under the same banner before the next federal election? The CPC might very well be a big-tent party, but how much can one stretch its fabric before it snaps?

For the full report from Léger, follow this link. The details of the Trump/Biden question are on page 5. The poll was on the field from September 25 to 27, 2020 and collected data from a representative sample of 1,514 Canadians over the age of 18. The data was then analyzed and weighted according to gender, age, mother tongue, region, education level and the presence of children in households in order to render a representative sample of the general population.