What can Justin Trudeau learn from his predecessors when he meets Donald Trump on Monday?

WASHINGTON – Canada’s prime minister has to go see the U.S. president, and he’s not especially thrilled. The president is deeply unpopular in Canada — and elsewhere, since campaigning on protectionism and tariffs.

The prime minister wants to lay low. His plan: get in and out of Washington with the least possible fuss. He even pleads with photographers while entering the White House: Don’t snap my picture. He’d rather not be seen with this president.

What a stark difference from his other Washington visit — when he basked in the well-wishes of hundreds in a pomp-filled festival on the White House lawn as he visited a different president, adored by Canadians.

RELATED: The big issues that could be on the Trump – Trudeau agenda

When Justin Trudeau meets U.S. President Donald Trump on Monday, he might feel like he’s experiencing the life of R.B. Bennett. The 11th prime minister had to juggle a political hand-grenade in the form of Herbert Hoover, to sunbathing in the glow of Franklin Delano Roosevelt.

That single Depression-era term illustrates extreme examples of how the White House occupant can shape a prime minister’s career: some presidents are locomotives pulling your popularity, others the wagon that drags.

Hoover was a human-sized heap of dead political weight. One book, Lawrence Martin’s, ”The Presidents and the Prime Ministers,” chronicles various ways Bennett avoided being seen during his 1931 trip.

”Twenty-five photographers prepared to take the standard picture of the president and the visiting dignitary… But Prime Minister Bennett stopped them… (He said that) since the visit is ‘unofficial’ pictures should wait for another occasion. The problem, as most top officials there realized, was that Bennett did not want to be seen on the front page of Canadian newspapers with Herbert Hoover.

”The meeting with the president did not go well.”

Bennett avoided the press elsewhere. The Washington Star said media tracked Bennett to a wreath-laying at Arlington Cemetery: ”(But) a photographer who followed (Bennett) was requested to refrain from taking pictures.”

Bennett issued no public statement about the trip, and wouldn’t answer questions. One reporter asked about U.S. hopes for a new seaway: ”What about the St. Lawrence?” Bennett replied: ”I believe it is still there.”

The Ottawa Journal wrote that Bennett returned home, ”as silent as a Tammany magistrate before a grand jury.” The Associated Press said he passed through the train station unnoticed — U.S. secretary of state Henry L. Stimson said: ”(Bennett travelled) incognito consisting of the wearing of a derby rather than a silk hat.”

How different with FDR.

Two years later, Bennett arrived at the White House for meetings aimed at reversing the protectionist devastation of the Hoover years. He and Roosevelt released a joint statement promising to expand trade.

The New York Times called the White House lawn welcome ”a scene of shifting colour.” About 500 people were there to greet Bennett and a French dignitary. Eleanor Roosevelt served tea. There was a state dinner. Newspaper scribblers were on hand to record the president’s first words to his guests: ”I am glad to see you. Welcome to the White House.”

Trudeau was treated last year to such a scene on the White House lawn. The smile etched into his face, and the arms extended in a hug around Barack Obama, prompted headlines about a bromance.

Trudeau has conceded as much. In a year-end interview with The Canadian Press, Trudeau said he has dual responsibilities: on the one hand, to encourage a strong economic partnership, and the other, to stand up for his values. ”In certain situations, it’s to work in a very collaborative way. In other situations, it will be … very clear that we do not share the same values.” 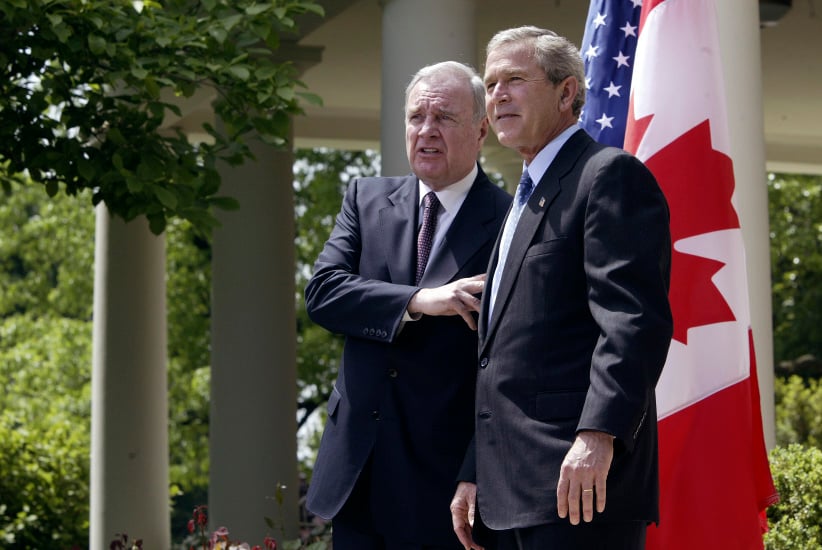 U.S. President George W. Bush (r) and Canadian Prime Minister Paul Martin (L) speak to reporters in the Rose Garden following a meeting in the Oval Office of the White House in Washington, April 30, 2004. Martin is in Washington on a three-day official visit. (Chuck Kennedy/MCT/Getty Images)

He’s hardly the first prime minister to deal with a politically problematic president — as illustrated by the Hoover episode. George W. Bush’s unpopularity in Canada also caused headaches for the Paul Martin Liberals.

They agonized for months over missile-defence co-operation with the U.S.

But a former Martin aide says he feels lucky — dealing with Bush was pleasant. For starters, Bush was easygoing, says Scott Reid. His White House was filled with professionals who understood Canada’s political realities, and didn’t hold grudges.

”I don’t think our situation with George W. Bush was even remotely as challenging,” Reid says.

”I always found that (Bush) was impressive. And thoughtful…. You were dealing with a rational human being.”

Take the rejection of missile-defence. Reid recalls hand-wringing from political pundits and diplomats — everyone was convinced Canada had to say yes, after saying no to Iraq.

But Bush’s people? They took it in stride.

Reid recalls the fateful phone call: ”(Under-secretary of defence Paul) Wolfowitz says, ‘That’s fine… We knew that wouldn’t work for you guys, politically. The door’s open if you ever want to come back… Listen, while I’ve got you on the phone, I just saw Hotel Rwanda last night. Is there any way we could arrange an opportunity to sit down with Gen. (Romeo) Dallaire? We’d really love to hear from him and get his impression on things.’

”That is literally, word-for-word, the way the discussion went,” Reid says.

“Political maturity? Tons of it.”

It’s that Canada can achieve big things with unpopular president. Take Ronald Reagan. A Gallup poll from June 1980 shows Canadians favoured his opponent Jimmy Carter by a mind-boggling margin of almost 5-to-1.

In one of his final acts as president, he signed the Canada-U.S. free trade agreement.