How Steve Bannon struggles with unemployment 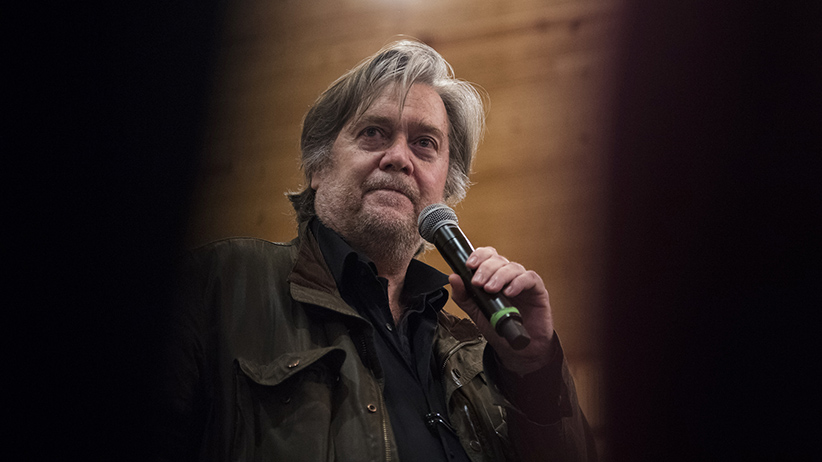 In the end, history may record that the one good thing that can be said for Donald Trump’s presidency is that he demonstrated a remarkable ability to destroy the careers of people who were almost as awful as him. Trump is about a year into his first term and already the political body count at the White House is at “it’s not a tragedy, it’s a statistic” level.

The dead, or at least “indicted for lying to the FBI” include lawyer, lobbyist and political consultant Paul Manafort, a man once happy to advise George H. W. Bush, now just happy to be free from house arrest, although still under a nightly curfew. Apparently working on Trump’s presidential campaign for less than half a year can do that to a man.

Retired general Michael Flynn served 33 years in the U.S. military. He turned Trump National Security Advisor, did the job for less than a month, and recently turned in a guilty plea to avoid serving time. Former chairman of the Republican National Committee, Reince “Pumpkin” Priebus’s term as permanent chief of staff was the shortest in history. Trump’s first communications director, Sean Spicer, was communications director of the Republican National Committee for six full years and became chief strategist for the party as well, all without ever becoming a late-night talk show punchline. Yet somehow, in his brief time with the Trump team, Spicer managed to exaggerate Trump’s crowd size as if the press corps was Stacey from physics class and the inauguration was Spicer’s band’s first gig, and commit the press relations cardinal sin of comparing Hitler to someone favourably and beat out “That’s what she said” for Punchline of the Decade.

Working for Trump is like a “IN SIX MONTHS OR LESS!!!” miracle diet for shedding credibility. Anthony Scaramucci abandoned his lucrative position as co-manager of the investment firm he founded, seemingly in hopes of securing a high-level position in the Trump administration. What he got was an egg-timer-length term as White House communications director that ended with a past-bedtime, expletive-laced phone call to a New Yorker journalist. Scaramucci, whatever he does next, will forever be remembered as that guy who cold-called a journalist and threatened to fire all of his own staff while insisting “I’m not Steve Bannon, I’m not trying to suck my own c–k,” all of which brings us to the most recent casualty of Trump’s diminutive political Monkey’s Paw, and that is the aforementioned alleged autofelator Steve Bannon about whom I have some news.

Last week, Steve Bannon completed one of the most spectacular swan-dives in career history. “Is Steve Bannon the Second Most Powerful Man in the World?” Time magazine demanded to know just last February.

Yet in August, directly following the murderous hate-filled Unite the Right rally in Charlottesville, an event perhaps best characterized as “Alt-Right Prom,” Bannon left the chief strategist position at the White House Trump had created for him. As one of the founding members of Breitbart News, Bannon, who became Breitbart’s executive chair following Andrew Breitbart’s death, is, arguably, if only opportunistically, the ideological stepfather of that entire tiki-torch carrying cohort. That, and apparently Bannon himself, left at least some Republicans Republiskeeved.

Bannon returned to his role as executive chairman of Breitbart News, only to find himself summarily dismissed this week following the publication of Michael Wolff’s Fire and Fury, a book that could be subtitled “Inside the Trump White House Where For Some Reason People Keep Telling Me Things That Will Ultimately End Their Careers.”

Like many, I couldn’t stop wondering how Steve Bannon would handle unemployment and put that in the past tense, because I hadn’t been wondering long when I received an answer. I have in my possession a recording of Steve Bannon in an office talking to a man behind a desk. I document the contents of the tape below.

“How you doing, Steve? I heard what happened with Breitbart, you sleeping okay, taking care of yourself? I don’t mean to be rude, but have you put on some weight?” asks the man behind the desk.

“Yeah, I’ve just been packing on the… No I can’t lie to you. I only lie to my employees, my employers, and the public at large, but not to you, Kenneth. I’ve actually lost 10 pounds, those are shirts,” Bannon smacks his belly. “Dozens and dozens of shirts. You have to understand, I’m a stress-shirter. It’s hard, I’m just looking in the mirror, thinking about how Rebekah Mercer and her giant pile of money dumped my efforts to market crypto-fascism as the new NASCAR and apple pie, and the next thing I know I’ve thrown open the dresser and I’m just piling shirt after ill-fitting shirt onto myself.”

“You should talk to someone about that. Not me, because it’s kind of gross and I’m just your employment counsellor, but talk to a therapist, or maybe a tailor. Yes, talk to a tailor. Now, let’s focus on the future. How’s the job hunt going? What’s the next step for Steve Bannon?” says Kenneth.

“Well, I had a lot of success selling racism and misogyny to gamers. I was thinking, maybe I could start a website dedicated to convincing stamp collectors that moisture warping is actually caused by immigrants and…” says Bannon, appearing to relax a little, removing a shirt.

“Well, that’s one option, Steve, but that might be seen as a bit of a step backwards for you. Look, I know you have a lot of contacts, I was wondering, have you considered offering to represent Milo Yiannopoulos in his case against Simon and Schuster? I understand that you’re totally unqualified for the position, but Milo is currently representing himself and recent studies have shown that it is actually impossible to be less qualified for anything than Milo Yiannopoulos, so I’d at least drop off a resume,” suggests Kenneth.

“Hey, just because I have no respect for the rest of humanity doesn’t mean I don’t respect myself. I’m not working for Milo. Besides, Milo wrote a book and apparently I literally cannot stop talking to people who write books. Milo would have my social security number, bank PIN, and some ill-advised trash talk about Jared Kushner from me quicker than you can say, ‘Feminists are coming to steal your Mario.’ ”

“Okay—please take that shirt off my desk, and that one—I have to do some research into the pay scale, but I have wondered, having met with you several times now, if you might not make a great bogeyman? You don’t have to go in much, in fact it’s better if you don’t. In that way it’s a lot like your old job of film producer. You’re engaged as an imaginary threat, want to do terrible things, but are mostly just used to extort good behaviour from people who don’t yet know any better, as in, ‘If you don’t eat your boiled zucchini Steve Bannon is going to creep in the window and tell you he’s a Leninist.’ ”

“Will they believe that?” asks Bannon skeptically.

“That you’re a Leninist? No. It was just about the weirdest thing you ever said,” replies Kenneth.

“I also said, ‘I am Thomas Cromwell in the court of the Tudors,’ ” says Bannon.

“Aw, man, tell me you didn’t put that on your resume, Steve…” sighs Kenneth. Bannon shrugs, and they both begin looking anxiously through the papers, and shirts, piled on the desk.

“Oh wait, I’ve got it here,” Bannon cuts in, peeling off his outermost shirt to reveal the missing wad of papers. “Wow, that was wedged right in there.”

“I don’t need to look at that now, Steve, I know you’re going to find something. The main thing is not to let yourself slide in the meantime. You still getting up at the same time every day?” asks Kenneth.

(Unintelligible rambling from which I can only make out the words ‘Globalists’ ‘Javanka’ and ‘Buttons.’)

“Okay,” says Kenneth, gently. “The important thing is that, while you’re looking for work, you find other avenues into which to channel your passions. You still keeping up your skills?”

“Look, it’s hard to keep up that ‘at work’ feeling these days. I don’t have any colleagues or underlings anymore. I have to create all the chaos and infighting on my own. Do you know how hard it is to stab yourself in the back through 25 shirts? And if I don’t leak potentially damaging information to the press, no one will.”

“But you’re keeping in the game?” says Kenneth.