How the B.C. Liberals squandered their chance to keep power

Christy Clark has been her party's best player, leading it to an improbable win four years ago. But when it came time to talk to the Greens, the Liberals left her on the bench. 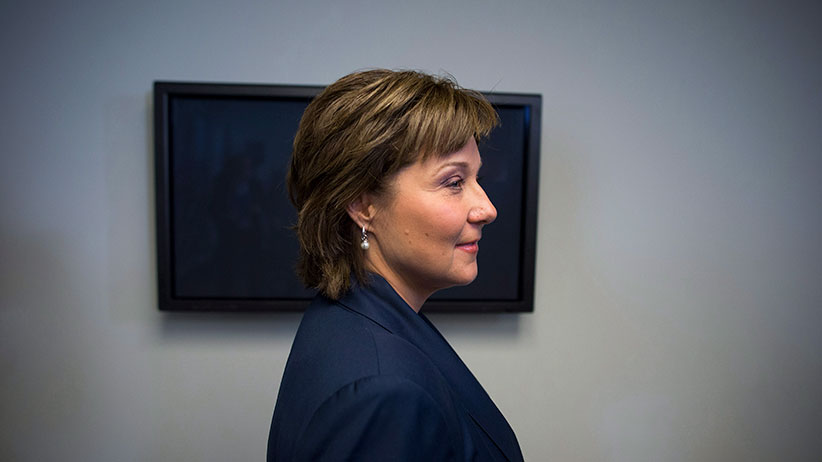 Clark, after a news conference in Vancouver in which she admitted her government is likely doomed (Darryl Dyck/CP)

Imagine the Pittsburgh Penguins had left Sidney Crosby home for the Stanley Cup finals. The guy who told his teammates, “We can win this again,” before the champagne had even run dry during last summer’s Stanley Cup celebrations. Their best offensive force, now entering the legacy-building stage of his career, who some nights seems to grind his way to a “W” on the force of will alone. To the B.C. Liberals, Christy Clark is Sidney Crosby.

She clinched a 2013 election victory not one pundit thought she stood a chance of winning, carrying her caucus on her back. She took a majority. Two years previous, she’d won the Liberal leadership with the support of a single Liberal caucus member. Like Crosby, her best nights came when the odds were stacked against her. Like the Kid, people accuse her of being addicted to winning. Both have innate talents that can’t be taught. For Clark, it’s the smile, the charisma, the boundless optimism. This spring, the fixed writ dropped just as she entered a legacy stage of her own.

Perhaps not surprisingly for a premier who fashions herself after the late W.A.C. “Wacky” Bennett, a right winger who ambitiously grew B.C.’s highway and ferry systems, Clark chose two massive infrastructure projects to mark her legacy: the $9-billion Site C dam, the largest hydroelectric project in B.C. history, and the $3.5-billion Massey Tunnel replacement, which was slated to become the largest bridge ever built in B.C.

But when the May 9 vote left her one seat shy of a majority, she needed a dance partner to stay on. The Greens went in “minds wide open,” says one member of the party with knowledge of the talks; they negotiated in good faith with both the Liberals and John Horgan’s NDP before settling on the latter earlier this week, throwing both of Clark’s legacy projects into doubt (the NDP plans to punt Site C to the utilities commission for review, and Horgan reiterated this week that he will defer to the mayors when it comes to a decision on the 10-lane bridge).

READ MORE: Big changes in store for B.C. under NDP and Greens

It begs the question: why did the Liberals leave Clark out of negotiations, especially in the home stretch? With few scheduled meetings and speeches, and nothing in the way of media engagements, it is hard to imagine the premier’s schedule was too jammed up to work them in. She wasn’t even in her Victoria office, choosing to remain in her waterfront bureau in Vancouver, at the whim of ferry and flight schedules. She relied on her consiglieri, Mike McDonald, to read the room and phone in his takeaway from the day’s deal-making. Her other negotiators included W.A.C.’s grandson, Brad Bennett, a party donor Clark appointed to head BC Hydro; her finance minister, Mike de Jong; and the garrulous MLA Mike Bernier, the former Dawson Creek mayor—“there to schmooze,” one person present explained.

(Several sources for this story were granted anonymity because they had signed non-disclosure agreements).

Whatever her reasoning, in absenting herself, Clark allowed Weaver and NDP leader John Horgan—who arrived at the first meeting looking “pale and anxious,” according to one person present—to form a tight bond over the course of marathon negotiations. There was no love lost between the two men. During the campaign, Weaver had famously castigated Horgan for his temper, suggesting it could make cooperation with the Greens difficult. During the televised debate, Weaver and Clark double-teamed the New Democrat leader, taking shots by turn. But as hours turned into days, a genuine warmth and friendship between Weaver and Horgan opened up, say those present; they came to see they had far more in common than either had ever realized. This includes a shared love for both rugby and paintball (yes, really).

When Weaver was first elected in 2013, cynics in the press gallery snickered at his enthusiasm and endearing naïveté. None is laughing now. Weaver turned out to be a surprisingly good strategist with a deft political touch, playing the two teams off one another, forcing the New Democrats, for example, to move up their planned fall session to summer, by warning them the Liberals had caved to their request to immediately recall the legislature. “You’re going to have to do better,” he told Horgan.

Going into the weekend, some believed the Liberals held the advantage; in addition to the recall concession, they’d agreed to the Greens’ demands for official party status, campaign finance reform, even a referendum on proportional representation. But that’s as close as they came.

Mid-Sunday, their team called the Greens in a panic, having apparently been tipped off that a deal with the NDP was imminent. The Greens agreed to bump up their Monday morning meeting to that night.

They met the Greens at Victoria’s Coast Harbourside, a mid-range waterfront hotel near Fisherman’s Wharf, a moorage with float homes, fresh seafood and a trio of portly harbour seals—one missing an eye—known to beg for scraps. The Greens expected they would come with an offer in hand. They brought “less than nothing,” negotiators say.

Their team was spent. There had been no post-election breather for the three-person caucus. After a hard-fought 30-day campaign, Weaver and his two rookie MLAs, teacher and historian Sonia Furstenau, and W̱SÁNEĆ businessman Adam Olsen were almost immediately thrust into gruelling negotiations. They hadn’t seen their kids in weeks, and were surviving on hotel food, bad coffee and Diet Coke.

That night, however, Weaver, was “really on,” says one negotiator. He was passionate and emotional, deriding the Liberals for ragging the puck; that is, deliberately dragging their feet on the climate change file. Late in his tenure, former premier Gordon Campbell had a come-to-Jesus moment on the science of planetary warming, refashioning the B.C. Liberals as climate leaders, introducing North America’s first carbon tax and legislating emissions targets. Clark, however, froze what was meant to be a rising carbon tax, allowed B.C. to fall hopelessly behind on targets, and halted regulations on vehicles, fuels, buildings and waste management aimed at reducing emissions. These were real “sticking points,” said one Green negotiator.

None of the Greens are career politicians. Furstenau and her husband are part of a climate advocacy group that travels to Ottawa and Washington, D.C. to lobby politicians on their own dime. “We were never in it to win,” said one MLA. “We went into politics to inject new ideas—on climate policy, participatory democracy, engagement.” On May 9, the Green negotiator said, “the cards fell in the most fascinating way possible, allowing us to put those ideas on the government’s agenda.”

By 9:30 that night, it was clear to Greens there was “no hope” of a Liberal deal, said one negotiator. Supporting the NDP was risky; had they thrown support to the Liberals, a strong majority would have ensured their desired legislation was passed. “But in the end, we could not see ourselves supporting a continuation of that government,” one negotiator explains.

Weaver had made up his mind that night, but he slept on it, and the following morning advised Liz Lilly, his chief of staff, to alert the NDP. Lilly then called Bennett to give him the bad news. The Liberals say they felt sandbagged by the decision, which the Greens consider curious. They felt Weaver had been crystal clear Sunday night: they were fed up with the Libs, and the yawning gap between the two parties was too great to close. Later that morning, Weaver, a University of Victoria climate scientist who has published 16 academic papers since entering politics, ducked into the PhD thesis defence of his final grad student, shutting off his cell phone. He emerged hours later to join Horgan in the grand foyer of the provincial parliament buildings. Clark, still in Vancouver, tried reaching him one last time by cellphone. The premier left a message, then tried texting him, asking Weaver to call her. But by then it was too late.

Bernier says the Liberals, like the Greens, stuck to their “core values” in negotiations. And in the end, Clark’s presence in Victoria may not have much mattered. That’s certainly the spin from the Liberal camp. They are also telling their foot soldiers to rally around the leader, that they will quickly be returned to power when the NDP minority government falls.

And yet Clark only endorsed Kinder Morgan in 2016. Would she have been willing to cave, and withdraw her support for the pipeline expansion project? Would that have been enough to push an agreement past the goal line? Would frank talk and promised glory from the premier have helped? We may never know. But in do-or-die negotiations, a deft populist so skilled at the game of politics seems a bizarre healthy scratch.