Allen Abel on the candidates hoping to find a sweet spot with an unhappy electorate. They won’t win, but could steal enough votes to be dangerous. 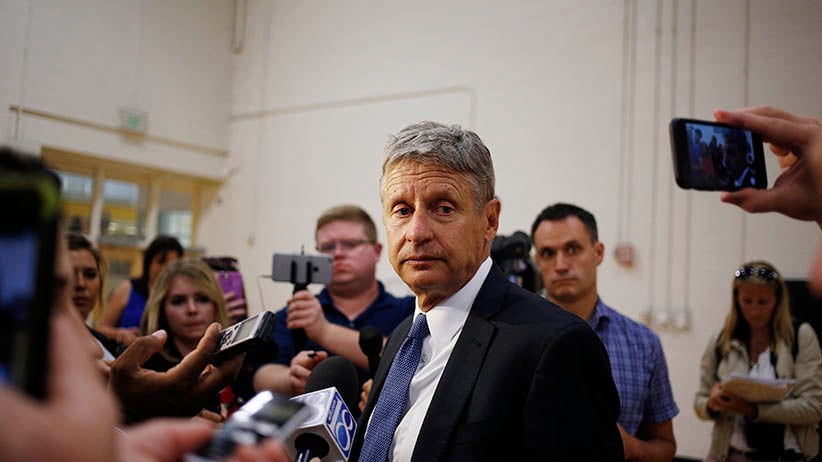 Gary Johnson climbed Mount Everest in 2003 and it has been all downhill ever since. The former Republican governor of New Mexico is running for president—again—at the helm of the little-known Libertarian Party, but his poll numbers are in the high single digits, he is not going to be included in next week’s debate and his chances of defeating Hillary Clinton and Donald Trump to become the third Johnson in the White House (after Andrew and Lyndon) are nil. You would think that the man would descend to base camp, shed his crampons, and thaw his frostbitten toes.

Yet here is the pro-weed, pro-gun, pro-choice and pro-marriage-equality alpinist in Manhattan, being introduced as “the most human superhero you’ll ever meet” to a sizable (500 people) and noisy crowd in a ballroom at the swanky Marriott on Times Square, and vowing on stage to “end the imperial presidency.” Meanwhile, out in the lobby, his backers are selling T-shirts that say, “Feel the Johnson!” double-entendre definitely intended.

This ribald play on Bernie Sanders’s war-cry is in keeping with the jocular and quixotic nature of the third-party Johnson campaign, which is a refreshing contrast to the secrecy, calumny, choler and beggary of the Trump and Clinton machines.

“Honest Gary!” is what he’s often called by William Floyd Weld, who is Johnson’s running mate, the former governor of Massachusetts, a chess-playing francophone and former Republican.

“I will be the most frugal president who ever served,” promises Johnson, 63, who, as chief executive of the Land of Enchantment from 1995 to 2003, vetoed more spending bills than the other 49 governors combined.

Related: Why Hillary Clinton is losing the war

“Help us change the channel on this horror movie!” pleads Weld, who was elected in 1990 and then re-elected with a whopping 71 per cent of the vote as a Republican governor in one of the leftie-ist states in the Union.

“Give us one term,” Johnson-Weld’s campaign literature beseeches. “And if, after four years, you decide you don’t like peace, prosperity and freedom, you can always vote a Trump or a Hillary back into office again.”

Both men are millionaires many times over, Johnson from the construction business he started in Albuquerque as a teenager, going door to door with a hammer and a smile, and later as the CEO of a medical and (where legal) recreational Mary Jane start-up called Cannabis Sativa, Inc.; Weld as a New England blueblood who likes to joke that his Pilgrim ancestors didn’t stoop to sail to Plymouth Rock on the tawdry ship Mayflower in 1620 —“they sent the servants over first to get the cottage ready.”

Johnson’s mountaineering aside—he has summited the highest peaks of all seven continents—each man is the kind of career politician whom a majority of Americans claim to despise. But compared to Trump and Clinton, they are virgins. “This election,” proclaims the novelist Leslie Marshall Weld, William’s wife, to the eager throng at the Marriott, “is like an episode of Survivor in which the contestants are forced to decide between eating a bowl of two-year-old porridge and playing Russian roulette.” 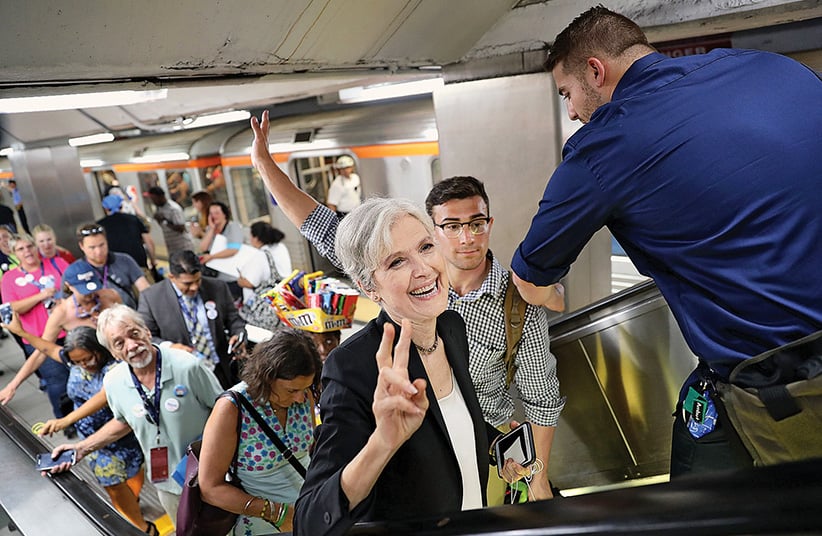 There is a fourth party in play as well, the anti-capitalist, anti-fracking Greens under Dr. Jill Stein, who garnered 0.1 per cent of the vote in 2012. While Honesty and Brilliance are getting an airing in Manhattan, Stein and her running mate, the far-left ideologue Ajamu Baraka, are in the Dakotas, chaining themselves to construction machinery in protest of a gas pipeline that is proposed to run beneath the sacred graves of the Sioux. (In 2015, Baraka called the United States a “corrupt, degenerate, white supremacist monstrosity.” Now he vies to be its veep.)

Related: A nation of sick presidents

Although they are antithetical in ideology, both the climate-calamity Greens and the laissez-fumer Libertarians share a common desire—to somehow find the sweet spot of a disgusted electorate.

As Weld colourfully paints it in New York, “On one side, you have a creaky old machine that wouldn’t pass legal inspection. On the other side, you have this terrifying, terrifying demagogue with no political experience and no respect for facts or the truth. As Oscar Wilde said of fox hunting, it is ‘the unspeakable in pursuit of the inedible.’ ”

This is true: you hardly ever hear anyone hail Honest Hillary or Brilliant Donald. Hence the potential popularity of what Johnson calls “scenario three.”

“Voters leaning toward Trump are understandably fed up with the status quo, of which Clinton is a prime example,” the Manchester, N.H., Union Leader editorialized last week, endorsing Johnson for president as “a bright light of hope and reason.” In North Carolina, the Winston-Salem Journal praised Johnson and Weld as being “principled and honorable in a time when our nation sorely needs those qualities.”

“Being from New York, Trump’s pretty much supported Democrats all his life,” Ali reasons. “Most of his policies, he just changes to whip up support. In Gary Johnson, I see genuine transparency. He’s more of an average Joe. We don’t need another king.”

“When I heard him speak at the Conservative Political Action Conference, I just thought, ‘Yes!’ ” says Olivia Corn, a Cornell University student who has come down from Ithaca to stand on stage with Johnson and Weld. “He was saying the things that I totally agreed with. I had his overwhelming feeling of, ‘Oh, my God!’ ”

It was Corn whose Big Red branch was kicked out of the New York State Federations of College Republicans organization last week for the cardinal sin of dumping Trump and embracing Johnson-Weld. The New Mexican, she says, “is one of the nicest people I ever met,” and she agrees with him that “we need to stop becoming involved in wars that we have no business being in.” Yet Corn—and Usman Ali, who says he never has tried marijuana—is anything but a pothead. “Personally, I hate all drugs,” says Corn. “I am very against legal marijuana. I don’t see this as something the country needs.”

Johnson—who earned 1.3 million votes in 2012, one per cent of the total, as barely a prickle in the side of Barack Obama’s re-election—is hardly the first person to throw his life, his fortune and his sacred honour at the stone wall of the two-party system.

In 1992, the computer-services billionaire Ross Perot amassed nearly 20 million votes and is popularly credited with denying George H. W. Bush a second term and installing the Clintons in the White House.

In 2000, Ralph Nader won enough votes in Florida alone—nearly 100,000—to throw the election to the Supreme Court and, eventually, to George W. Bush, after all that messy “hanging chad” business.

Segregationists George Wallace and Strom Thurmond carried five and four southern states, respectively, in 1968 and 1948. Progressive Robert LaFollette took his native Wisconsin in 1924. All of these men had one thing in common: they didn’t become president of the United States.

Now comes “feel the Johnson” and the widely expressed trepidation by Democrats that, if he makes any impact on the race at all, it will be to sap enough swing-state votes from Clinton to put Trump in the Oval Office in 2017. Though, historically, many of the Americans who tell pollsters in September that they are favouring a third-party candidate get cold feet in the voting booth.

“Gary Johnson is taking votes away from both Clinton and Trump equally,” Corn says. “A lot of people are fed up with both parties.” Since snubbing Trump, she says, “I don’t have to defend myself every day. Now I get to defend something that I enjoy.”

Despite his seemingly ineluctable status as a no-hoper, Johnson has seemed to be enjoying his second presidential campaign, at least until he was tripped up two weeks ago in a television interview. Asked about the besieged Syrian city that is the nucleus of the heartbreaking tsunami of refugees, Johnson replied, “What is Aleppo?”

Now, taken down a notch or two, he begins his talk in Times Square by apologizing for “this whole Aleppo thing,” pivots to job creation and the sharing economy—“imagine Uber doctors, Uber plumbers, Uber everything!”—and later, with his running mate by his side, engages in this repartee with a Maclean’s correspondent:

“When you look at Trump, what do you see?

“Could I ask both of you a three-word question?”

Johnson and Weld: “Go ahead.”

Weld shakes his head emphatically, no.

Johnson: “The ‘pay to play’ is horrible. Is it illegal? If it’s not illegal, it’s highly, highly unethical and regrettably, a lot of politicians play it that way.”

A few days later, the same correspondent encounters Jill Stein and Ajamu Baraka at a small public hall in downtown Baltimore, to which they have escaped in defiance of the sheriff of Morton County, S.D., where both of them are wanted on charges of trespassing and criminal mischief.

“Will you support Jill and Ajamu today with a protest donation of $49?” their latest email cries.

“Donald Trump,” Baraka says in an interview in Baltimore, “got three or four billion dollars of free publicity. He is in a reciprocal relationship with the corporate media. If we got one-fifth of that, we’d be at 15 per cent and in the debates.”

(The pathology of the gridlocked U.S. government is a constant theme in this year’s campaign. All four presidential contenders pledge to “dissolve the unholy alliance between corrupt business and corrupt politics,” which was former president Theodore Roosevelt’s platform slogan when he ran, unsuccessfully, as a third-party comeback kid, back in 1912.)

“I have practised clinical medicine, and now I am practising political medicine,” says Stein, a 66-year-old, Harvard-trained internist. “We need to heal our sick political system so that we can get down to solving all the other problems which are basically killing us.”

Maclean’s: “When you look at Trump, what do you see?

“I don’t look at Hillary Clinton in the theological terms of good and evil,” replies Baraka. “Hillary Clinton is committed to neo-liberal capitalism. I don’t think she’s a bad person. She has no grasp of the realities that most people face, or the changes that are going to occur.”

Stein: “Not without a trial!”