How to finance the Alberta PC dynasty 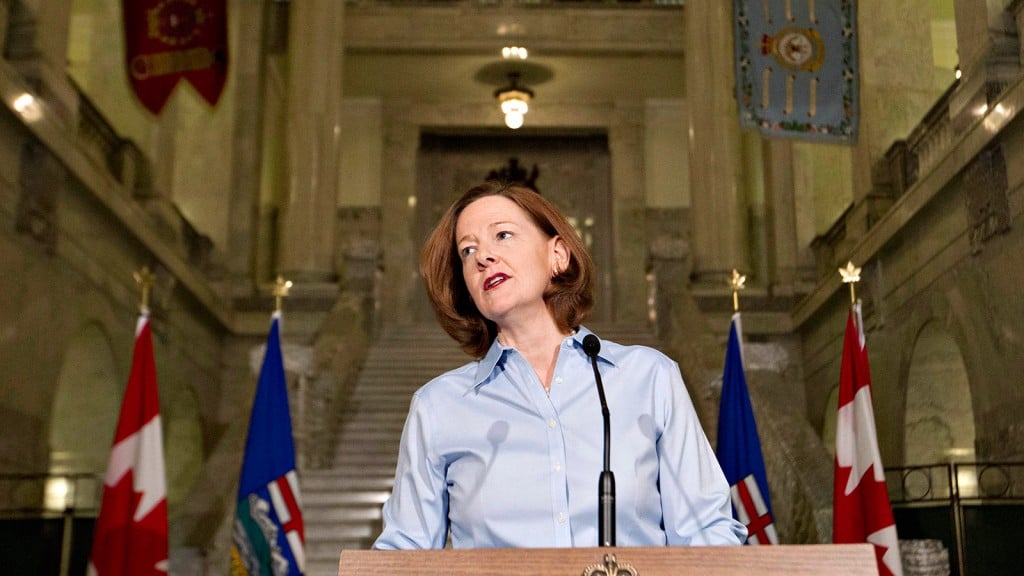 The nature of the Progressive Conservative party’s power in Alberta is best appreciated by looking at its financial report. First you have to take a glance at the rival Wildrose party’s list of contributors. It is, as the naïve might expect, a pretty simple list of names and amounts. The overwhelming majority of the Wildrose’s donors are individual human beings, though there are a few small businesses and oil juniors. But the PC list—we’ll use their most recent quarterly disclosure, the one for the fourth quarter of 2013, as our example—is markedly different.

The PCs, it turns out, are quite popular with numbered companies. Most of those, if you check into it, represent old Alberta money—old by Alberta standards. They tend to be holding companies belonging to wives or offspring of familiar magnates. Our ultra-rich families appear often under their own names, too; the Conservatives got big donations, even as flames of scandal devoured Alison Redford’s regime, from a McCaig and a Hotchkiss and a Seaman.

That’s politics, as it is still practised in Alberta. But some of the corporate entities on the list, entities created or dependent on the Alberta government, seem to verge on the dubious. Hmm, there’s Millar Western Forest Products, in for $8,000. Gosh, their whole business is forest-management deals with the province, isn’t it? I seem to recall they soaked the Alberta taxpayer pretty brutally on one of those insane Getty-era loan guarantees. And didn’t they get handed several million a couple of years ago for some green-energy project?

The Alberta College of Pharmacists is on here ($3,750). I always thought of the College of Pharmacists as a professional regulatory body. Why are they flinging generous lashings of cash at a political party? Do individual pharmacists know? Do they approve? There’s $3,000 from the Alberta Civil Trial Lawyers Association. I guess lawyers have pretty good reasons to keep the people who pick the judges in a good mood. There’s $2,250 from ASET, an analogous professional group for engineering technologists.

I spy a few private health clinics giving some of their profits back to the friendly PCs. Credit unions, which are provincially guaranteed creations of provincial statute, are careful to look after the party. The Alberta Beef Producers kicked in $1,500, even though most cattlemen probably vote Wildrose. Alberta Traffic Supply Ltd., which must do millions of dollars of business a month with the province, kicked in $1,000. And good old Syncrude is in there ($1,875) because of course it is.

Remember, these amounts are from one quarter’s fundraising, though it is the most important quarter of the year. That is business as usual in Alberta—though, again, only for the Progressive Conservative party; none of the others get a tenth as much grease from these corporations and other bodies.

Understand this and you have passed Alberta Politics 101. (Congrats!) But there is a new wrinkle in the PC financial docs. Despite its iron web of institutional connections, the party came out of the 2012 election year in the red. It raised $2.3 million in 2012 and spent $2.9 million. This was hardly an extravagant amount: the party fund had, for example, burned through $3.4 million in the non-election year 2011. Despite the relative austerity with which they fought the election, the PCs showed a net overall liability of $784,767 at the start of 2013.

The final 2013 financial report should be released shortly after this issue hits newsstands, but adding up the quarterly reports for 2013 reveals PC fundraising to be steady, with a total of $2.2 million raked in. The Wildrose, unlike the PCs, ended 2012 in the black, to the tune of $400,000, and they raised more in 2013 from their broad base of individual Albertans, almost $2.6 million.

Moreover, the first quarter of 2014 was apparently a horror show for the PCs. The Calgary Herald’s Don Braid, dean of Alberta political commentators, reported almost at the moment Alison Redford was resigning that the PC fundraising apparatus had actually turned upside-down, costing more money to operate than it was bringing in.

If you think the departed premier’s troubles were unforeseen by her party, note that last year the Progressive Conservatives reworked the party’s leadership ballot rules to prevent what has now happened twice in a row: a third-place candidate with slender caucus and constituency support coming up the middle and knocking off the machine favourites by means of instant PC cardholders. In essence, the brain trust of the party has decided almost since the moment Redford took office to make sure there won’t be another Redford.

But it is one thing for the party’s leading psephologists and intellectuals to decide that a premier needs the support of the brass, the elected caucus, and the self-selected voters in the party’s open primary process—the three groups to which he or she must appeal, with that last one not quite congruent to the actual electorate. It is quite another to make this actually happen.

It is not as easy as it once was to run a smooth, harmonious Alberta Inc. Redford’s predecessor, Ed Stelmach, turned out to have unexpected ideas about oil and gas royalties. Redford undid Stelmach’s experimentation, which had caused petro revenues to shrink, but she could not deliver genuine budget surpluses in a time of decent oil prices, and went ahead with an orgy of borrowing and infrastructure spending anyway. Both Redford and Stelmach heaved money at public sector unions as a means of bringing warm bodies to the leadership vote. Both left corporate Alberta beginning to wonder whether it was getting enough back for its sterling loyalty.

The first call on the party leadership will belong to a short list of charismatic outsiders who could have it for the asking. Realistically the list is very short indeed, and at its head in 50-point type is Naheed Nenshi, ultra-popular mayor of Calgary. But Nenshi’s higher ambitions, if he has any, are thought not to include the Alberta PCs. His circle overlaps with Redford’s, and he greeted her resignation with a tirade about how she was a blameless victim of deranged partisanship. His reluctance and bitterness probably leaves the party a choice of less exciting outsiders and its own senior ministers.

It is considered almost certain that retired Edmonton mayor Stephen Mandel will run, but he spent much of his decade at the capital berating the PC government for failing to buy everyone in town a flying car and a Slurpee machine. He would create instant Redford-type tensions if he won—though the party cannot stop him if he sells enough membership cards.

Meanwhile, the newspapers are batting around a list of federal ministers and MPs from Alberta who are stacked up in the queue for plum jobs like planes trying to land at a crowded airport. The PC leadership might have appeared attractive to someone like James Rajotte when it last came open in 2011. But now the Wildrose and Danielle Smith have established the potential for a moderate-right populist takeover, and that will ward off candidates of this type.

Alberta’s next premier will thus probably come from Redford’s cabinet. Finance Minister Doug Horner, who finished third in 2011’s leadership contest, looks like an early frontrunner. But he was the nominal creator of the contorted Redford budget process that now claims to have delivered a “surplus”—just ignore those billions in new debt. Failing to put Alberta back in the black with sufficient haste was one of the reasons for the caucus revolt that did in Ed Stelmach so long ago, back in 2011. (Note well: Stelmach was Alberta’s 13th premier. This article is about the search for a 16th.)

Horner says he is considering a run, as are at least three other ministers. They are, frankly, too dull to be worth listing for a national audience. There is nary a ski champion or a half-reformed billionaire playboy in the bunch. Say what you want about Alison Redford, but she had an interesting biography, even if she declined to talk about it much.

The leadership race that put Redford in the driver’s seat, whose timeline was stipulated by Stelmach on the way out, was prolonged to the point of exhaustion. It attracted barely half the final-ballot votes of the 2006 race. This is another source of regret eliminated by the new PC constitution; the party won’t let the horserace slow to a crawl this time. But that will not matter much if the candidates have nothing better to offer than the same old mumbling about good governance [sic] and building Alberta. Who among them can reawaken Albertans’ fast-souring love for its natural governing party? Nobody knows if an answer exists.