How Trump could spin a nuclear strike

Could Trump follow the formula President Truman used on Hiroshima? 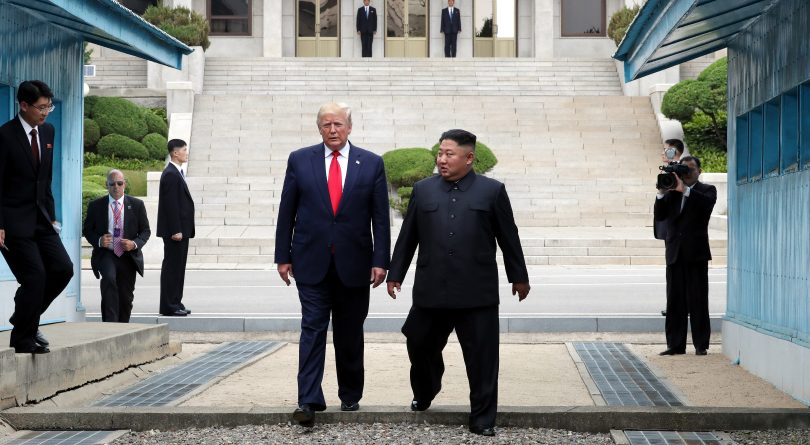 The on-again, off-again nuclear talks between President Trump and North Korean Chairman Kim Jong-un have all the earmarks of a high school romance. There are love letters, furtive meetings, promises, hugs, followed by mistrust, name-calling (“Little Rocket Man,” “mentally deranged U.S. dotard”), threats and a messy break-up. Then Trump storms off to flirt with other dictators (Putin, bin Salman) and Kim angrily fires off some missiles. The weeks drift by, then both men realize they have something special; they owe it to themselves to give the relationship another chance. And the world’s nuclear fate lies in the hands of these two stable lovebirds.

To understand how a nuclear war would actually start and how it would be spun to the public afterwards, it’s worth looking at the last time nuclear force was used. There are surprising parallels between Donald Trump and Harry Truman. Like Trump, Truman was an outsider, labelled “the accidental president,” a Missouri haberdasher caught up in the Democratic machine and thrust into the presidency when Franklin Roosevelt died.

Both men were plain-speaking, and neither president was popular. Truman’s average approval rating through his last four years in office was 36.5 according to Gallup, while Trump averaged 40 during his first two years in office. Like Trump, Truman was given to belittling those who attacked him. When Arkansas Senator Fulbright suggested that Truman resign after his approval rating dropped to 32 per cent in 1946, Truman referred to him as “Senator Halfbright.” When a reviewer disparaged his daughter’s singing, Truman threatened to blacken both his eyes.

Both Truman and Trump were underinformed when they took the job; Truman had no idea America was developing an atomic bomb. Many of Truman’s military advisors advised against its use, including General Dwight Eisenhower, who wrote, “The atomic bomb played no decisive part, from a military point of view, in the defeat of Japan.” Even uber-hawk Major General Curtis LeMay (depicted as General Jack D. Ripper in the movie Dr. Strangelove) said “the atomic bomb had nothing to do with the end of the war at all.”

Japan would likely have surrendered if it had been allowed to keep a version of its monarchy. On August 3, 1945, Truman received a telegram from the Japanese Emperor himself, asking for peace. Three days later, the bomb was dropped on Hiroshima.

In The Decision to Use the Atomic Bomb and the Architecture of an American Myth, Gar Alperovitz argued that the main reason wasn’t to hasten Japanese surrender, but as a demonstration and warning to the Soviet Union. The Russians were still officially allies, but already shaping up to be the next enemy. James Byrnes, the militant secretary of state (similar to Trump’s National Security Advisor John Bolton), argued that “Russia might be more manageable if impressed by American military might, and that a demonstration of the bomb might impress Russia.”

The decision to bomb civilians (90 per cent of the 250,000 dead were civilians) was taken by an assembled “target committee,” made up of scientists, bureaucrats and military personnel. A true military target was never considered, as it wouldn’t gain “the international recognition” they wanted. Kyoto was at the top of the list, but the Secretary of War Henry Stimson insisted it be removed. He and his wife had visited the ancient city in 1926 and he remembered it fondly. Which moved Hiroshima to first choice. Truman saw something biblical in the decision. In his diary he wrote that the bomb “may be the fire destruction prophesied in the Euphrates Valley Era, after Noah and his fabulous ark.”

MORE: Obama at Hiroshima: Death fell from the sky

The public needed a more sympathetic narrative. Henry Stimson wrote a piece in Harper’s magazine titled “The Decision to Use the Atomic Bomb” where he said a million American lives were saved by dropping the bombs. This became the accepted figure. Except it wasn’t true. The official military estimate was 220,000 lives lost in a “worst-case scenario” if the U.S. invaded Japan. But the military may have inflated that number to make a stronger case for a negotiated surrender. At any rate, there wasn’t a need to invade. In 1956, Truman expanded the estimate to “millions of American lives” saved. This myth proved to be stubborn, in part because classified documents weren’t released until decades later, and by then the myth was entrenched and more powerful than its atrocious reality.

If Trump initiates a nuclear strike, ignoring Congress and disregarding military advisors, he may frame it in terms of a decisive, heroic act that saves American lives and liberates an oppressed people. Kim Jong-un will go from “very open and terrific” to the worst prom date in history. Echoing Hiroshima, the bombing of Pyongyang may have more to do with impressing China than discouraging North Korea.

And what is the likelihood of Trump initiating a nuclear strike? He withdrew from a key bilateral nuclear weapons treaty with Russia, pulled out of the Iranian nuclear deal, and announced he will increase the U.S. nuclear arsenal. He has threatened North Korea with a strike, and as a candidate said he would consider nuclear weapons an option to deal with political problems. He is narcissistic and irrational. As Hillary Clinton noted, “A man you can bait with a tweet is not a man we can trust with nuclear weapons.”

MORE: Why it’s crucial that Donald Trump and Kim Jong-un get along

But surely saner heads would prevail. Unfortunately National Security Advisor John Bolton probably doesn’t fall into this category. And it turns out the protocols developed for launching a nuclear strike were designed to limit the power of war-happy generals, not presidents. In December, 2016, The Washington Post ran this startling headline just after Trump was elected: “No one can stop President Trump from using nuclear weapons.” The world could be one angry tweet away from nuclear devastation.

Like Trump, Truman was prone to catchy slogans that weren’t always borne out in reality. His most famous was “the buck stops here.” Though after 30,000 Americans were killed in Korea (a war he entered without consulting what he nicknamed the “do nothing Congress”), Truman shifted the blame to General Douglas MacArthur and subsequently fired him.

“I fired him because he wouldn’t respect the authority of the President,” Truman wrote. “I didn’t fire him because he was a dumb son-of-a-bitch, although he was, but that’s not against the law for generals. If it was, half to three-quarters of them would be in jail.”

Trump largely shares this view, dismissing various Generals and former Generals—McMaster, Mattis, Kelly, Flynn. He tweeted that General Stanley McChrystal was “known for [his] big, dumb mouth. Hillary lover!” If any war or nuclear strike proves to be unpopular with Trump’s base, he will likely shift the blame to his generals.

It has been argued that much of the reason the world resents America was put in motion by Truman, the Truman Doctrine and the idea that the entire world was now America’s business.  He created the CIA, which went on to meddle in foreign elections, and, initially, at least, Truman wielded his nuclear authority like a club. Trump has picked up that legacy and run mad off in all directions. The Trump Doctrine, meanwhile, shifts from week to week, from tweet to tweet, randomly punishing allies and rewarding dictators, though it focuses on Trump’s role in the world rather than America’s.

Truman was divisive as a president and remains so. In one survey he is ranked the seventh best president in history, though the case has been made that he was the worst. A word of caution: before the 1948 election, Truman’s poll numbers dipped to 26 per cent and he was considered unelectable. Everyone thought Thomas Dewey would be the next president. The Chicago Tribune was so sure it ran the headline “Dewey Defeats Truman” on the front page. Yet Truman won. He remained unpopular, and left office with a 32 per cent approval rating, the lowest on record until Nixon eclipsed him. As Truman himself said, “There is nothing new in the world except the history you do not know.”