Hydro One board's pay bump to itself peeves everyone off: Politics Insider newsletter preview

May 16, 2018: Mountie says RCMP spied on him during his lawsuit and Canada sends its congratulations for Will and Kate's baby... three weeks late.

Their Royal Highnesses have been doing a lot lately

The public has yet to reach a clear consensus on this Canada Summer Jobs attestation altercation. A new poll puts affinity and antipathy for the new requirement on par, though respondents generally support funding groups that are morally opposed to abortion—but will spend the money on doing other stuff. [Maclean’s story]

The government knocked back 1,559 applications for attestation-related reasons this year. [Global News story]

Bill Morneau has a “major update” on Trans Mountain, and he’ll be sharing it at 9 am. It’s been a month since Justin Trudeau deputed the finance minister to talk to Kinder Morgan about the project. [CBC story]

Congratulations lost in the mail?

Canada officially conveyed its congratulations to the royal couple—no, not that one—on the arrival of their third infant. Yesterday. Will and Kate’s baby Louis was born three weeks ago; the belated wishes included an invitation to tour with his parents whenever they cross the Atlantic next. (I can cite this when I send my belated Mother’s Day flowers, right?)

Speaking provincially: Doug Ford is traversing the southwestern bit of the 905, with stops in Oakville, Ont., and Mississauga. The premier continues to set the pace in colleague Terra Ciolfe’s travel tournament, even if her party’s on the opposite end of more and more polls. [Chart]

Meanwhile, everyone’s peeved with the board of the province’s power company for giving themselves five-figure pay bumps. The Liberals say they’re looking into it, the NDP wants to re-nationalize it (or -provincialize, one supposes), and the PCs want to fire everyone. [Globe story]

A Canadian-Palestinian doctor was among those shot when Israeli troops fired on Palestinian protestors in Gaza on Monday. His paramedic was killed, along with 57 others. [Globe story] 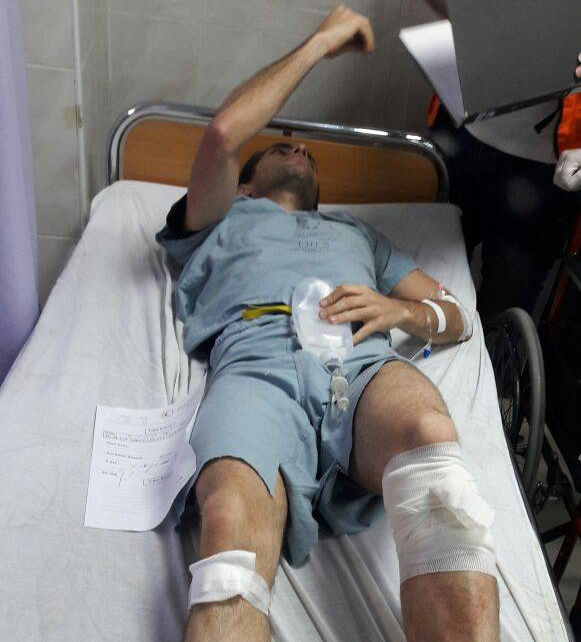 Dr. Tarek Loubani, who was shot on Tuesday, says what he wore clearly showed he was medical staff (Tarek Loubani/submitted)

An RCMP officer says the force spied on him in secret while he was fighting the organization in court, Stephen Maher reports in our (web) pages. The sergeant heard about the ostensible investigation from an ex-Mountie, but says the feds have spurned the suggestion that they look into it. [Maclean’s story]

Also behind the scenes, bureaucrats were happy to hear that the defence minister had flubbed his lines and erroneously cast himself as the key figure in a major battle in Afghanistan all by himself. Well, not happy, more like relieved that the exaggeration wasn’t in the original draft and had probably been added “on the plane over.” You may recall that Harjit Sajjan eventually walked back the claim that he’d architected Operation Medusa. [iPolitics story]

One parliamentary corner offers reliable respite from the heaps of deference to British Westminster tradition. The Salon de la Francophonie, a former smoking room down the hall from the parliamentary boutique, remembers a different empire.

Walk in and be greeted by six portraits to French kings, a bust of explorer Samuel de Champlain, and more fleur-de-lis than a New Orleans Saints tailgate.

The French may have lost all of their New French conquests (save for St-Pierre et Miquelon) but the wood-panelled, red-hued room on the Senate side forever preserves Canada’s other founding nation of invaders.