Two-thirds of homeowners in harm's way turned down a provincial buyout, but some are surrounded by the gap-tooth aftermath of torn-down write-offs. Now what? 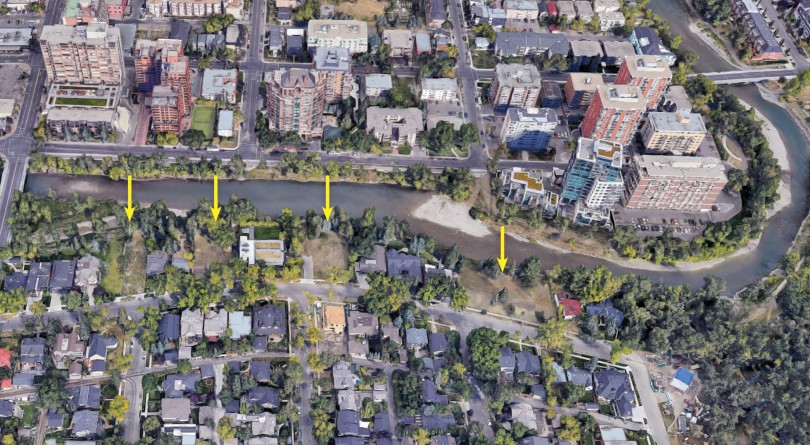 Five years after a flood displaced 75,000 residents and caused billions of dollars of damage, few traces remain of the disaster that submerged much of Calgary. Most of the inundated homes have long been repaired. Riverside pathways, once shredded and debris-strewn, host bicycles and joggers once more. Berms blend into the landscape around the city’s island zoo, where waters had risen to the giraffes’ bellies.

Signs of the flood’s aftermath do remain, though, on a couple of Calgary’s poshest riverside avenues. Literal signs, that is, in black lettering on white background, perched on tidily mowed expanses. “Please keep off grass,” say some a few metres from the sidewalk. “No trespassing,” “No dumping,” “No river access,” say larger ones nearby.

Scattered along Roxboro Road and Riverdale Avenue, they were put up by the Alberta government, which also owns the grassy lots on which they sit. The vacant properties create a gap-toothed look to rows of million-dollar homes—some from the early 1900s, some mid-century, some modern McMansions, a few almost eerily missing.

READ MORE: Floodplain living isn’t a luxury. It’s a reality we have to deal with.

In one of the provincial government’s most questionable—and priciest—post-flood protection measures, it wound up spending $51 million to erase 17 homes from the Elbow River, and now Alberta taxpayers spend $50,000 a year to mow the empty properties’ lawns and clear snow from their sidewalks. The government originally intended to shell out a whole lot more, buying out all the houses that fall within what is known as the river’s floodway—the red zone on flood-hazard maps where waters will wreak the most damage when they surge again. But the buyout program, launched by the government weeks after the 2013 disaster, was voluntary. Alberta cabinet ministers didn’t want to wage expropriation wars with some of the province’s richest residents, and they didn’t expect so many homeowners to refuse. Two-thirds of eligible homeowners declined, either because the cash offered was below pre-flood market value or because the residents preferred to restore their homes and accept the risks of living directly in the path of a future flood.

Though the flood spilled three inches of water over the main floor of her two-storey home, Monique Beaumont didn’t consider giving up her 1912-built abode on Roxboro, one of the few Calgary backyards that kiss the river. The retired designer repaired her home and expressed something between hope and confidence she’d never get hit with a big one again. Her next-door neighbour and that owner’s other next-door neighbour were among the few who accepted the offer. For a couple of years after the flood, Beaumont lived next to two vacant houses, until antsy residents urged the province to end the risk of attracting squatters and demolish them. Now, with a bare double lot next to her, she says she enjoys the extra light and towering elms. “But it’s sort of a strange feeling,” she says. “I’d rather have a neighbour.” She’s pleased the no-trespassing signs have worked at deterring passersby and sunny-day river rafters—the province had earlier mused about converting those parcels into miniature parks, but the oil executives, lawyers and retired professionals who live around them persuaded the government not to.

Community advocates and politicians have called the buyout program a colossal waste. The missing homes serve as constant reminders of the disaster, adding to anxiety that returns with each late-spring melt, says Tony Morris, who lives a few blocks from Roxboro Road and leads the Calgary River Communities Action Group. “Thoughtless or badly conceived policy can be more destructive than the waters themselves,” he says.

RELATED: One year since floods swept through southern Alberta: people gather to remember

There was solid science behind removing all homes from the floodway zone. During a major flood, the floodway becomes part of the swollen river, and structures impede the flow, causing a diversion known as backflow, which raises floodwaters. Getting rid of a single home here or there will have “a vanishingly small positive effect on the river,” says Jerry Osborn, professor emeritus of geoscience at the University of Calgary.

Alberta’s former Progressive Conservative government hatched the optional buyout during the summer of the flood, nearly two years before it decided to construct larger upstream flood protections. It settled on a 1,500-hectare, $432-million dry-reservoir storage project just west of Calgary. Regulatory reviews and pushback from landowners have delayed construction; it’s now scheduled for completion in late 2022, nine flood seasons after the catastrophe that sparked its creation.

The current NDP provincial government has long criticized the buyout program it inherited, but has supported the idea of a dry reservoir, which would greatly reduce flooding risk along the Elbow. Once that project is complete, officials are willing to consider reselling the buyout properties for development. “If it is determined that it’s safe to return these homes to residential use in the long term, and that is what the community wants, then that is what we will do,” spokeswoman Lauren Arscott says in an email. Community leaders in the flood zone would prefer not to wait four years to fill in those gaps on Riverdale and Roxboro roads. But the province doesn’t appear willing to accept the liability of letting people rebuild too soon.

While many neighbours welcome the idea of the provincially mowed and untrammelled lots being redeveloped, not all homeowners are as keen. With a bunch of empty lots suddenly hitting the market, “the value of everyone else’s property would go down,” says Terry Fishman, who lives next to a buyout parcel on Riverdale. He admits this may be a selfish rationale. But floodwater isn’t the only hazard such homeowners want to protect themselves against.