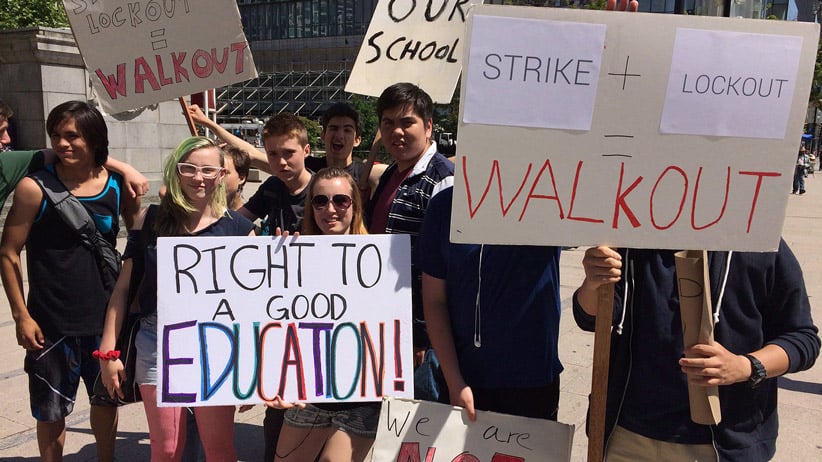 Nothing comes easily when the subject is teachers’ negotiations in British Columbia. The perpetual clash over salaries and education funding is, according to Worlds Apart, a 2011 book by University of Victoria academic Thomas Fleming, “a conflict that has been, without question, the single most defining characteristic of public education in the province for the past four decades.”

Little has changed to smooth things over in the past three years. In April, the BC Teachers Federation (BCTF) began an escalating series of job actions. Teachers first refused to supervise students outside of class time, or to communicate with administrators. Rotating strikes followed, closing every school in the province one day per week. Finally, a province-wide walkout in June shuttered all schools two weeks early. Forcing an abrupt end to the school year has long been the ultimate weapon in any teachers’ union arsenal.

The BCTF argues that provincial education funding must be boosted to bring B.C. up to national averages. The province comes last in educator remuneration per pupil, for example, and has the highest student-to-educator ratio in the country. The government replies that there’s no evidence to show austerity affects education quality. According to the Conference Board of Canada, B.C. is the highest-rated province on education and skill outcomes. And, in the 2012 international PISA test (Programme for International Student Assessment) of 15-year-olds, B.C. students were ranked first in the country in reading and science and second in math.

Now, however, the government has revealed a new tactic of its own. Last week, Finance Minister Mike de Jong announced that if the strike is not resolved by September, the province will give every parent of a child under the age of 13 a payment of $40 per day to spend on child care, tutoring or whatever else might make a school-less weekday bearable. The proposal is to be budget-neutral, funded out of the $12 million the province saves daily from not having to pay striking teachers. The money is to be paid out in a lump sum once the strike ends.

While the move has been widely panned as insufficient—certainly, no one claims daycare is a proper substitute for classes—and/or a sign the government is not committed to ending the strike before the new school year, the $40 promise is, in many ways, revolutionary. For the first time in memory, a provincial government has a credible contingency plan to deal with a prolonged teachers’ strike. And, at least some taxpayers will be compensated for the loss of an essential service.

Why is this significant? Public sector unions typically have a monopoly on their services. And, in the event of a strike, governments are often caught between the demands of strikers and complaints from citizens who find life more difficult because of such strikes. Rather than go through the slow and complicated process of real negotiating, governments often cave quickly, paying too much to buy labour peace, or they resort to legislative fireworks, such as back-to-work laws or other legal measures, which violate the essential rights of workers. B.C. recently lost a major court case as a result of such tactics in an earlier dispute with teachers.

To its credit, this time around, the province has vowed not to impose a settlement on teachers. Rather, the goal is to come to a negotiated, long-term contract. The best shot at that is a situation in which both parties have equal motivation. Meeting the threat of a lengthy teachers’ strike with a plan to compensate parents for the loss of daily schooling creates a balance of power that should allow both parties to find a reasonable, long-term settlement. The union threat of social chaos arising from closed schools has been blunted, giving the government time and space for proper negotiations.

Further, if directing savings from public sector strikes to taxpayers’ pockets proves successful in prompting a reasonable settlement in B.C., perhaps it could become a useful template for labour negotiations in other circumstances, as well. Consider, for example, a municipal garbage strike where taxpayers are compensated for hauling their own waste to the dump. Not only does this redress the hardships caused by public sector strikes, but it provides a handy reminder that it’s taxpayers who foot the bill for these contracts in the first place.

The most productive and fruitful negotiations are those in which both parties have equivalent power and face similar risks. Compensating taxpayers for their losses from savings generated by a strike balances out the power in public sector labour talks and gives everyone a reason to settle. That seems like $40 a day well spent.