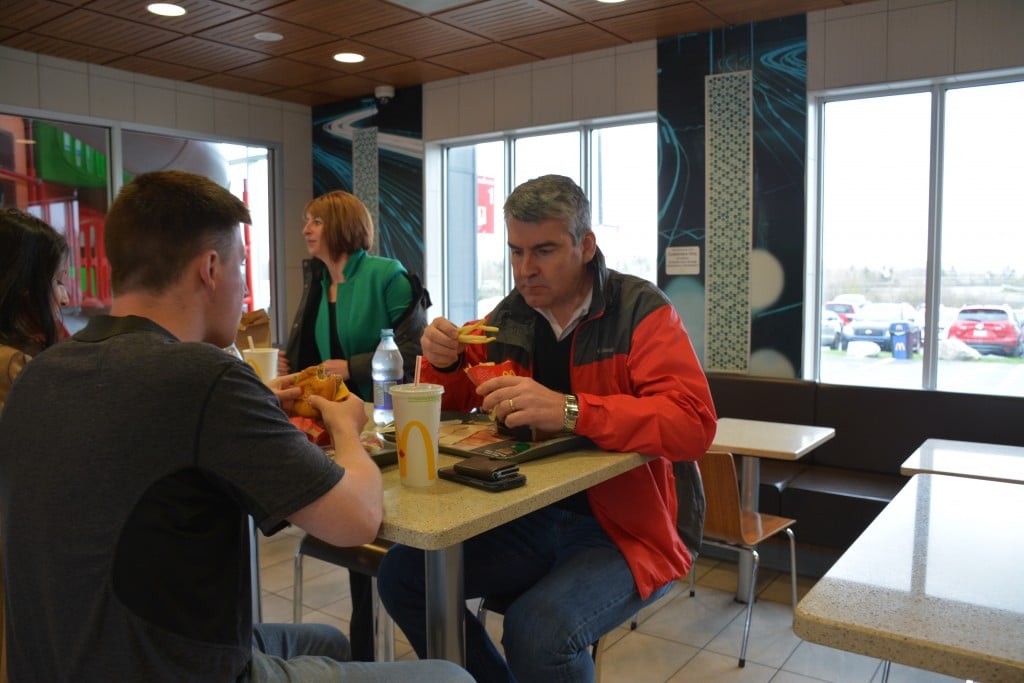 Nova Scotia Premier Stephen McNeil is executing a choreographed lunch at McDonald’s. At 12:31 p.m., he orders a Mighty Angus burger combo—“I might go all out”—and digs into his jeans pocket for five-dollar bills. He eats his tray full of calories for the cameras, his mighty hands dwarfing the fries so they appear the size of twist ties.

With a provincial election on May 30, McNeil is making a valiant effort to be personable. The six-foot-five leader is known as a fiscal hawk who has slashed spending in hospitals and schools, frozen taxes and broken up the provincial monopoly on hydro. However, after populist politics figured large in federal Canadian and American elections, McNeil’s second campaign pushes his likability. Nova Scotians have historically voted for straight-faced figures, yet McNeil’s new approach—so far giving him a double-digit lead in the polls—suggests they now demand a leader who they’d like to sit down with for a burger. “Pound it,” he says to a boy who approaches him on the campaign trail, offering his fist.

Before repairing Nova Scotia’s debt, McNeil repaired refrigerators. He trained at Nova Scotia Community College and founded McNeil Appliances, honing the skill to fix iceboxes but not so much the charm to sell them. After becoming a member of the legislative assembly for his hometown, Bridgetown, he ran for the leadership in 2007, expecting the province to continue electing NDP or Conservative governments. “I thought my job was to rebuild the party,” he says. “I didn’t run to be premier.”

But premier he became, with a plan to skim fat off government spending. McNeil got rid of CEOs and vice-presidents in the health sector by amalgamating nine district authorities into one. His government forced 2,400 nurses back to work during a strike, as it did for teachers, who began working to rule after he stunted the rise in their salaries. McNeil ended the monopoly of Nova Scotia Power by enabling private hydro companies to sell directly to residents, though the companies still pay tariffs to Nova Scotia Power. On his annual trade missions to China, he says, “I get asked about Anne of Green Gables a lot. I say, ‘No, she lives next door.’ ” 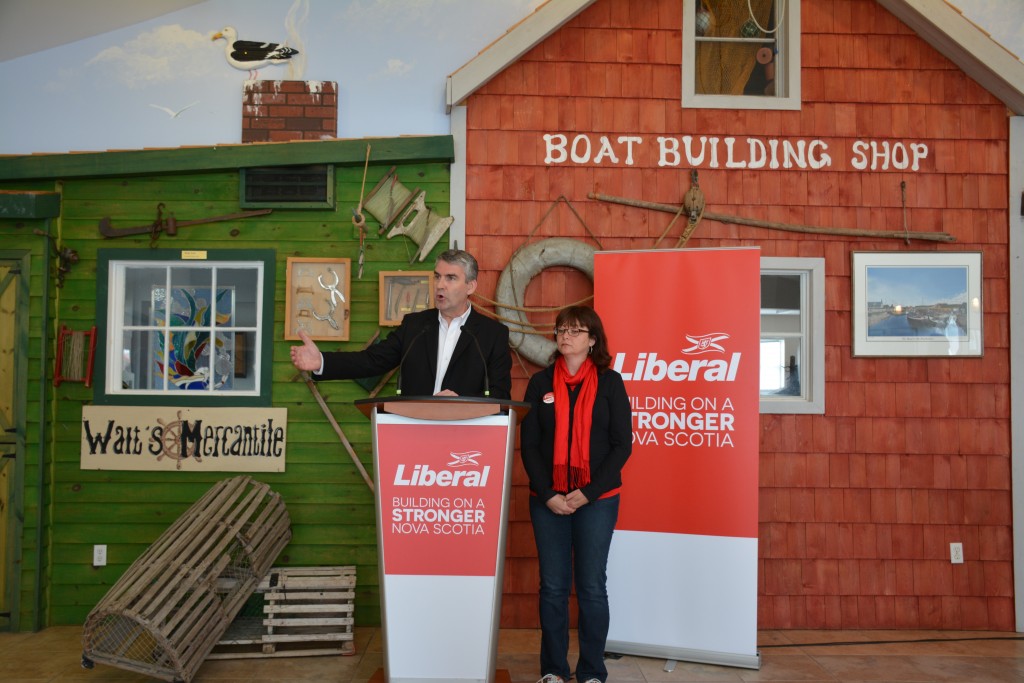 McNeil likes haddock, bocce ball and warming up by the fire, but in the past, the former fridge expert has come off a bit cold. He talks little of his siblings except for their number (12), or of his wife and two grown children, who still live in Nova Scotia. He rarely mentions that when he was eight, his father choked at the dinner table and died. “I bring it up if people want me to talk about it,” he says. When people want him to talk about it, he tells them simply: “My mother ushered us upstairs.”

David Johnson, a professor of political science at Cape Breton University, says of the Premier, “over the last four years, he’s had a bit of an image of the old austere deficit-fighter. Having taken the action to balance the budget, he has the opportunity to spend money … and to soften his image, to give the impression that he’s as much concerned about social policy as he is taking a tough-minded business approach.” Johnson adds, “to do well in Nova Scotia politics, you have to come across as everyone’s favourite uncle. I haven’t really quite seen it in Stephen McNeil. Maybe he doesn’t have that warm, fuzzy personality, but he’s working on it.”

Meanwhile, NDP leader Gary Burrill is a mandolin-playing United Church minister who made his children take fiddle lessons at five and raised two award-winning musicians. He promises free tuition for university students and double the number of midwives, and nearly half of his team’s candidates are women, compared to McNeil’s 12 out of 51. Burrill has called the incumbent “morally deficient,” as have Halifax university students, who, before 2015, would group McNeil with Stephen Harper by chanting, “hey hey, ho ho, all the Stephens got to go!”

Progressive Conservative leader Jamie Baillie is a trained accountant, but he is known just as much for his love of curling. His platform vows to give free fishing licences to seniors while ensuring they have good food and are kept with their spouses in long-term care. Baillie goes by a nickname for James, but McNeil is always Stephen, Premier McNeil, or “the very tall man behind the podium.” 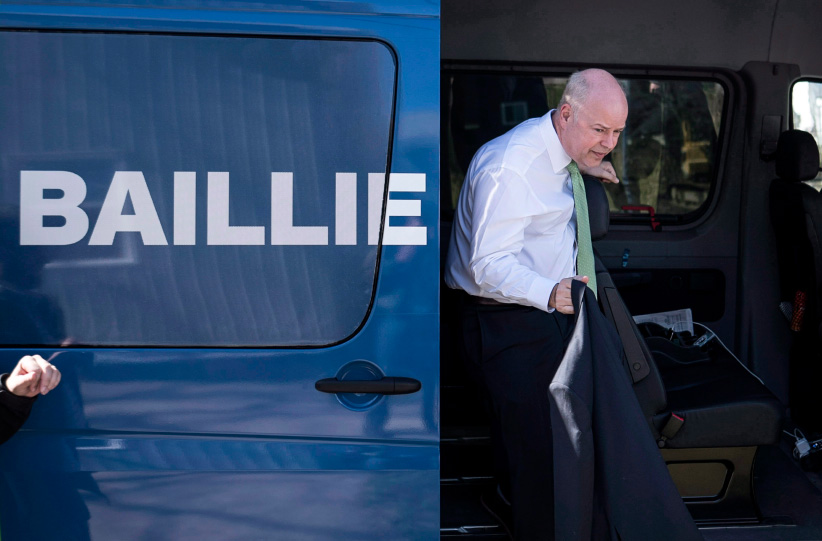 In the past, Nova Scotians have actually preferred lint-rolled leaders. From lawyer Darrell Dexter to John Hamm, a doctor, they have voted for people with an air of “noblesse oblige, almost,” says political scientist James Bickerton of St. Francis Xavier University. “Nova Scotians have opted for a more patrician figure,” he says of past elections, with the exception of John Buchanan in 1978. In fiscal action, McNeil has out-performed premiers in Alberta, Ontario, Manitoba and all the other Atlantic provinces, according to The Fraser Institute in 2016. But with the local paper, the Chronicle Herald, on strike for the past 15 months, Bickerton suspects McNeil’s platform, once released, will only get skimmed.

More attention may be on McNeil’s face, which is why he shaved his beard. “Unlike [Thomas] Mulcair, I have a full head of hair and glasses,” he explains. After watching himself on TV, he says, “I realized people weren’t listening to me. They were looking at my beard. Whenever I have a few days off, I let it grow, just to see. It wouldn’t be dark. I have some white patches in there.”

He doesn’t have days off this month, but he brings a blanket on the campaign bus to nap on the onboard couch. A door protects his privacy, but he has a bungie cord to hold it ajar to the rest of the team. He wears polka-dotted socks, thanks to fellow Liberal Joachim Stroink and his son. “That’s one thing that happened in the last three and a half years,” he jokes. “They got me wearing colourful socks.”

After visiting a metal factory, McNeil finishes the day on a sidewalk in Dartmouth, where he waves to commuters crossing the bridge from Halifax. He ducks under a supporter’s umbrella to give her a hug. He once waved liked this alongside Justin Trudeau and the late MLA Allan Rowe. “They both had great hair,” says McNeil. “My hair’s okay.”

UPDATE, May 18, 2017: This article has been updated to include the input of David Johnson, political science professor at Cape Breton University.