In the heart of America, Trump is the only politician they know

With the midterm elections looming, Allen Abel visits a tiny town in Kentucky where only one name stirs interest—for better or worse 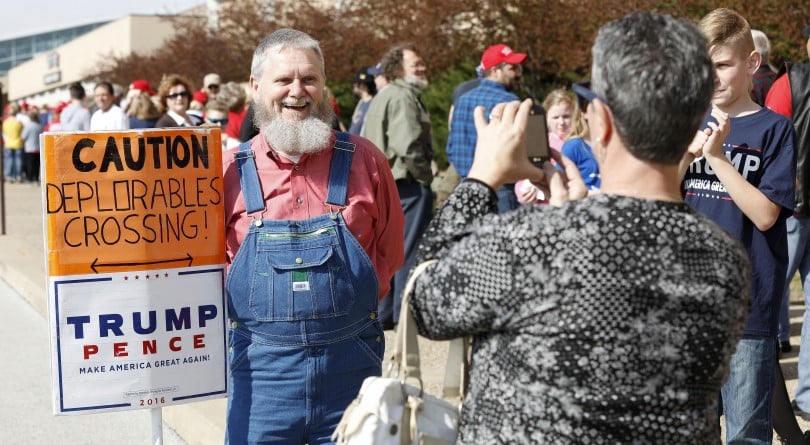 A Trump supporter in Louisville, Ky., where U.S. President Donald Trump spoke at a rally in March 2017 (Photo by Bill Pugliano/Getty Images)

It was sunny and raining in Gratz, Kentucky, when the tire pressure light came on. The rental car, a miniature four-door Korean, already stank like a drowning ashtray and it guzzled gasoline like sweet tea and on the back roads—where the yellow signs warned BREAK IN PAVEMENT every couple of miles—the wheels made so much noise that you couldn’t hear Rush Limbaugh snarling on the AM radio out of Louisville.

Now, to cap this luxury cruise, at least one of the premium radials was gasping for air, and a reporter can’t wander around Middle America—from Gratz to Muncie, Ind. to Knoxville to the Cumberland Gap—gathering the atmosphere in advance of the November congressional elections, without enough air in his tires.

Downtown Gratz—population 78, probably fewer by the time you read this—was so lifeless that the crickets were chirping in the middle of the day, just for something to do. The combination food store, restaurant and B&B on Main Street was vacant and for sale, the post office closed in 1990, two old highway-department trucks were decaying in a gravel yard with bushes growing through them, and even the Kentucky River, once one of the main arteries of commerce of this part of the United States, was rushing through town without stopping.

According to a memorial plaque in the centre of what must have been a bustling riparian village in a much earlier century, Gratz already was so diminished 50 years ago that she had only one son available to get killed in Vietnam. But the Citizens Union Bank still was open, and the tellers in there said that the Marathon station up on the main highway was sure to have an air pump; that, and fascinating people to talk to about the local and national zeitgeist in autumn, 2018.

They were right about both.

The Marathon station turned out to be a combination lunch counter, supermarket, chewing-tobacco emporium, scratch-off Bellagio and gathering place for the weathered citizens of this withering hamlet. (Kentuckians are not exactly effete; the hand soap in the men’s washroom was Extra Strength Ajax.) Among the human remainders were a fellow named Woodstock who actually had been there back in ‘69, and a woman in black named Pinkie who was wearing two pairs of eyeglasses at the same time because one helped her see close and the other helped her see far, so by employing both she could see everything just fine.

Behind the register were the cashiers-slash-fry-cooks Tara and Laree who had been waiting, it seemed, at the Marathon gas station in Gratz, Kentucky all their lives for a reporter from Washington to walk in.

The first thing Laree Howe said was, “My son’s an addict. But he’s been clean for two years. He’s back working again.”

“There was a pretty good hockey player named Howe,” she was told.

“There was?” responded Laree.

“I was the prettiest girl in Gratz,” said Tara, whose last name was Peyton. “I won the lottery without ever having to leave.”

“It’s a good thing I watched CNN and caught up on the world before you came in,” she added.

“I feel like nothing that they do in Washington really affects us,” Laree offered, but then she said, “Of course it does. I know it does. It just seems so far away.” Ms. Howe HAD left Gratz, Kentucky; she had married a soldier and they lived in Germany before she left him and came home to the bluegrass.

“We’re just supposed to be ignorant hillbillies,” said Tara Peyton. “But there’s a lot of ignorance in Washington, too.”

Laree said that she was a Democrat but she really didn’t know why, probably because her father, a tobacco farmer, was a Democrat, and so was his father, and so on, back to Henry Clay or Andrew Jackson in the 1820s or something like that. (They still grow tobacco in Owen County, Kentucky. There was a field of the deadly crop, so golden and beautiful in late summer, right behind the Marathon.)

Howe said that she had voted twice for Barack Obama, but his hopey-changey reign, she said, “didn’t really turn out the way we thought it would.” She had cast her ballot for Hillary Clinton in 2016, while Tara confided that she hadn’t voted at all.

“Do you know who your Member of Congress and your Senators are?” Peyton was asked.

“No,” she shrugged. “I live in Gratz.” (But she knew Kentucky’s governor, Matt Bevin, because he had sent a letter to Peyton’s daughter, congratulating her on getting straight A’s as a high school freshman.)

Her senators, of course, were two Republicans—the say-no-to-everything Dr. Rand Paul and Majority Leader Mitch McConnell, whom Rush Limbaugh calls “the Turtle” and who, at this very instant, was trying to save the Supreme Court nomination of Brett Kavanaugh, back in the capital of representative republican government.

RELATED: Why people hooked on opioids, especially in the U.S., keep falling through the cracks

“I don’t like to have to ‘press 1 for English,’” she complained, not that one needed a second language to converse with Woodstock or Pinkie or anybody else in Gratz, Kentucky

“I like the Border Patrol,” said Laree, the Democrat. “I think there should be a wall with Mexico. Lock it down. I agree with Trump on that.”

“I might have to vote for him next time,” she said.

“If there was one thing you could tell Donald Trump, what would it be?” the clerks were asked.

“Get rid of the heroin,” both of them replied.

As it happened, on this very day—at this exact hour—in far-off, ignorant Washington, the United States Senate was approving, by a vote of 99 to 1, a bill that will reduce the length and quantity of opioid prescriptions, enable the United States Postal Service to militate against the flow of synthetic drugs from China, empower states to buy back unused medicines, and fund the research and development of non-addictive painkillers.

“A comprehensive crisis demands a comprehensive solution,” said Mitch “the Turtle” McConnell. Even Rand Paul voted Yea. The voices of Gratz, Kentucky had been heard.

The air pump was around the north side of the Marathon—50 cents a blast. It was getting windy, and the last shreds of Hurricane Florence were irrigating the cancer fields up the hill.

A traveler squatted in the mud in his good beige chinos and filled the tires to 35 psi, then 40 for good measure. Back in the limousine, on the high road out of Owen County, the damn light still wouldn’t go out.