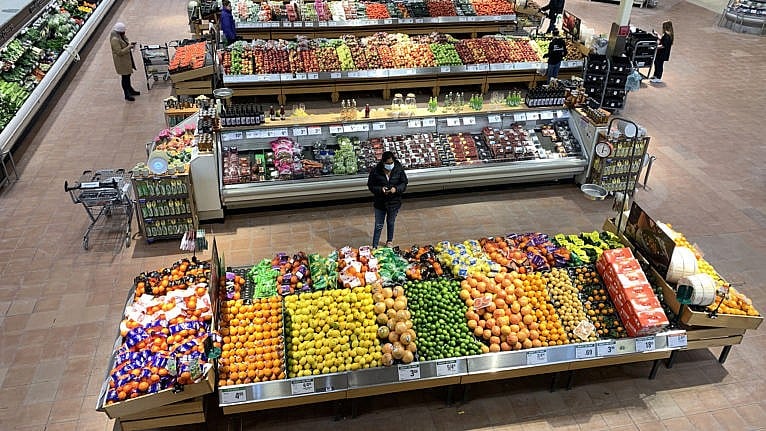 Vegetables and fruit are on display at a grocery store in Kingston, Ontario, January 24, 2022. (Lars Hagberg/The Canadian Press)

Inflation rose to 6.7 per cent in March, far more than economists were expecting and a full percentage point higher than February’s already 30-year high, CBC reports.

Statistics Canada reported Wednesday that all eight categories of the economy that the data agency tracks rose, from food and energy to shelter costs and transportation. “The spike in prices over the month of March is the largest monthly increase since January 1991, when the goods and services tax was introduced,” economist Royce Mendes of Desjardins Group noted.

While the cost of just about everything is going up fast, transportation costs are leading the way, up 11.2 per cent in the past year. A big reason for that increase is the 39.8 per cent rise in gasoline costs since March of last year.

Who is to blame? Inevitably, there is some finger pointing about this state of affairs. In the Star, Heather Scoffield writes that some of it is likely warranted.

Ottawa didn’t see inflation coming when it issued all that pandemic aid. The central bank didn’t see it coming when it cut rates to near zero and bought government bonds en masse to keep financial markets functioning smoothly. Those were the right decisions to take at the time, when inflation was nowhere to be seen and COVID-19 meant a shutdown of many parts of the economy, throwing people out of work. In hindsight, while they could perhaps have withdrawn their support sooner as they saw labour markets recovering, there’s an open question about whether Canada alone could have tempered the inflation problem surging around the world right now.

Walkout: Chrystia Freeland and Canadian officials joined allies in a walkout of a G20 meeting in Washington, D.C. on Wednesday in protest of Russia’s involvement, CTV reports. Freeland tweeted: “This week’s meetings in Washington are about supporting the world economy – and Russia’s illegal invasion of Ukraine is a grave threat to the global economy. Russia should not be participating or included in these meetings.”

A government source said Freeland also spoke directly to Russian officials who were present in-person, telling them they are complicit in war crimes.

No details: Justin Trudeau remained tight-lipped about Canada sending heavy artillery to Ukraine, citing “operational security,” CTV reports. Trudeau said Tuesday that Canada would be sending heavy artillery to Ukraine in response to a request from Ukrainian President Volodymyr Zelenskyy. When pressed on Wednesday, the Prime Minister had little else to say: “For reasons of operational security, I can’t go into the details at this point on how and what we’re getting to them exactly. But I can assure you we will have more to say in the coming days.”

Polarizing Pierre: Pierre Poilievre looks well ahead in the CPC race, but he may not be able to broaden the party’s appeal, according to an Ipsos poll for Global News.

“We’ve really got this tale of two candidates,” said Sean Simpson, vice-president of Ipsos Public Affairs. “One of them is very popular with the party, but not outside the party. And the other one, the exact opposite is true. So Conservatives have a clear choice ahead of them.”

Polarized: Poilievre held (another) big campaign event on Tuesday, this one at Toronto’s Steam Whistle brewery, whose management handed out a letter disassociating themselves from his views. In the Star, Susan Delacourt writes that that unusual letter shows where politics is headed in this country: “a harder, more polarized place, where personal and business reputations can get tarnished by association.”

Poilievre’s supporters were bristling at Steam Whistle’s disclaimer on Tuesday night, eager to see it as another example of “cancel culture” and Conservatives being punished once again for being politically incorrect. But Poilievre has been whipping up the polarizing rhetoric himself at his big rallies, presenting Canadian politics as a simple battleground between the “gatekeepers” and those who want to storm the gates.

Centre Ice: Speaking of polarization, a group of centrists conservatives has launched a group to promote moderate Conservative voices and appeal to blue Liberals, the Star reports.

Left field: Press Progress reports that Leslyn Lewis has warned supporters of a plot by Bill Gates and the World Health Organization to undermine Canadian sovereignty.

Rents condo: Poilievre owns a Calgary rental property even as he blasts the unfairness of Canada’s housing market for young Canadians, Global reports.

For more housing: Poilievre almost sounds like he is OK with home owners taking a hit in value if it means more houses get built, Chris Selley writes in the Post.

No truck tax: CBC’s Aaron Wherry has a mildly depressing column about what appears to be a thoroughly made-up Conservative attack on the Liberals — the allegation that they are going to bring in a truck tax.

Dental showdown: There is likely to be a jurisdictional battle with the provinces over the dental care program that’s a centerpiece of the confidence deal between the federal Liberal government and the NDP, the Post reports.