Is a premiers' summit worth boycotting?

Indigenous leaders maximized attention by snubbing this year's provincial and territorial confab. But this isn't the table they really want a seat at. 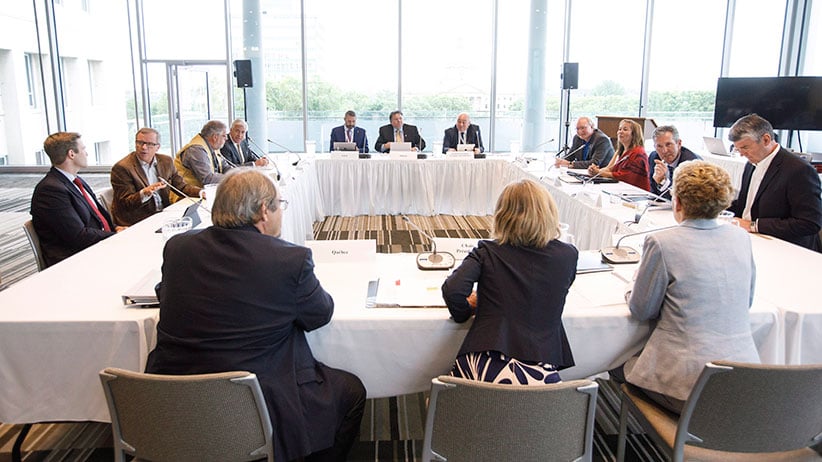 Brad Wall is the dean among premiers—he’s represented Saskatchewan since 2007—and he joked at his 10th Council of the Federation meeting that his province’s populace may not be as keen to have him at any more of them.

But the true veteran of these annual gatherings is Clement Chartier, who was elected president of the Métis National Council in 2003—the same year premiers launched their summer meeting club and began having annual one-day meetings with Chartier and other national Indigenous leaders before the provincial and territorial premiers held their multi-day meetings, just the 13 of them.

“I’ve been going to these for the last 13 years,” Chartier told CTV News Channel on Monday. “I’m really not sure we had any effect on policy. A lot of it was simply photo ops with no substance.”

This year, the Métis leader opted to sit out the premier’s gathering, along with Perry Bellegarde of the Assembly of First Nations, and Natan Obed of Inuit Tapiriit Kanatami. Rather than travel to Edmonton on Monday where the premiers were, they flew to Toronto (where most of Canada’s media reside) to declare their displeasure at not being given adequate seats at the table at intergovernmental meetings.

Bellegarde spoke of being “segregated and subjugated” when Ottawa and the provinces gather, occasionally getting token acknowledgement or slotted time to talk—feeling more like interest groups than full partners in Confederation. So many issues, from education to health to climate change and energy, have as direct bearing on Indigenous jurisdictions as they do on provinces.

“We don’t have to and we should not have to fight to be at those tables. It just makes sense,” Bellegarde said.

RELATED: Off to a tense start: Justin Trudeau meets the premiers

These are important points, and there’s no disputing the Indigenous leaders were able to maximize attention by making their stand on the day premiers hoped to be photographed alongside Indigenous leaders and afterwards announce they have discussed many vital issues facing provinces and Indigenous groups, and will continue to work towards action on these vital issues.

The Indigenous leaders also had little to lose. Decisions of consequence, after all, are seldom made at premiers’ summits, which lack the clout of first ministers’ meetings when the cheque-writing, decision-making prime minister shows up. Chartier et al have seldom missed much by being excluded, and no doubt they calculated they weren’t likely to do so in Edmonton, as “Indigenous day” tends to be a prelude to the even greater non-event. Last year’s interprovincial trade deal announcement was one of the rare times in the organization’s 14 years that much of consequence was actually accomplished. (Canadian energy strategy? Remember that? No? Fair.)

But in part because the Council of the Federation inherently isn’t a decision-making body, it’s not clear that skipping this meeting makes the point they wanted to. It’s the federal-provincial tables that Chartier, Bellegarde and Obed clamour to be at, as an indispensable third party. Yet the premiers this year don’t seem overly fussed that Prime Minister Justin Trudeau chose to pay a visit to a U.S. governors’ meeting last week while forgoing their own; he didn’t attend last year’s either, continuing the habit set by Stephen Harper (Trudeau did meet with them at a climate-change conference in March 2016). That’s because this is the premiers’ opportunity to meet on their own and formulate consensus (or, often, fail to do so) about key issues, and set down their own advocacy and lobbying points for Ottawa.

The first premiers’ summit under the council format, in 2004, was called specifically to form a united front before a First Ministers meeting with then-PM Paul Martin to hash out a new health accord. The premiers figured out their collective argument, and secured from the federal Liberals a six-per-cent annual health transfer increase over 10 years—not the fix for a generation that Martin touted, but enough to keep provincial health budgets fairly plump until Harper later curbed the annual increases. (Before that initial premiers’ meeting, too, an initial gathering with Indigenous leaders was held on the structurally distinct issue of Aboriginal health.)

RELATED: Why the PM won’t meet the premiers

In this way, the Council of the Federation is not unlike the Assembly of First Nations, where 634 First Nations chiefs gather to forge common ground and then convey them through Bellegarde, their national chief. If there are indeed three distinct partners in Canadian federalism—federal, provincial/territorial and Indigenous–then that second level’s representatives should be allowed their own meeting, without the prime minister or Bellegarde and his two colleagues at their side for the full session (as the three boycotting Indigenous leaders suggested).

On Monday, the premiers went on with their meeting as scheduled, discussing children in care, missing and murdered women and socioeconomic issues with the Native Women’s Association of Canada and the Congress of Aboriginal People—two other regularly invited groups that weren’t informed of their counterparts’ boycott, and who were happy to take any opportunity they could to be heard by the premiers. Premiers said they wished that process didn’t overwhelm the day’s public discussion, but were careful not to criticize the boycott.

Wall, who’s started every premier’s meeting since his first one in 2008 with a sit-down with the Assembly of First Nations, Métis council and other groups, said he wasn’t sure how to make Indigenous leaders feel more welcome. It’s a question that should surely be asked of Trudeau, who has promised Indigenous peoples plenty. But the PM’s territorial and provincial colleagues may yet have a role to play. Premiers are great at pushing Ottawa to improve the provinces’ lot; perhaps they could use their heft to elevate Indigenous voices when all federal players are meant to meet.