Is Doug Ford the populist hero Canadians are looking for?

If Ford can take over the PC party on March 10, his promise to fight for the little guy could well propel him to a Trump-like victory in Ontario 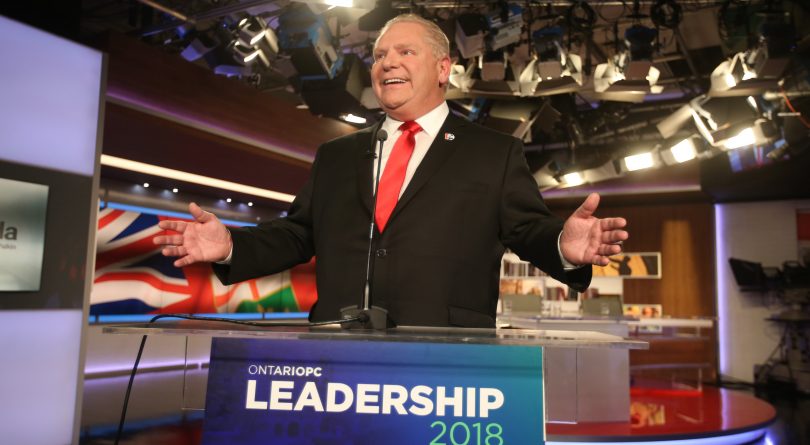 White corriboard signs donning “Ford” in blue block letters are plastered between shrines of Hindu deities in the expansive hallway of the Sringeri Community Centre. In the past three weeks, Doug Ford has visited nearly every town in Ontario in a frantic bid to become the province’s next PC leader. Now in the final days of the race, he’s come home to an impassioned crowd of supporters in the Toronto suburb of Etobicoke.

Inside the ornate community hall—adorned with crystal chandeliers and red velvet accents—is a snapshot of Toronto. About half of the 450 attendees are visible minorities. Many are middle-aged or older and most are men, but a faction of youth and women have showed up as well. The crowd—Ford Nation—leaps to its feet, whooping and whistling as Eye of the Tiger booms over the sound system and Ford takes the stage with promises to make Ontario prosperous again. He’ll “sanitize the [PC] party,” he says, and eliminate taxes for anyone earning less than $30,000 a year. He’ll save the manufacturing sector and make housing affordable. He’ll get rid of job-killer Kathleen Wynne.

It’s hard not to draw comparisons between Ford and Donald Trump. Both are businessmen and political oddities who purport to shun the elite and speak for the working class. They harness fear of the future and nostalgia for the good ol’ days—for legacy industries and unbridled energy consumption. Both represent a growing appetite for populism among various disenfranchised demographics.

“[Doug Ford] is so much like Donald Trump that I could have predicted almost everything Trump has done by asking ‘what would Doug Ford do under those circumstances?’” says Toronto City councillor John Filion, who worked with Ford on council from 2010 to 2014 and wrote a book on Ford’s brother, Rob, called The Only Average Guy. (Ford vehemently denies any likeness with Trump.)

READ MORE: Some advice for the Ontario PC Party for its next leadership race

Tempting as it is for Liberals and traditional Conservatives to dismiss Ford, like they did Trump, his leadership is a real possibility. Polls show he’s been neck and neck with Christine Elliott for most of the PC leadership run. While Ford (and his family) have long been revered by a particular segment of conservative voters, there’s something unique about today’s political climate—globally and at home—that makes someone of his ilk especially alluring right now.

“There is definitely populism happening in Canada, as it is in all other advanced western societies,” says Frank Graves, a pollster and president of EKOS Research. “This is a product of a period of economic stagnation for many and disappointment with the elite prescription that was supposed to make everything better, but has left an awful lot of the population feeling very very poor about their economic future. We see that very much in the conservative constituency in Ontario right now.”

EKOS and the Canadian Press polled 12,604 Canadians in late 2017 to learn more about populist attitudes. Thirty per cent of respondents reported feeling economically and culturally insecure, and another quarter—“the swing group”—had a mixed view. “The received wisdom amongst the commentariat in Canada is that populism isn’t happening here; that we’re inoculated from that because, you know, we’re just a more virtuous society,” says Graves. “I just don’t see that in my data at all.”

That said, Graves notes that Canada’s brand of populism differs from the movements that drove Trump’s presidency in the U.S. and Brexit in England. “It doesn’t tend to be as focused in the white working class,” he says. “In Canada it’s more the working class and those who are falling backward. There’s no difference in the appetite or support for populism amongst visible minorities and old stock Canadians.”

Mawbbi Hargo stands out at Ford’s Etobicoke rally—not because he’s a visible minority, but because, at a glance, the 31-year-old construction worker, passes for a sharply dressed downtown Liberal elite.

Speaking with him, though, his concerns, and reasons for voting Ford, are similar to the others at the rally. “I haven’t worked in Ontario since 2013,” says Hargo, who’s found more lucrative work in his field, building water towers, out West. “It would be nice to be back here,” he says when asked why he’s voting Ford, adding: “Hearing Doug talk about spending more infrastructure dollars here, and saving taxpayers’ money—sure, why not?”

Another attendee who works in the health care field has taken to Ford’s pledge to “listen to health care providers” and improve the system for patients. “There’s lots of money wasted, and Doug is going to stop the gravy train,” he says, repeating a favourite line among Ford supporters. “I think he’ll bring businesses back to Ontario. He’s a genuine guy. He’s always supporting the poor people in the province. He’s fighting for the little guy.”

Graves describes populism in Canada as a political orphan. “There’s really nobody out there speaking the language and the style that a lot of these people want to hear,” he says. “That’s why Doug Ford becomes such an interesting character. Although he’s not a perfect fit, he is by far the closest thing to a populist leader.”

Ford speaks in breezy anecdotes and snappy sound bites that are uncomplicated by details or nuance. “My cap and trade policy is very simple: I’m gonna cap taxes and trade Kathleen Wynne,” Ford proclaimed at the last leadership debate in Ottawa. He will cut taxes, for the rich and poor, and somehow bolster public health care and housing. Never mind how it will happen, just trust that it will—and people do.

“A politician like Doug Ford appeals to people with partisan brains who basically want someone to tell them what they want to hear,” says Filion. “He’s very appealing to that one third of the population who says, ‘that guy sees things in the same simple terms I do, and tells it like it is.’”

But getting to 50 per cent rests on another set of factors, says Filion: masses of people need to be fed up with the status quo (check), and you need the perfect foil. “That could happen in Ontario because a lot of people seem disillusioned with Kathleen Wynne,” he says. Graves’ poll showing 25 per cent of Canadians on the populist fence supports the notion that, theoretically, the province could vote in Ford’s favour if he wins the PC leadership on March 10.

Still, many conservatives think a Ford win is unlikely. Just four days before the leadership announcement, Ford sent an email to members comparing himself to Mike Harris and Stephen Harper. “We need a leader who will stand on principle. Not someone who flip flops on core issues like carbon tax and sex ed,” the email reads. “As leader, I will stand on principle and win. Just like Mike Harris. Just like Stephen Harper.”

Party member and political strategy consultant Jeff Bangs interprets the email as an appeal to more traditional conservatives. “He’s trying to put himself on even plane with [Harris and Harper],” says Bangs. “But he’s not. Nor does he have the skills to bring people together like they did. The way Doug is operating his campaign is very divisive, and I don’t think the vast majority of this party is interested in the kind of polarization that he represents.”

It’s unclear whether Ford managed to attract enough new conservative members to outnumber traditionalists like Bangs. If he has, he stands a chance at victory. Indeed, populism is ideologically thin. It tends to bleed across party lines, as seen in the U.S. where large segments of Obama voters turned out for Trump in 2016. It’s also why habitual NDP voters, for instance, could support Ford if he winds up running for premier on June 7. “I wouldn’t underestimate Doug Ford’s ability to win the leadership,” says Filion, “and if he wins the leadership, to get elected premier.”