Is Doug Ford's position on cannabis sales an opportunity for the NDP? 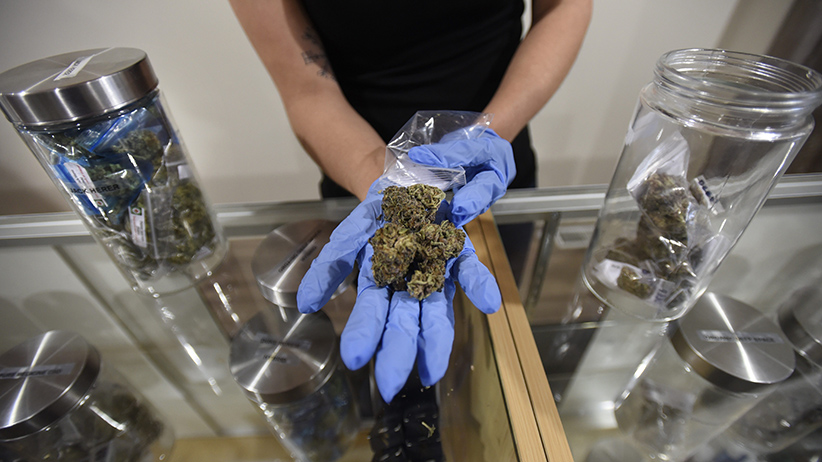 Legalizing pot was among Justin Trudeau’s most memorable promises in his run for Prime Minister. The pledge attracted droves of supporters fed up with restrictions against a substance which, by many accounts, is far less harmful than alcohol. It may even have lured in some folks who bought into his rhetoric that legalizing weed would “remove the criminal element” linked to cannabis.

Now that they’ve received the legislative baton from Ottawa, it’s up to the provinces to detail how marijuana distribution and sales will roll out in their jurisdictions. Some, including Alberta, Saskatchewan and Manitoba, have agreed to allow private companies to sell cannabis. In Ontario, the Liberal government is taking another approach. Not only will it regulate pot, it will distribute and sell it through its crown corporation, the LCBO.

The plan is woefully unpopular among a vocal group of cannabis proponents and Kathleen Wynne naysayers. Some worry strict regulations will quash the indie entrepreneurial spirit of the dispensary model, which now operates illegally in many Canadian cities. They fear “Big Cannabis” and say it’s not fair for the government to box out public players and reap all the benefits themselves. Some argue the restrictive model won’t meet consumer demand, nor will it snuff out the black market. They call Ontario’s weed regulations “fake legalization.” Some are simply sick and tired of what they see as the government over-regulating everything.

“I don’t need the government to save me from my own decisions,” says Abi Roach (her public, not real, last name), who contests the current distribution plan for all the aforementioned reasons. Roach is a director for the Cannabis Friendly Business Association and volunteers for Sensible Ontario, a marijuana interest group that lobbies for private marijuana sales, among other things.

So when Doug Ford took to the airwaves this week suggesting he’d liberalize weed and alcohol distribution and sales, a mass of undecided voters leaned in towards him, tilting the electorate subtly to the right. (Ford has since softened his language on the subject, saying “we got to be super, super, super careful” in regulating the cannabis market.) “I’ve heard it a million times,” says Roach, referring to Ontarians, motivated by private pot and alcohol sales, pledging to vote Conservative for the first time in the next election.

Kate Robertson has heard it, too, but she’s not convinced voters will follow through. “Right now we’re seeing cannabis activists who would generally be advocating from the left, using this right-wing ideology to try to gain political support for their cause leading up to this election,” says Robertson, a content editor at Lift, an online cannabis marketplace. In other words, public support for Ford’s cannabis platform may be more political tactic than genuine interest in voting for him: proponents of private sales hope other parties will feel pressured by the popularity of his position and change their own platforms.

Polls suggest Ontarians are split on whether they want a public or private business model for weed distribution. In a Nanos survey from July 2017 32 per cent of respondents said they support having marijuana sold by “licensed and regulated private retailers instead of the LCBO” once it’s legalized, and 31 per cent oppose the private model. Meanwhile, six per cent are undecided, 23 per cent “somewhat support” a private model and nine per cent “somewhat oppose” privatization. The third of people with no strong feelings on the matter, or who are undecided, are not likely to be swayed by Ford’s free-market position.

Even Roach, a staunch marijuana activist and political leftist, isn’t swayed by Ford just yet. “I’m glad he got the conversation going, but I don’t know if he changed my mind,” she says. “He’s conflicting because people who would usually vote NDP and would support the left are now looking at Ford,” she continues, “but on other things he’s saying, [voters on the left] are not in agreement. I need to hear the rest of his platform.”

With many marijuana advocates having long ago lost confidence that the Liberals will represent their interest, Roach and Robertson agree that Ford’s comments on privatization are, more than anything, an opportunity for the NDP. To date, the Ontario New Democrats have been virtually silent on the province’s marijuana game plan, which could change entering campaign season. “I’m hoping that the NDP comes out with their platform and we make this an election issue,” says Roach.

Either way, Robertson argues that the issue of marijuana distribution isn’t going to lure voters to the ballot boxes like legalization did in the last federal election. “I think legalizing something is very different from regulating how it’s distributed,” she says. “I just don’t think the distribution piece is as hot.”