Is it too soon to play Ontario coalition game theory? It's never too soon!

Paul Wells: Will there be a 'backroom deal' between the Ontario Liberals and NDP? Why it's so tempting—and misguided—to speculate. 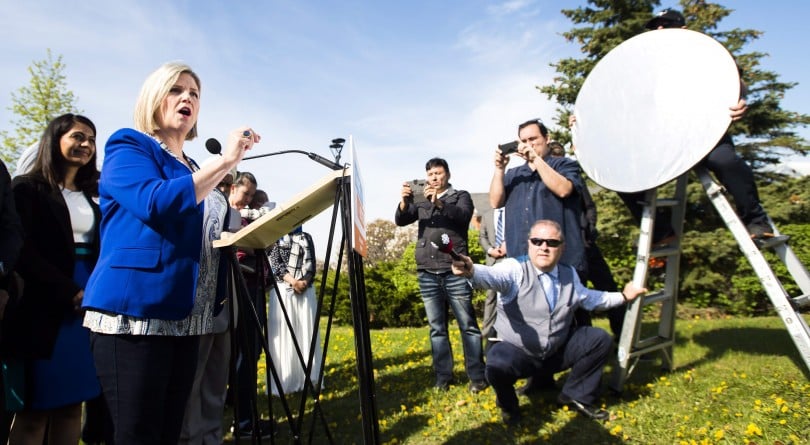 Andrea Horwath, the Ontario NDP leader, was standing in front of a hospital in Brampton this morning talking about health care. Or rather, she’d have preferred to talk about health care. But many of the questions coming from reporters had to do with whether she’s cooking a deal to share power with Kathleen Wynne, the incumbent Liberal premier, after the province’s June 7 election.

Doug Ford, the Conservative front-runner, set the day rolling with this tweet, which his campaign staff was quick to share with reporters for emphasis:

The people of Ontario want change, not some backroom deal by the NDP to keep the Liberals in power. #onpoli #ONelxn

Where does this talk of a backroom deal come from? From a weekend Canadian Press story in which Wynne and Horwath simply declined to speculate about post-election seat-count scenarios. The Star headline on the CP story paraphrased them saying it’s “too early to talk about possible coalition.”

Here’s the Wynne quote: “We’re in Day 5 of the (30-day) campaign. I’m not going to pre-empt the result of the election.”

And the Horwath quote: “We’re going to wait until June 7 before we make any decisions.”

Well, that’s all a lot of Certified Political Professionals™ needed to bemoan the two leaders’ inability to shut the story down. On Monday, Horwath came armed with heavier lines. “We have no interest in a coalition government with the Liberals,” she said. Sure, after June 7 she’ll “look at the task Ontarians give us, and work with that task.” But “I am unequivocally saying I have no interest in partnering up with that party”—the Liberals.

This was, of course, catnip to the scribes, who had many followup questions. Having “no interest” leaves open the possibility that an interest could later be formed. Refusing to “partner up” leaves open the possibility of a looser arrangement—a confidence pact, of the sort the Liberals and NDP formed in Ontario in 1985, or the deal with the Greens that’s keeping the NDP government in British Columbia afloat.

We could play these parsing games all day. Those of us who covered the federal election in 2011 have had plenty of practice. That election was all about Conservative-stoked fear of resurrecting the December 2008 coalition pact among Stéphane Dion’s Liberals, Jack Layton’s NDP and (in a confidence-pact sidecar arrangement) the Bloc Québécois.

I hate this sort of talk, for three reasons. First, speculating about how the legislature might compose itself after an election is pure speculation. There’s no evidence on which to base any claim you might make about how many seats each party will have. This makes it irresistible for some political observers, of course, because no prediction can be proven wrong. But it’s a pure waste of time.

Second, game-theory speculation about things that haven’t happened yet, and probably never will, is an excellent way to distract from discussion of parties’ proposals and plans for actually governing. So it’s empty calories. (HEY, MR. PUNDIT, WHY ARE YOU WRITING ABOUT THIS SPECULATION IF YOU SAY THIS SPECULATION IS EMPTY CALORIES? Because we seem to be in for it anyway, and in the meantime, there’s lots of excellent coverage of real issues elsewhere on this internet web site right here.)

Third, these questions tend to force leaders to rule out scenarios they may actually need to contemplate, depending on the election returns. We saw this in the 2008 federal election, in which Stéphane Dion spent the home stretch of the campaign denying any interest in working with the NDP. The NDP were fiscal reprobates, they didn’t understand math, and so on, Dion kept saying. Then he held a news conference to celebrate a coalition pact with the NDP. Now, there were a lot of problems with that coalition pact—long story short, it richly deserved to collapse quickly, as it did—but the bigger problem wasn’t the pact, it was Dion’s willingness to go along with all the Smart Advice telling him he mustn’t entertain any notion of power-sharing.

I get the strategic calculations—if you say you might work with other parties, it makes all your claims about their moral and intellectual failings ring hollow. But the intellectually honest answer would be: “We are campaigning for every seat in the province. After the election we will keep working for progress in any way that makes sense.”

Concretely, your best primer for what might happen in Ontario is, ahem, the one I wrote in the immediate aftermath of last year’s B.C. election. It makes a simple point: The parties are not on an equal footing after the election. There will still be a government—it’s the one Ontarians had before the election, composed of Liberals and led by Kathleen Wynne. That government will have the right to test its support in the legislature. It would have that right regardless of the number of seats it wins. In practice, no incumbent government bothers to test the legislature if it is clear it could not win a confidence vote—that is to say, if it’s outnumbered by other parties.

If it’s clear Wynne’s Liberals don’t have enough seats to govern, one of the other parties will get to try. If that party has a majority, these things will all be automatic. If no party does, it’ll generally be obvious which one gets to try: the one with the largest number of seats. If it’s close, various parties may try novel combinations, as happened in B.C. It’s worth remembering that in B.C., the Greens had the option of working with the incumbent Liberals—the math would even have been a little more comfortable—but they couldn’t justify propping up an unpopular incumbent Liberal government for any longer.

That may well have turned out to be foreshadowing. We’ll find out. In the meantime, it’s mostly better to talk about which kind of government Ontarians want, rather than trying to guess which kind they might be stuck with.