Is Mike Duffy eligible to represent PEI in the Senate?

A question that still lingers over the Duffy affair 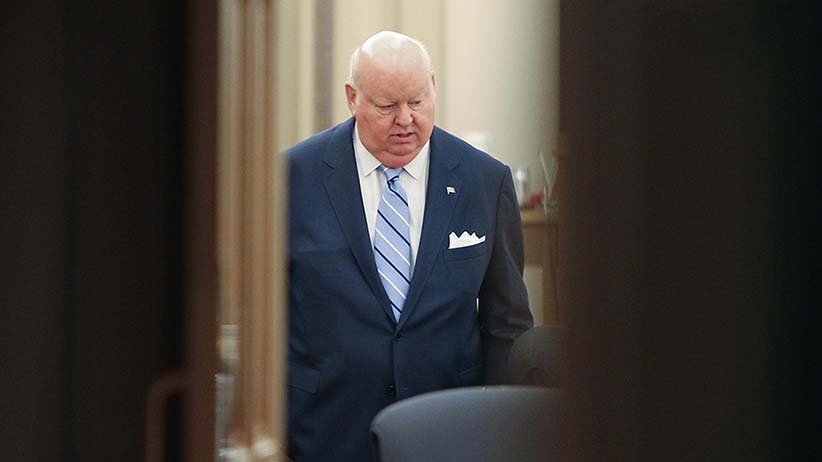 On Dec. 22, 2008, Prime Minister Stephen Harper, having just barely avoided losing his government, announced his nomination of Mike Duffy to represent Prince Edward Island in the Senate. Two days later, the Guardian in Charlottetown reported the opinion of David Bulger, a law professor at the University of Prince Edward Island, that Duffy wasn’t eligible to fill the P.E.I. seat he would soon occupy.

Six and a half years have since passed and Duffy, though suspended from the upper chamber, remains one of Prince Edward Island’s three senators*. And yet whether he is eligible to be a senator for the province remains a live question. Crown attorney Mark Holmes told the court yesterday that Duffy was “probably ineligible” to represent P.E.I. and today’s proceedings included some haggling over how to define a senator’s residence.

The location of Duffy’s “primary” residence is likely relevant to determining whether he should have claimed certain expenses, but there is still that larger question here: Is Mike Duffy eligible to represent P.E.I. in the Senate?

That is even more than a debatable matter of constitutional law; by Duffy’s telling it is an important part of what went down between himself and the Prime Minister’s Office.

The story here is long and intriguing.

What the Constitution Act says and what that means

At issue is Section 23 of the Constitution Act, which sets out the qualifications for appointment as a senator—specifically part five which states that, “He shall be resident in the Province for which he is appointed.”

What does that mean? How should “resident” be defined?

Professor Bulger’s view was that, as of December 2008, Duffy did not qualify as a resident of Prince Edward Island. “What it comes down to is—does he have to be a resident in the province at the time when he’s appointed? Some of us, and I am one of them, would argue yes,” he told the Guardian.

Duffy was born and raised in Prince Edward Island, but he had lived and worked in the Ottawa area as a journalist for many years before his appointment to the Senate. (Duffy did own a cottage in P.E.I., which satisfied the Constitution Act’s requirement of property in the province a senator represents.)

On the same day of the Guardian‘s report in 2008, the Prime Minister’s Office told the CBC that Duffy would become a resident of P.E.I. and file his taxes there. But five years later, in 2013, the Guardian reported that, so far as his property taxes were concerned, P.E.I. considered Duffy a non-resident because he spent less than 183 days there. CTV also reported that Duffy was not on the province’s voters list for 2011. The Globe reported that Duffy had continued to use an Ontario health card. But as the Senate investigated residency claims, Duffy asked the office of P.E.I.’s health minister to expedite the issuing of a provincial health card.

It was in December 2012 that the Citizen reported that Duffy was claiming a housing allowance for his residence in Ottawa: the story that set the entire Duffy-Wright affair in motion. And a few weeks after the revelations about his non-resident status, the voter’s list and his health card, Duffy announced that he would repay the expense claims that were in question. Two months after that, CTV reported that Nigel Wright had covered Duffy’s debts.

When Duffy made the second of his two speeches to the Senate in the fall of 2013, he tabled a series of documents, including a memo sent to Duffy in January 2009 by an adviser to Sen. Marjory LeBreton (LeBreton was government leader in the Senate at the time). LeBreton’s adviser, Christopher McCreery, explained that it was for the Senate to judge the qualifications of its members, that there was no official definition of residency within the Senate’s rules, that the ownership of property is sufficient to substantiate residency, and that a senator’s declaration of residency was essentially “sufficient proof” of residency so long as senators are taken at their word. LeBreton made similar comments in February 2013 when asked about Duffy’s eligibility: “There is no doubt that senators that sit in the Senate, by way of the declaration of qualification, qualify to sit in the Senate.”

So far as the legal question of whether Duffy was qualified to sit in the Senate as a representative of P.E.I. there might be something to McCreery’s argument. Look at it this way: it is for the Senate to determine the eligibility of its members and unless or until the Senate decides to define the residency qualification or rules Duffy somehow ineligible, he remains eligible.

What Mike Duffy says and what happened within the PMO

But wait, as Duffy himself might say, there’s more.

When Duffy spoke in the Senate on Oct. 22, 2013, he alleged that he had been threatened with expulsion, seemingly on the grounds of residency, if he did not go along with the PMO’s scheme to repay his expense claims. Sen.r David Tkachuk immediately denied that he made any threat or was part of any conspiracy. Sen. LeBreton later denied knowledge of a plan to have her whip the caucus.

In the RCMP’s court filing in November 2013, there were some details of the back-and-forth between Duffy and Wright and this issue of eligibility does seem to have been a point of concern.

RCMP Cpl. Gregory Horton explains that, in an interview, Nigel Wright said Duffy was worried about being declared ineligible, but that Wright was of the opinion that Duffy met the constitutional requirements (pages 12 and 14). At page 26, Wright worries that a new proposed definition of residency would render Duffy ineligible. At page 27, a PMO official tells the Prime Minister that the PMO is working to resolve the residency question and Wright emails other officials to say that “we” will defeat any challenge to Duffy’s eligibility on the issue of residency. (Wright also conveys the Prime Minister’s opinion that the ownership of property equates to residency.)

At page 29, Duffy emails his own lawyer to say that Wright said senators Tkachuk and Carolyn Stewart Olsen, members of a three-person steering committee within the Senate, were preparing to vote that Duffy was ineligible; Duffy describes this as an implicit threat. At page 31, Duffy’s lawyer demands that, if Duffy repays the money, the PMO provide written acknowledgement that Duffy met the residency qualification. At page 32, Wright writes to other PMO officials that there will be no written acknowledgement, but that a “senior government source” will confirm Duffy’s eligibility and the Prime Minister will do the same if asked. “That is because it is true,” Wright says.

At page 40, Duffy’s lawyer writes to the PMO’s legal counsel to say that Duffy wants an assurance that LeBreton will urge the Conservative caucus in the Senate to vote against any motion seeking his “removal.” At page 42, LeBreton emails Wright to say she will double her efforts to make sure there is “no reference to the legitimacy of Senate seats” in a Senate committee’s reports. At page 56, Tkachuk commits to helping fend off any “attacks on residency.” And at page 58, an adviser to LeBreton named Christopher Montgomery is said to have told the RCMP that an official from the PMO suggested that a meeting of a Senate committee be called to declare Duffy and Pamela Wallin residents of the provinces they represented.

Finally, at page 66, Cpl. Horton parses Duffy’s first speech to the Senate in October 22. Horton says he has “seen no evidence to date” to support Duffy’s account of a threat of expulsion. “I believe that the emails show that Nigel Wright was committed to ensuring that the constitutionality of Sen. Duffy’s Senate seat not be an issue,” Horton writes at page 68.

Of Duffy’s second speech, Horton writes that “I have not seen evidence of threats and intimidation as alleged by Sen. Duffy”.

(In his opening statement to the court, Duffy’s lawyer referred to the senator as an “extorted person.”)

There is one other lingering mystery here.

The Senate’s internal economy committee apparently sought a legal opinion on the question of residency. That much was reported in 2013. In August of that year, it was said that that legal opinion might be received by September. But to date, at least to my knowledge, no such legal opinion has ever been released.

Imagine, if you will, that Stephen Harper had appointed Mike Duffy to represent Ontario, instead of P.E.I. That would, in the first place, have meant no question about his eligibility. It might also have preempted all that has ensued.

*Prince Edward Island is, by the constitution, entitled to four senators, but Stephen Harper has stopped making appointments to the Senate. Seemingly because his appointees were causing him such trouble.