Is the Republican party about to implode?

As Donald Trump makes more enemies inside his own party, a Republican civil war seems inevitable 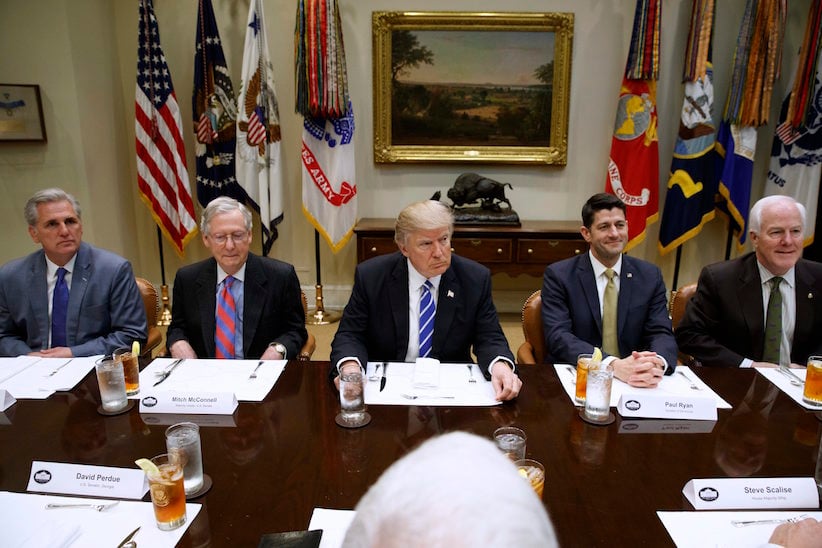 This should be the Republican party’s moment of triumph. Against the expectations of every pollster in America, their man was elected president. Making it even sweeter, he did it by defeating the GOP’s greatest nemeses, the Clintons. The party now controls the White House and both houses of Congress. This is only the second time in 60 years that their stars have aligned like this.

It gets even better. The new president will be appointing the next Supreme Court justice and possibly as many as three more over his term, stacking the court for a generation. At the state level, almost two-thirds of the legislatures are now controlled by Republicans—one more and they will have the supermajority needed for constitutional amendments. And, the new president is inheriting one of the strongest economies in decades, with a sky-high stock market and record job growth. According to an analysis by RealClearPolitics, this is the strongest the Republican party has been in 80 years.

But the fruits of victory have turned to ashes in their mouths. The political talk shows are filled with conservative pundits criticizing congressional leadership. Congressmen are calling for special investigations of the president. The president is accusing his staff of maliciously leaking “fake news.” His staff are attacking all and sundry and down the hall, cabinet members are directly contradicting presidential edicts on everything from trade to defence. The GOP victory has turned into a self-immolation.

The stage for this was probably set during the bloodiest primary race in memory. The endless series of debates looked and sounded like barroom brawls. Standing on a table in the middle of the mayhem was the czar of chaos himself, Donald Trump, yelling insults at every Republican in earshot. No target was off limits, from Ted Cruz’s wife, to John McCain’s patriotism, to Chris Christie’s dignity.

When Trump finally emerged as the official nominee, the party establishment (almost all of whom had called him a lying fraud and a dangerous fool at some point) painfully swallowed their pride and endorsed him. Trump rewarded them with ritualized humiliations. He forced Mitt Romney to smile and choke down frogs’ legs while the press recorded the kowtowing. Christie was made to dance for increasingly smaller offers, before finally being told to go home and get his shine box. By the time the GOP team gathered on the inaugural stage, they were already bruised and battered and demoralized.

Even a gifted leader would have had a hard time rebuilding the team at that point. Trump didn’t even try. He staffed the White House with outsiders, people who not only owed nothing to the GOP, but actively derided it, such as Stephen Bannon, Kellyanne Conway and Stephen Miller. And the party’s only foothold in the Oval Office, former GOP chair Reince Priebus, becomes increasingly tenuous as he is undermined daily by leaks and accusations.

Meanwhile the new president has thrown one policy grenade after another at his erstwhile colleagues. Almost every initiative—the Muslim ban, the border wall, the trade protectionism and now Trumpcare—has forced at least some Republican politicians to publicly repudiate him. Even his own cabinet appointees have pushed back in remarkable ways—directly contradicting the president on issues like NATO. After only 54 days in office, the Trump presidency already looks poised to unravel into a Republican civil war.

What is missing is a rival leader. So far, no senior Republican has been willing to openly challenge the president. While men like Senators John McCain or Lindsey Graham are stepping up, particularly on Trump’s murky Russian links, neither is attracting a following. Nonetheless, the Senate is the most likely place for open rebellion to break out. The Republican seats are safe there, unlike the “Freedom Caucus” congressmen in more marginal districts. Their fortunes are more closely tied to Trump’s, and they will keep their heads down as long as possible.

But their time may be running out. Trump’s approval ratings started at record lows, and are going lower. The House Intelligence Committee launches its Russia investigation on Monday. The Senate will follow with its own soon after. And the Trumpcare fiasco is just getting going.

When you step back and look at the full picture, the possibility of the Republican party descending into a full-blown civil war seems almost inevitable: the president has spent years making enemies inside the party; many of his policies are anathema to his caucus; and their agenda is being jeopardized by his misbehaviour and missteps; the party’s mid-term prospects are being hurt by Trump’s own falling ratings; and the growing extremism of his followers is alienating more traditional Republicans. Right now the party is commanding the heights, but a fall may be imminent, and it may be spectacular.