Is the Speaker responsible for Parliament?

Sort of. But he shares that with 307 other MPs 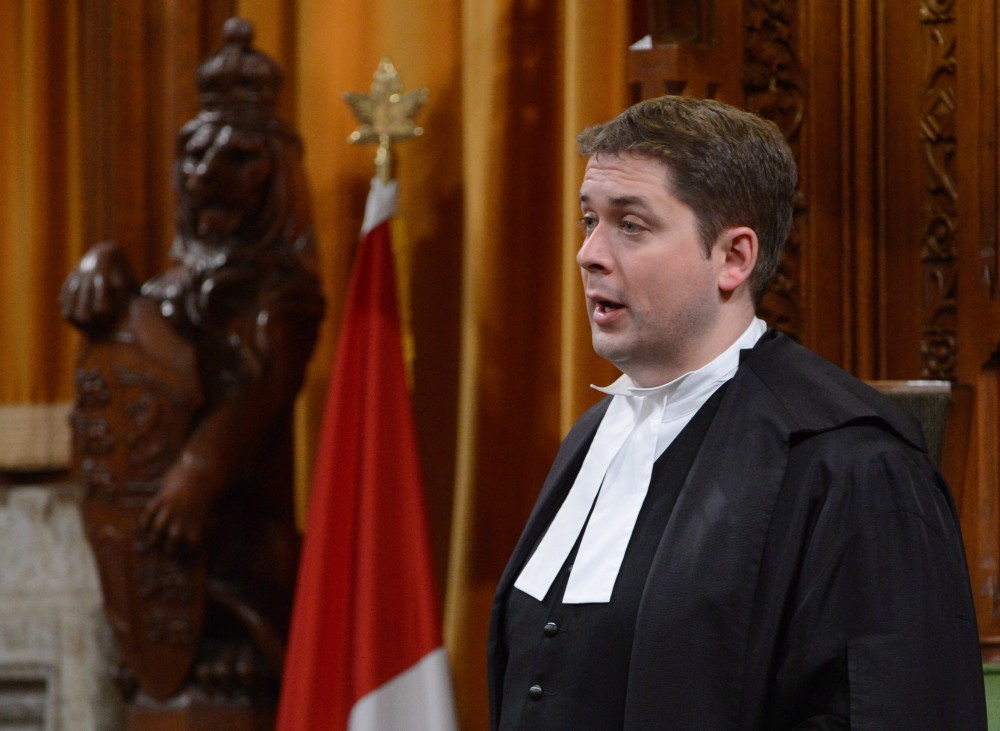 Speaker Andrew Scheer’s statement yesterday on question period can be read in full here. The `‘s Paul McLeod is unpersuaded and thinks Scheer should either impose himself on the situation or remove himself from the situation.

Being a bit of an equivocator, I’m sympathetic to both the Speaker and his detractors (on my grumpier days I’m among those detractors).

There’s a very decent case to be made that the other 307 MPs in the House of Commons should take responsibility for themselves and the functioning of the place. The Speaker is not a kindergarten teacher. Our members of Parliament are (in theory) adults and we should be able to expect that they will approach elected office and the chamber they occupy with all the humility, responsibility and reverence that is due. If question period has been reduced to farce (or if it is simply too farcical), then MPs should be responsible for addressing that: either through changing their behaviour or changing the rules or explicitly empowering the Speaker to better control everyone.

Beyond that, there could be some onus put on the public. That’s somewhat complicated: it’s overly simplistic to imagine that voters should make “behaviour in question period and general respect for Parliament” to be their primary consideration when deciding who to vote for at the next election. But public cynicism and disinterest only make it easier for those who would disrespect our institutions to do so. Maybe if there were regularly several thousand people on the front lawn demanding a better Parliament, MPs would be less inclined to neglect their responsibilities in that regard.

What precisely can we expect from the Speaker?

The official guide to practice and procedure is fairly light in its demands on this point.

As it pertains to replies to oral questions, “There are no explicit rules which govern the form or content of replies to oral questions. According to practice, replies are to be as brief as possible, to deal with the subject matter raised and to be phrased in language that does not provoke disorder in the House. As Speaker Jerome summarized in his 1975 statement on question period, several types of responses may be appropriate. Ministers may: answer the question; defer their answer; take the question as notice; make a short explanation as to why they cannot furnish an answer at that time; or say nothing.”

They may do that. Not must.

On the other hand, “It is the prerogative of the government to designate which Minister responds to which question, and the Speaker has no authority to compel a particular Minister to respond.”

And, “Members may not insist on an answer nor may a Member insist that a specific Minister respond to his or her question. A Minister’s refusal to answer a question may not be questioned or treated as the subject of a point of order or question of privilege.”

And while “the Speaker ensures that replies adhere to the dictates of order, decorum and parliamentary language,” he “is not responsible for the quality or content of replies to questions.”

In other words, if Paul Calandra, in responding to the leader of the Opposition on Tuesday, had referred to Tom Mulcair as a blatherskite, the Speaker likely would have been compelled to interject. But since Paul Calandra was merely talking about something that had nothing to do with the serious and straightforward question asked, the Speaker declined to get involved.

Is that a silly way to do things?

We might expect that behaviour such as Calandra’s would be so poorly regarded by the public that a minister or parliamentary secretary would be loathe to behave so flagrantly. Maybe somewhere deep in the recesses of the Prime Minister’s Office there is someone feeling slightly chastened by the reaction to this week’s display and so at least until the memory fades there will be some feeling that flipping off the opposition is not advisable.

If the Speaker wanted to interject, I think he could find an excuse.

Standing Order 11(2) states that, “The Speaker or the Chair of Committees of the Whole, after having called the attention of the House, or of the Committee, to the conduct of a Member who persists in irrelevance, or repetition, may direct the Member to discontinue his or her speech, and if then the Member still continues to speak, the Speaker shall name the Member or, if in Committee of the Whole, the Chair shall report the Member to the House.” (emphasis mine)

Scheer’s argument is that this rule applies only to the time reserved for debate in the House. And if you refer to your copy of the Annotated Standing Orders you will see that the rule dates to 1910 and that it is referenced only in the context of debate.

But if a Speaker wanted to impose himself, I imagine he could point to this rule and declare that from here on those who insist on responding to questions with comments on unrelated matters would be cut off and the House would move on to the next issue. I’ve argued that Scheer could do this and there are at least a couple of examples of the British Speaker doing this (to the Prime Minister no less).

Now, would Calandra have objected to being cut off? Maybe. Would he have argued that his comments were relevant somehow to the question? Probably. (In fact, he has argued that in interviews.)

This is where things could get tricky. How do we want to define “relevance”? How strictly do we want this rule enforced?

I think, in the abstract, you could write a very precise rule that a Speaker could see fit to apply, keeping in mind that members might disagree with its application and that there would be continued debate about how it was being applied. All of which may or may not turn out to accomplish much.

I wouldn’t mind a more interventionist Speaker. I think Scheer could be much stricter about cutting off questions from the governing party that are really only attacks on the opposition with a question mark duct-taped to the end. (A simple rule proposal: Any reference to the opposition gets a question cut off. The Conservatives would whine about such a restriction, but question period doesn’t exist for any purpose except to hold the government to account. If Conservatives want to see that time used to keep the Liberals or NDP to account, they can go ahead and concede the next election.) I think the Speaker could make more effort to cut off statements by members—delivered in the 15 minutes just before question period each day—that are nothing more than attack ads. Of course, MPs might object and might try to get around whatever rules he applied. But it’d at least be interesting to see a long drawn-out fight over such stuff. The Speaker, even an aggressive one, can only do what the House will allow him. He serves at the pleasure of Parliament and can be removed by a vote. But a persistent Speaker removed or defied for being too aggressive might easily win the public’s sympathy and put his critics on the defensive.

That though requires a certain philosophical willingness to see the role that way.

It seems to me, more generally, that Speaker John Bercow in the United Kingdom—here is his speech on seeking the chair, here is a speech he gave on parliamentary reform—has been a prominent voice in the reform discussion. That, I think, is probably within the bounds of the job. Bercow’s comments in this speech about his efforts to “to test the elasticity of the office” are worth considering. (I won’t claim here to be thoroughly schooled in Bercow’s tenure. My impressions are anecdotal.)

It’s important though to not get lost into a debate about how the Speaker should be.

In a post this morning, the blogger Radical Centrist offered a very nuanced review of the institution of question period, how it compares to the situation in Britain and how it might be both understood and better managed. Those are structural issues.

Beyond that, there is culture and behaviour. The Speaker is important, but there is one of him and there are dozens of backbenchers on each side of the House. I might rather start by asking each of those MPs what precisely it is that they think they’re supposed to be doing here and why Parliament isn’t better than it is. That’s on them.