It's decision time in Alberta 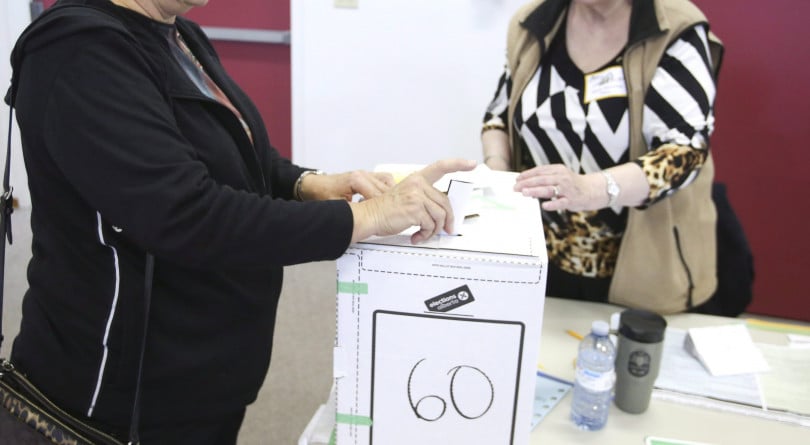 A voter casts her ballot in the 2015 provincial election in Olds, Alta.; this time around, nearly 700,000 voters cast advance ballots (Mike Ridewood/CP)

A note to subscribers: Alberta Politics Insider will come out Tuesday morning, have a full recap Wednesday and a final review and lookahead newsletter Thursday. After that, subscribers will receive Maclean’s Politics Insider, our year-round tip sheet from Ottawa and beyond.

Happy voting day, if you aren’t one of the 696,000 Albertans to have already cast ballots. Polls are open from 9 a.m. to 8 p.m. Figure out where to vote here. If you are not on the list or have moved recently, find out about ID requirements.

What if we’ve gotten it all wrong, again?

This is the fifth Alberta election I have covered since moving here. (If I tell you I’m originally from Ontario, will that make you stop reading?) In 2004, it was overwhelmingly clear where things were headed, and indeed Ralph Klein’s fourth Progressive Conservative majority was smaller than his third. In every election since, I’ve watched preconceived media/public notions about what would happen go up in flames.

Perception: Premier Ed Stelmach is a shaky newcomer; polls show a large undecided vote; Calgary and Edmonton have swelled with new Alberta residents with no roots in the old Tory ways. “Panic has crept into Conservative ranks,” Don Martin wrote in the National Post. Tories will lose a bunch of seats, and in nightmare scenario become a minority government.

Reality: Stelmach boosted the Tory majority to 72 seats, 10 more than ol’ King Ralph. The Liberals’ caucus was halved, as was the NDP (a newcomer named Rachel Notley won her seat, however), and the right-wing Wildrose Alliance lost its only seat. The undecided vote broke as the polls did—mainly toward the PCs.

Lesson: Don’t get too excited about the uncertainty of undecided voters.

Perception: Voters are finally tired of the Tories after nearly 41 years in power, and furious about MLAs getting thousands in pay for a committee that never meets. Wildrose leader Danielle Smith seems more popular than Premier Alison Redford. Wildrose candidates have been caught saying appalling things, and Smith questions climate science, but the polls show the Wildrose leading by eight points or more. The PC dynasty is dead.

Reality: The PC dynasty lives! Redford wins 61 of 87 seats; Smith’s party sweeps the rural south and wins 17; the NDP doubles its caucus with four seats, still in fourth place. Voters either changed their minds at the last minute, or polls were disastrously wrong. Albertans weren’t so keen on change as people thought.

Perception: Okay, now voters seem tired of the Tories after nearly 44 years. Premier Jim Prentice’s tax-hiking, program-trimming budget was almost as ill-advised as his exhortation that Albertans should “look in the mirror” or the floor-crossing of most Wildrose MLAs. And leading in the polls is… Notley’s NDP? Really? Everyone was suckered into the change narrative last time, and it’s hard to have faith in it like in 2012.

Lesson: Trust the Alberta polls, mostly. Most surveys slightly overestimated NDP support, and underestimated the Tories’ popular staying power, even if they lost most of their seats.

Perception: The Alberta NDP is one term and done. Jason Kenney’s right-wing party has ended vote splits in Calgary and will win a tidy majority, thanks to deep economic malaise and frustration about the lack of federal progress on pipelines. He spent the whole campaign dogged by bigotry and social conservatism in UCP ranks, and shenanigans in the party leadership race, but “it’s the economy, stupid” stubbornly dominates the narrative arc. Polls have shown a narrower lead, and most analysts predict a healthy majority, but not a supermajority of 70 seats or more like Stelmach won.

Reality: We’ll find out! If it’s close, and many ridings come down to remote “vote anywhere” ballots that won’t be counted until Wednesday, we might not find out Tuesday.

Lesson: To be revealed in a forthcoming Maclean’s newsletter!

Ridings to watch, and what they’ll mean

Lethbridge–West: The UCP fancies no better rebuke of the carbon tax than the ouster of Environment Minister Shannon Phillips. She won with 59 per cent of the vote last time. Some Conservatives feel this is a tight race, but a tough one. If NDP lose here: They likely won’t win any seats outside of Calgary or the Edmonton region.

Calgary–Mountain View: The lone incumbent seat for the once-relevant Alberta Liberals. MLA David Swann left after four terms, and Leader David Khan is running in this inner-city race. Justice Minister Kathleen Ganley is running for the NDP, and pastor Jeremy Wong is the UCP fill-in candidate after the previous hopeful stepped down after being accused of showing white supremacist leanings in private Facebook chats. If the Liberals lose: They’re extinct in provincial politics, and the Alberta Party inherits the political centre. If the UCP wins: They’ll have an excellent night thanks largely to vote-splitting among NDP, Liberals and Alberta Party. United conservatives, divided everyone else.

Edmonton–Meadows: Kenney appointed Len Rhodes, the former Edmonton Eskimos president, to run in this southeast Edmonton riding, infuriating supporters of contestants for the party’s nomination. Few UCPers figure there’s a shot here now, if there ever was. If UCP wins: They’ve eaten heavily into the NDP’s capital-city fortress, and will secure a supermajority of 70 seats or more.

Leduc–Beaumont: Among the seven NDP-held seats that circle Edmonton, party advisers have high hopes for Municipal Affairs Minister Shaye Anderson, a well-liked local rep with blue-collar cred. But the UCP might just be too popular with the blue-collar masses in this riding. If the NDP wins: It’s a fairly good night for Notley’s team throughout the capital region, and she’ll have a sizeable caucus.

Calgary–Elbow: The lone seat Alberta Party won last time, and former leader Greg Clark is running again against lawyer Doug Schweitzer, a UCP cabinet shoo-in (if he wins). The NDP gave Clark the run of this old-money central Calgary riding in 2015, notching 16 per cent—their worst performance in the city. This time, they’re running hard with candidate Janet Eremenko. But Clark is likely to peel off votes from left and right. If the Alberta Party loses: They’ve probably lost everywhere.

Calgary–Acadia: This happens to be my home riding. But it’s also a key bellwether. NDPers are doubtful of their chances south of Calgary’s Glenmore Trail, where they won four urban seats in 2015. It will likely be one of many UCP pickups, but… If the NDP wins: Keep the bubbly on ice—Notley may stay on as premier.

Janet French on the 223,000 remote advance ballots that will be counted after election day: “In some ridings, like Calgary-Foothills, Calgary-North and Edmonton-South West, a substantial proportion of votes will remain unopened Tuesday. ‘It will probably cause chaos on election night broadcasts,’ said Duane Bratt, a political scientist at Calgary’s Mount Royal University. Some of the ridings with thousands of advanced votes to remain uncounted on election night are among the tightest races in the province, Bratt said.” (Edmonton Journal)

Alberta Party platform: “A party for all of us”