Jagmeet Singh and the case for second chances

Our political parties are becoming magpies, dumping leaders for the next shiny thing. But look what happens when they don't. 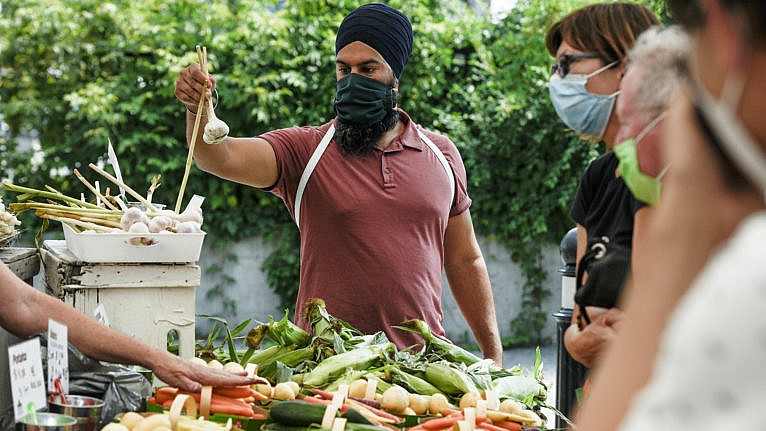 Singh on a walkaround at the Parkdale Public Market in Ottawa. (Justin Tang/CP)

It ought to be noted by somebody that NDP leader Jagmeet Singh is going into this stupid, cynical, unnecessary federal election that nobody actually wants looking pretty damn strong.

The polls have remained remarkably static, but what glimmers of insight that can be gained suggest an NDP that has maintained an improving hold on public opinion. Singh’s personal popularity is strong, and no wonder. He enjoys the luxury apportioned to all opposition politicians; he is able to fight for his electorate without ever having to account for the state of the ledger. He has none of Justin Trudeau’s baggage, and all the charisma and leadership experience denied Conservative leader Erin O’Toole.

While it seems most likely that indifferent voters will shrug their way into an apathetic Liberal majority, one certainly cannot rule out a 2011-style orange wave. Ten years ago, under the helm of Jack Layton, the NDP made historic gains to capture the role of Official Opposition. It’s an accomplishment the party has yet to match, but conditions have rarely been as ripe for a repeat.

And here I must pour a little iodine in the cut, just to watch the foam.

Former CPC leader Andrew Scheer made significant gains in the 2019 election, in fact winning more ballots than Trudeau. Yet in the face of perhaps too-high expectations, and a messy campaign for the Liberals, this was deemed insufficient to save the Conservative leader from the internal machinations of his own party.

Meanwhile, Singh barely treaded water in the last election, and despite whispers of disaffection the NDP maintained him at the helm.

Two years have passed, and which party now seems in better shape? No doubt, Scheer made mistakes—but so too has Singh. Only one got another chance to lead his party in an election, and the Conservatives would now trade a few miserly souls for Singh’s personal approval ratings. And what does that tell you? Perhaps shuffling a new leader off at the first sign of electoral wobbliness is not, actually, a great strategy.

The Conservatives are not unique, here. In recent decades, all Canadian parties have become infected with a kind of magpie compulsion, dropping and dragging new leaders into their twiggy little nests like discarded tinfoil balls doomed to tarnish in the rain.

Stephane Dion and Michael Ignatieff, remember them? Scheer, Thomas Mulcair, and now Green Party zombie Annamie Paul—all were duly dumped (or appear to be on the verge of being so) by parties that have lost all patience for the process of building a political brand. They’re all looking for the next shiny thing.

The implosion of the Green Party, and the coups against Paul is only the latest and most spectacular example of magpie politics in action. “No, I do not support Annamie Paul. She is killing the party,” said Jean-Charles Pelland, a candidate for Quebec representative on the party’s council, in a recent Toronto Star article.

Good lord, she just got there.

And if Conservative Party leader Erin O’Toole fails to deliver even Andrew Scheer’s results, how long will the party hold together around him? According to a recent Angus Reid poll, only a quarter of Canadians would rate O’Toole as a good or excellent Prime Minister, which puts him behind Trudeau and Singh.

I asked around some Conservative types to try to get a sense of why support for him seems to be so unenthusiastic, and all the answers I received were ephemeral; some were unhappy about the non-tax carbon tax his party recently proposed; they’re annoyed by his treatment of Derek Sloan, and feel that by casting him from the party, the leader alienated social conservatives.

Some simply believe that O’Toole’s unpopularity is a reflection of the deep disillusionment and anger that would be better directed toward Alberta premier Jason Kenney.

Frankly, none of these answers is satisfying. I have a hard time coming up with a feeling about O’Toole at all. He reminds me of the dad of a friend of a friend I once had in high school. That is, he doesn’t really remind me of anyone at all.

He’s a cipher. And of course he is; he was made leader of the party only a year ago. Creating name recognition takes time, years, and multiple election cycles and I suspect our parties are less willing to give their leaders any such opportunity to grow into the role.

Parties are treating their leaders like pump-and-dump penny stocks. Dear Leader is expected to perform, and to deliver results, with their success measured by whatever metric their membership values; power, influence, material resources, electoral advances, or simple moral chattel. Assessing a leader’s performance by these metrics, on these timelines, is as bloodless and shortsighted as reciting an earnings-before-taxes balance on a quarterly dividend statement.

Yet, the aforementioned orange wave didn’t just appear from the vapour. Layton led the NDP for eight years before his remarkable breakthrough. If he had not died shortly afterward, it’s not inconceivable that he could be Prime Minister today.

This tendency to always seek the next, new, shiny thing can only have been compounded by the electoral success of Justin Trudeau. Yet Trudeau enjoys an unrivalled advantage in his patronym, and within it an inherited political brand that had been constructed over the course of decades.

And that’s where magpie politics finds its inevitable endpoint. If we expect leaders to deliver “results” every 18 to 48 months in a zero-sum system, then there is no way for ordinary, service-minded people to build leadership competence or name recognition. Magpie politics is the result of an overly empowered party membership that can’t separate the corporate entity of its party from the cult of its leadership—and if that leader can’t win for a damn, or at least make them feel good about themselves in the process, well, then, the hunt for the next tinfoil ball begins. After all, the problem must lie with the leader, and not with the party itself.

This spares membership the trouble of advancing workable ideas, or feasible policy prescriptions. It’s just easier to cast about for a new personality, someone who can earn a few half-points in a personality contest.

The only kinds of politicians who can rise in that environment are the ones we tend to most disdain in politics. The ones who come into the game with pre-existing celebrity—a Carney, an O’Leary, a Trump. (Certainly, that celebrity may be acquired in the trenches of politics itself, but celebrity via the backbench doesn’t tend to favor measured or subtle individuals.)

The alternative is to recruit leaders from an established oligarchic or dynastic class, à la fils Trudeau.

Dynasties become endemic to democracies over time because they facilitate the creation of an enduring brand around a famous last name. The party can slot the next dauphin Trudeau, or Harper, or Ford in line without all that long-tail work of building a rapport with an electorate. Political families create an advantage that, like inherited wealth, compounds over generations, like interest payments on pennies.

I’m not sure any illusion of a meritocratic democracy survives many generations of this, but then I’m surprised that anyone could maintain the belief that we live in such a system even now. If for no other reason, I’m rooting for Singh to do well in this round because he just might provide an example of the virtue of patience in politics. But then, virtues are hardly the fashion now.