Election Image of the Day: The NDP leader had every reason to go ballistic when a man in Montreal advised him to 'cut off' his turban. What he did was far more powerful. 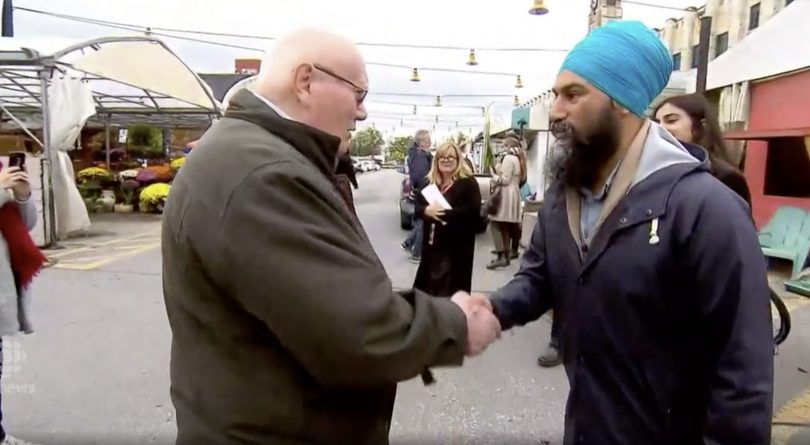 A still from a CBC News video of a Montreal man who told Jagmeet Singh that he would "look like a Canadian" if he removed his turban. (CBC.ca)

From the moment the man approached, Jagmeet Singh seemed to sense tension. The NDP leader—the first Canadian federal leader whose skin colour is not white—greeted the Quebec resident in Montreal’s Atwater Market by reaching out and gently touching his arm. “Good to see you, sir,” he began. “You okay?” The man seemed okay, a little quiet, a little hard to read. Then he leaned in. “You know what?” he muttered. “You should cut your turban off…. You’ll look like a Canadian.” And there it was: a quiet moment of casual racism that, were it not for the CBC video crew and Singh’s lapel mic, would have never been seen by the Canadian public. For Canadians of colour, the scene may seem irritatingly familiar; for the entire country, it is stunningly intimate, so quick and subtle that neither man even looks uncomfortable. Singh’s response was unflappable: “Oh, I think Canadians look like all sorts of people. That’s the beauty of Canada.” The man did not sound cruel or malicious; indeed, he may not even have considered his comment racist. It’s not a stretch to assume he supports Quebec’s controversial Bill 21, the “secularism bill,” which bars government workers (including teachers) from wearing religious symbols such as kippas, hijabs or turbans. The law, which is being challenged in court—but which neither Singh nor his main rivals will fight if elected—is a blatant imposition of one group’s values upon a multicultural society. Yet a striking number of Quebeckers are okay with it. As the man in the video tells Singh, “In Rome, you do as the Romans do.” To this, as well, Singh’s reply was a master class in dealing with racism: “This is Canada. You can do whatever you like.” Singh walked off to shake some more hands after that, as his new friend called out some surprisingly cordial parting words: “Take care. I hope you win.” Even if Singh doesn’t win the election, he won this moment.