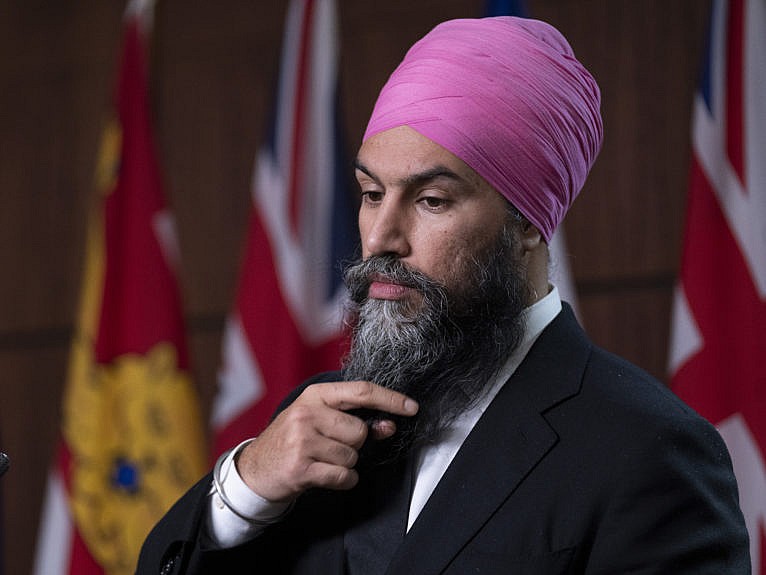 Will pay for chair: Jagmeet Singh will file a disclosure report and pay for a free $1,895 rocking chair that he and his wife, Gurkiran Kaur Sidhu, promoted on Instagram, CBC reports.

On Dec. 10, Singh’s wife posted an image of the Grand Jackson Rocker by Canadian furniture company Monte Design on her Instagram account, mentioning the company. The party said Singh would repay the cost of the chair after CBC reported it was given to him and his wife as a gift. On Sunday, Singh published an image on his Instagram page of himself sitting in the same chair cuddling his newborn daughter, with the furniture company tagged in the image. “The chair was given to Gurkiran with an expectation that she would promote it on social media. There was no expectation that Jagmeet would post about it,” NDP spokesperson Mélanie Richer said in a statement to CBC News.

Madu out: Don Braid, writing in the Calgary Herald, reports that details about Alberta Justice Minister Kaycee Madu’s call to the Edmonton police chief “have been known in government since shortly after it happened in March 2021.” Jason Kenney suspended Madu on Monday after CBC reported that he called the police about a distracted driving ticket.

Braid points out that this is political trouble Kenney doesn’t need.

It’s incredible that with Omicron surging, nearly 1,100 people in hospital, school openings in trouble, a crucial budget coming and the economy hanging in the balance, this government routinely mires itself in self-made troubles born of division and bad judgment.

Ukraine wants help: Ukraine has asked Canada to rush military supplies to its army as it faces the possibility of a Russian invasion, the Globe’s Mark MacKinnon reports from Kyiv.  Ukrainian Deputy Prime Minister Olga Stefanishyna asked Mélanie Joly, who is in Ukraine, to provide equipment. Joly promised to take the message back to Ottawa. “Many of the officials here have reiterated this demand. We know that it is important to play our part.”

Little to offer: In the Post, John Ivison reports complaints from former senior officers who say the Liberals have neglected the military: “The prime minister and his closest advisers have never taken the armed forces that seriously,” said Andrew Leslie, a former Liberal MP and ex-Canadian Forces lieutenant-general, who also said the “PMO does not see any real political payback on defence expenditures.”

McKinsey money: The opposition parties are calling on the auditor general to investigate the Liberal government’s relationship with McKinsey and Company after a sharp rise in federal contracts to the firm, the Globe reports. Federal spending on contracts with McKinsey rose from nearly zero in the final years of the former Conservative government to $17.2-million. MPs note that in the early years of the Liberal government, Dominic Barton served as both chair of a federal advisory council on economic growth while also leading McKinsey.

Airlines cut flights: Canada’s two biggest airlines are cutting thousands of flights because of the pandemic, CP reports. WestJet said Tuesday it will cancel 20 per cent of its February flights, blaming “government barriers.”

Mostly shut: A labour dispute has shut down most flights into St. John’s, CBC reports.

Grocery troubles: Grocery stores are struggling with labour and product shortages that could leave shelves bare, experts tell CP. “If we have to keep sending people home, at a certain point stores are not going to be able to operate,” said Gary Sands of the Canadian Federation of Independent Grocers. Grocers want rapid tests to keep shelves stocked. A vaccine mandate for truckers isn’t helping, the industry says.

Against unvaxxed tax: On Tuesday, Jagmeet Singh condemned Quebec’s plan to tax the unvaccinated, calling it a threat to the universal access to health care, the Star reports.

Heal thyself: Speaking of the unvaxxed, Global’s Ashleigh Stewart has a good long read on a network of Canadian doctors who oppose COVID-19 vaccines, raising a good question about whether medical regulators are doing enough to hold doctors to account for their public statements.

Forced labour: Ottawa has killed two contracts with a supplier over allegations that the gloves it manufactured in Malaysia were made with forced labour, CBC reports.

New direction for mother corp? The Post notes that Pablo Rodriguez’s mandate later instructs him to “modernize” the CBC,  making it “less reliant on private advertising, with a goal of eliminating advertising during news and other public affairs shows.” There may be money for that: “The letter doesn’t include a figure, but during last year’s federal election the Liberals pledged $400 million over four years for that purpose,” the Post notes.

Off out: Speaking of the CBC, As It Happens host Carol Off is leaving the program after 15 years of great work.