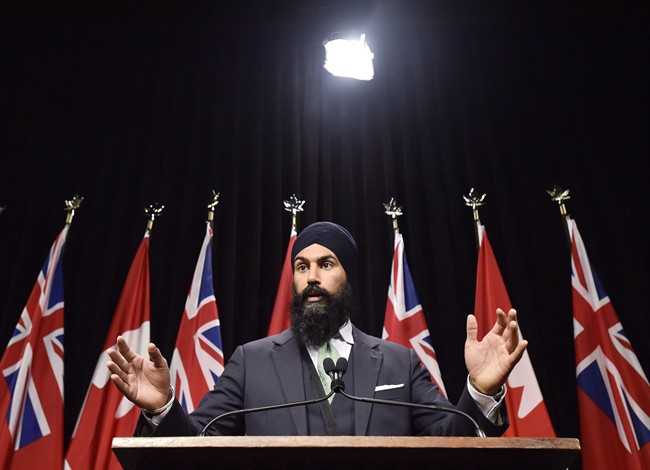 NDP MPP Jagmeet Singh speaks at Queen’s Park in Toronto on Wednesday, October 28, 2015. Ontario deputy NDP leader Jagmeet Singh is set to launch a bid for federal leadership next week, The Canadian Press has learned. Sources familiar with Singh’s plans say he will make the announcement at the Bombay Palace in Brampton, Ont., on Monday night.THE CANADIAN PRESS/Nathan Denette

OTTAWA – Ontario deputy NDP leader Jagmeet Singh is poised to launch a bid for federal leadership next week, The Canadian Press has learned.

Sources familiar with Singh’s plans say he will make the announcement at the Bombay Palace in Brampton, Ont., on Monday night – the venue where he held an election party in 2011 when he entered provincial politics.

At the time of the announcement, Horwath said Singh had been a “dynamic force” in politics, adding he increased political participation among young people who viewed him as a community leader and mentor.

Inside the provincial wing of the NDP, Horwath also acknowledged Singh’s work to push for provincial reductions of auto insurance rates and improving awareness around precarious employment fuelled by temporary job agencies.

Singh, regarded as a young and energetic leader, has also received nods from Toronto Life magazine on its lists of “50 Most Influential” and “Toronto’s Best Dressed.”

There are four official candidates in the lengthy race to replace Tom Mulcair as NDP leader in October.

First-quarter results from Elections Canada indicate Angus is far ahead of his competition on the fundraising front.

The NDP says former veterans ombudsman Pat Stogran and Ibrahim Bruno El-Khoury, the founder of a Montreal consulting firm, are not considered official candidates because they must submit nomination paperwork and a registration fee.

Stogran and El-Khoury’s names appear on the Elections Canada website as candidates while Singh’s does not.