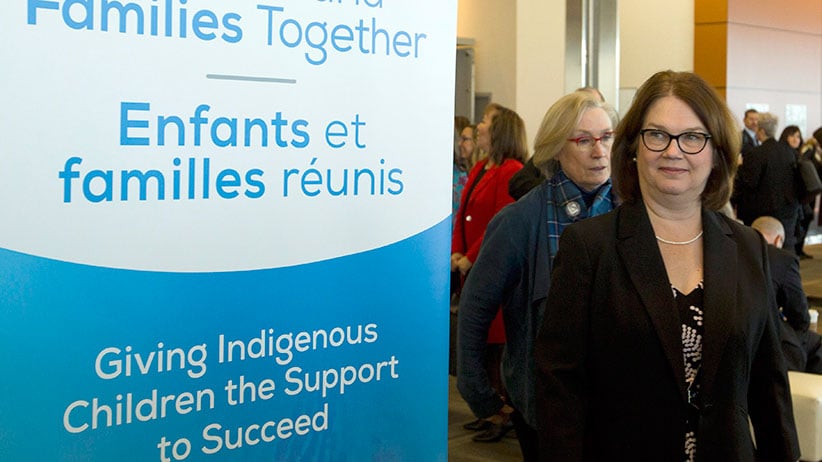 Philpott (right) and Caroline Bennett, the minister of Indigenous relations and northern affairs, during a break at a two-day emergency meeting on Indigenous Child and Family Services in Ottawa (Fred Chartrand/CP)

Indigenous Services Minister Jane Philpott leads a young, five-month-old department, and this week she wasted no time opening a two-day emergency meeting to address the gross overrepresentation of Indigenous children in foster care. Inside the Shaw Centre in downtown Ottawa, Philpott read the stats aloud: In 2016, Indigenous children represented only seven per cent of kids under 14 in Canada, but made up 52 per cent of those in care.

The former health minister has called the issue a “humanitarian crisis,” and together with Indigenous leaders, provincial ministers, elders, child-welfare experts and advocates from across the country will discuss ways to bring children home faster and prevent more from being lost in the system. “The doors are closed at the residential schools but the foster homes still exist,” she said during her opening remarks, citing a line from the Truth and Reconciliation Commission’s final report. For Philpott, it’s been a week devoted to outlining her mission to close the socioeconomic gaps that exist between Indigenous peoples and the rest of Canada.

On the eve of the emergency meeting, the minister held a press conference to announce the five key priorities that will guide her department: better health outcomes; education; child and family services; infrastructure and housing; and a new fiscal relationship providing long-term funding arrangements for First Nations. She didn’t showcase much in the way of achievements, as ministers at these moments  wont to do, instead noting how much work lies ahead. Touching on the Liberal government’s high-profile promise to eliminate boil-water advisories on First Nations, she reported that 40 have been vanquished, but 26 more have been added.

As for the meeting on Indigenous kids in care, Philpott stressed the point is not “assigning blame,” but rather “acknowledging the severity and importance of the crisis and determining how each of us can be part of the solution, part of the urgent need for reform–to keep children and families together.” In her opening remarks, Philpott announced six commitments to get there, including a promise to implement compliance orders arising from a much-cited Canadian Human Rights Tribunal decision calling on the government to properly fund Indigenous child-welfare, and to improve data collection, sharing and reporting. “No one actually knows how many Indigenous children are in care across the country,” she acknowledged.

Most of the next two days’ proceedings, however, will occur behind closed doors, save for 45 minutes each morning for press. The schedule is filled with sharing circles, panel discussions and leadership meetings. But at the end, there won’t be a closing plenary or progress report, an unusual decision in these types of political gatherings—especially from an ambitious minister.

Most provincial ministers and Indigenous leaders arrived voicing optimism. “Our reforms are going to go ahead no matter what,” says Scott Fielding, Manitoba’s minister of families, where nearly 90 per cent of children (roughly 10,000) in foster care are Indigenous. “I think where the federal government can play a substantial role is in addressing the root causes of why someone might be taken into care—like housing, infrastructure and drinking water on reserves.” Still, Fielding stresses that policy needs to take into account regional differences: “This can’t be a process driven by Ontario or Ottawa politicians and bureaucrats.”

The current crisis has been created, in part, because of chronic federal underfunding that incentivizes the removal of children from their families, the tribunal found. Philpott has promised money for child-welfare services in this year’s budget, saying she’s received assurances from the minister of finance, Bill Morneau. In his opening remarks, AFN National Chief Perry Bellegarde said the two-day meeting is an opportunity that can’t be squandered. “It’s about the lives of young children and together we have a duty to resolve this together,” Bellegarde told Maclean’s prior to the meeting.

Looking around the room on the morning of the first day, Ontario Regional Chief Isadore Day was disappointed to discover that no youth were part of the proceedings. “We’re possibly starting off on a little bit of an incorrect footing,” he says. Day is cautious but optimistic, saying “this is first time we’re seeing a wide open meeting on child-welfare and a government exposing itself and its political vulnerability.”

In a sprawling meeting room with a buffet in the back, the majority on hand stood tall when asked to rise if they were Indigenous. It was evident that few, if any, federal governments in the past have gone into discussions with Indigenous peoples in quite this way, and for that, Philpott has been lauded. But others wonder whether this meeting happens without the three orders of non-compliance from the human rights tribunal since it first issued its ruling in 2016.

Whatever the impetus, Indigenous leaders like Day expect results. “If they renege on the issue of our children on this file,” he says, “there’s going to be hell to pay.”