Jason Kenney begins work to unite the right in Alberta

Kenney says he will not run for seat in legislature in near future, will focus on working on plan to merge with Wildrose 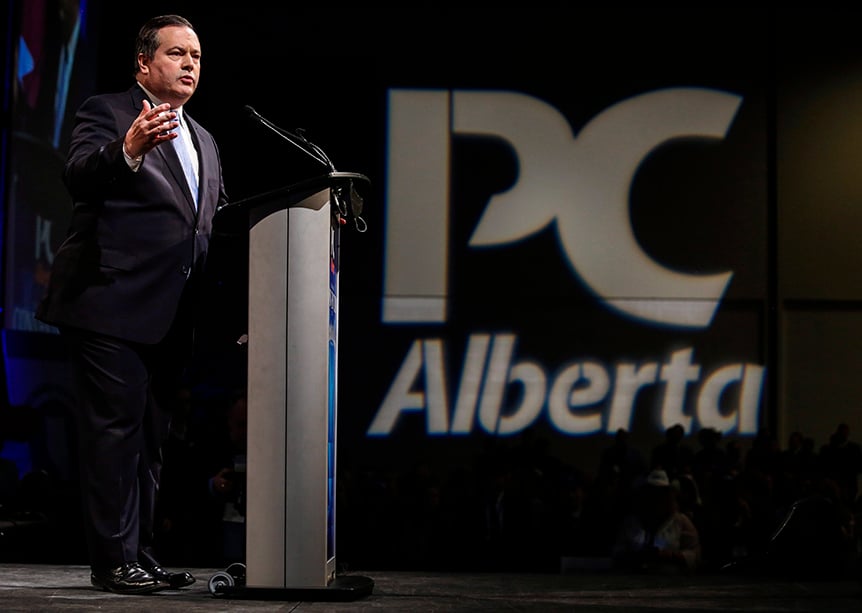 CALGARY – Alberta Progressive Conservative Leader Jason Kenney says the wheels are in motion on his unite-the-right plan, with the goal of a new party and an elected leader in place a year from now.

“This is not written in stone (but) if there’s any way that we can accelerate that timeline, I’m all ears,” Kenney told reporters Sunday after he met with the Progressive Conservative board of directors.

“I want us to go as quickly as we can … but not jeopardize the unity project by speeding this up unnecessarily.”

On Saturday he won 75 per cent of the vote in a delegated convention to become the new party leader on a platform to dissolve the PCs and merge with the fellow right-centre Wildrose party.

Wildrose leader Brian Jean has already said he is in favour of joining forces if his members approve. Kenney also says any unity move must be approved in a referendum, although he declined Sunday to say what percentage he believes would represent a vote to merge.

The two leaders will meet Monday in Edmonton.

Kenney says the plan begins with appointing a negotiating team to get a framework deal in place for members of both parties to vote on.

Kenney also says he doesn’t anticipate running for a legislature seat in the near future but will focus on working on a merger plan.

He said while formal talks progress, informal unity can begin right away.

Kenney said he is exploring having the Wildrose and PC caucuses in the legislature work together, and is urging constituency boards of both parties to get to know each other.

Party president Katherine O’Neill called the closed-door meeting positive with the board rallying behind Kenney.

“You can tell around the table today that people want to work with our leader,” said O’Neill.

“There are a lot of unanswered questions still, but people want to be at that table helping move us to next steps.”

Kenney, however, told reporters that the party’s executive director, Troy Wason, has resigned.

Under Alberta rules, parties cannot simply vote to merge their organizations and bank accounts. Instead, they must surrender their assets.

The next election is scheduled for the spring of 2019.

Kenney’s win has opened divisions in the PCs. Critics say under Kenney, the party will tack right on social issues and rights of minorities similar to the Wildrose

The NDP, Liberals and Alberta Party all took to social media within hours of Kenney’s win to urge progressive PC supporters to join up.

Kenney also walked back Sunday a promise he made in his victory speech to repeal all legislative and regulatory changes made under Premier Rachel Notley’s NDP, starting with the multibillion-dollar carbon tax.

NDP members and supporters pointed out that repealing everything would mean cutting the minimum wage by a third, raising the small business tax back to three per cent from two, and allowing union and corporate donations to political parties.

Kenney said policy is still to be hashed out by party members, but said he would undo only the “most damaging aspects” of those NDP policies as they relate to the economy.

For example, he said, he wouldn’t repeal the ban on corporate and union political donations.