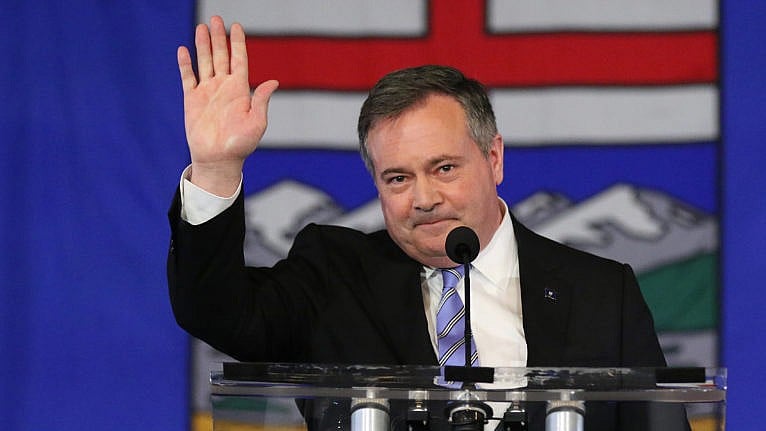 Kenney speaks in response to the results of the United Conservative Party leadership review in Calgary, May 18, 2022. (Dave Chidley/The Canadian Press)

Jason Kenney won the battle of Alberta on Wednesday night, but not by enough. He took 51.4 per cent of 34,298 votes in a UCP leadership review and promptly announced he would step down, the Calgary Herald reports.

“While 51 per cent of the vote passes the constitutional threshold of majority, it clearly is not adequate support to continue on as leader,” Kenney said to a crowd gathered at Spruce Meadows in Calgary. “That is why tonight I will inform the president of the party of my intention to step down as the leader of the United Conservative Party.”

Supporters in the room groaned in disbelief at the surprise announcement.

CBC’s Vassy Kapelos spoke for all of us.

Early reviews: In the Post, Carson Jarema paid tribute to a leader he sees as a consistent conservative. In the Calgary Sun, Rick Bell wrote that Kenney never learned to listen.

In the Herald, Don Braid predicts a lively race will soon be under way.

On your mark: There will be a struggle over whether the UCP edges more to the centre, or veers sharply to the right. Many of the MLAs who opposed Kenney prefer the latter. New MLA Brian Jean will run. Danielle Smith will likely join in, too. They’re well-known voices from the party’s past, but many members will want to move beyond the old merger struggles. Jobs Minister Doug Schweitzer’s name often comes up. So does Finance Minister Travis Toews. Other campaigns will take shape very quickly.

Fast attack: Also out Wednesday was Ed Fast, who started the day as CPC finance critic, CP reports. He said Wednesday that Pierre Poilievre’s pitch to fire the Bank of Canada governor hurts the party’s credibility on economic issues. Fast is co-chairing the leadership campaign of Poilievre rival Jean Charest. “I’m deeply troubled by suggestions by one of our leadership candidates, that that candidate would be prepared to interfere already at this stage in the independence of our central bank,” Fast said. Later, Candice Bergen announced Fast will not be critic any longer.

United Grits: In the Globe, Lawrence Martin points out that while the Conservatives are divided, the Liberals are unusually united, at least for now.

Racism probe: The CPC is investigating a complaint from the Patrick Brown campaign about a racist email which expressed support for Nazism, CBC reports. Michelle Rempel Garner, co-chair of Brown’s leadership campaign, posted the text of the email Wednesday. She said the message was sent after the campaign sent en email denouncing the “white replacement” conspiracy theory. Poilievre denounced the email: “I reject all racism. If you are a racist, I don’t want your vote.” Rempel had a column in the Post on Wednesday urging Canadians to reject the racist conspiracy theory.

Deplores racism: Marco Mendocino says the racism and white supremacy behind the mass shooting in Buffalo, N.Y., are alive and well in Canada, As It Happens reports: ” It is a harsh reality that exists not only in the United States, but, indeed, in Canada and around the world.”

Justin Trudeau said on Wednesday that Conservative “tough on crime” policies were “really just tough on Black Canadians and Indigenous Canadians,” Global reports. The Conservatives accused the Liberals of planning to “make it allowable for criminals to get house arrest” by repealing mandatory minimum sentences.

“He’s going after law-abiding Canadians but going soft on gangsters,” said Conservative MP Shannon Stubbs before asking: “Will he scrap Bill C-5?” Trudeau said the government is repealing “failed” Conservative policies. “They claim to be tough on crime but really they’re just tough on Black Canadians and Indigenous people,” Trudeau said before being drowned out by shouts.

Watching 96: Trudeau said Wednesday his government is watching “carefully” how Quebec’s Bill 96 is playing out and defended the right of MPs to protest, CTV reports. He commented after members of the Bloc Quebecois argued it was “unacceptable” that a “large contingent” of Liberal MPs went to Montreal over the weekend to demonstrate against Bill 96, a language law that Quebec anglos say would restrict their access to services.

Gala or jail? Crown prosecutors want “Freedom convoy” organizer Tamara Lich sent back to jail, claiming she breached bail conditions by agreeing to participate in an event next month, CTV reports. At a gala on June 16, Lich is to receive the “George Jonas Freedom Award” from the Justice Centre for Constitutional Freedoms. The Toronto gala will feature a keynote speech by Post columnist Rex Murphy. VIP tickets cost $500.

Ford charged: Ottawa law prof Amir Attaran has filed a private criminal prosecution against Doug Ford for breaking federal quarantine law during a March newser in which he took off his mask, the Citizen reports.

Buddies now: Susan Delacourt notes in the Star that Ford, who once inveighed against Trudeau, is now, in campaign mode, talking about how well they work together.

Ford doesn’t talk about Trudeau all of the time while he’s on the road campaigning to keep his job as premier after June 2. But after that election-eve announcement for the auto industry in Windsor, the Progressive Conservative leader has dropped occasional references to how well he works with the Trudeau government. During the debate in North Bay a week or so ago, Ford even talked about those long nightly phone calls he had during the early days of the pandemic with Chrystia Freeland, the now-deputy prime minister he called his “therapist.”

Pox in Canada? Health officials said Wednesday that the first confirmed case of monkeypox in the United States this year recently travelled to Canada, Global reports. PHAC said no cases of monkeypox have been reported to the agency as of Wednesday evening.

Ejected: Two members of the Saskatchewan legislature were ejected for unparliamentary language on Wednesday, CP reports.

Prince mobbed: Prince Charles was mobbed by well-wishers during a visit to Ottawa. Maclean’s royal watcher Patricia Treble was there, noting that the prince and the Duchess of Cornwall aim to avoid mistakes Charles’s eldest son encountered during an ill-fated tour of the Caribbean in March.

Unlike the Cambridges’s trip, which back-loaded important events, this one begins with perhaps the most sensitive issue for the host nation: the damage inflicted on Indigenous peoples by the government policies, especially the horrors of the residential school system. In his speech at the official greeting on Tuesday, Charles said: “I have greatly appreciated the opportunity to discuss with the Governor General the vital process of reconciliation in this country—not a one-off act, of course, but an ongoing commitment to healing, respect and understanding.

Byelection coming: Liberal Sven Spengemann is leaving his Toronto-area seat to take a UN job, which will force a by-election later this year, CP reports.