Rhetorical bombs are great, but never underestimate the destructive power of the humble political blow-dart 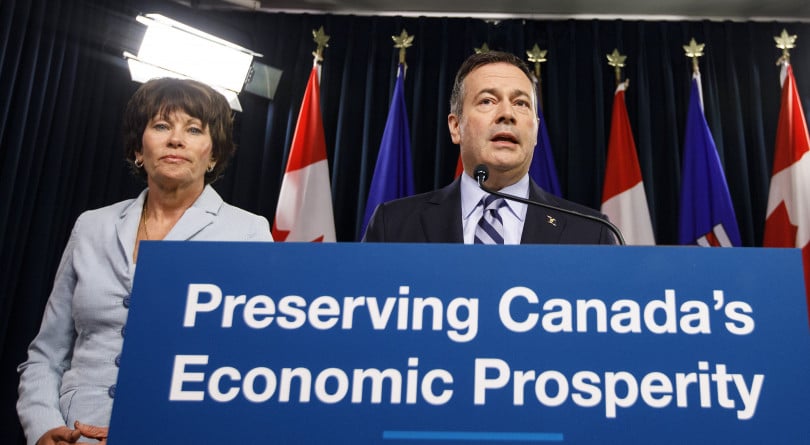 At the very least, Kenney is no longer provoking hoots of Albertan glee by musing he’d make Vancouver carbon-free by 2020. He’s speaking to a different audience than those at his partisan rallies of the last month—the retributive rhetoric delivered the comfortable majority Kenney wanted. As promised, on Day 1, his cabinet proclaimed into law the bill his NDP predecessor passed last year giving Alberta the power to levy a partial (or full) oil embargo on British Columbia, and as promised, John Horgan’s government swiftly sued to block that provincial power, which a judge had ruled it couldn’t do until the law was in force. As is politically and tactically convenient, Kenney isn’t spelling out what obstructive anti-pipeline measure on B.C.’s part would actually trigger this proverbial turning off of the taps, a move that would cause sharp pain to Vancouver motorists and Fort McMurray oil workers alike.

Kenney benefited during the election by blurring the lines between the bludgeoning act of restricting B.C. oil supply and the actual, much blander procedural step he was promising to take the first day. The new premier is now content to use it as Rachel Notley did: as a grim threat lying in wait should B.C. suddenly find itself in the position to affect whether or not Trans Mountain expansion pipeline can go ahead. (Current status: Horgan’s bid to restrict extra bitumen flow into his province—the idea that infuriated Alberta in the first place—has been heard and awaits judgment by the B.C. Court of Appeal.) Horgan claimed Kenney told him he doesn’t actually intend to make good on his threat, after “decompressing from the high rhetoric of campaigns,” and the new premier’s spokeswoman disputed that. Its effect is almost entirely in its potential, a loaded bazooka in Kenney’s arsenal.

RELATED: Why Jason Kenney’s workaholic style may not work when he’s premier

It’s all the more potent a threat in this period of skyrocketing gasoline prices in the Lower Mainland—currently around $1.70 per litre. While his government is suing, the most left-leaning premier in Confederation has refrained thus far from trash-talking Kenney, arguably the most right-leaning premier. He would rather, for now, play nice, and do little to trigger the exact opposite of relief at the pumps. He’s lobbying the federal government as owners of the existing Trans Mountain conduit to somehow boost shipments of refined oil through the pipeline right away, though there’s the matter of contracts the pipeline is committed to fill. Horgan even demurred when asked if he’d be open to a Trans Mountain pipeline expansion if it brings more refined fuel to his fellow commuters (as opposed to Asia-bound exports). Kenney would claim this as a major victory, though supply-and-demand fuel economics may prove more influential in such a shift than Kenney’s pressure play.

Though he’s not the make-‘em-pay tough guy he projected to voters, Kenney appeared on steadier ground in his pipeline tactics than either of his NDP counterparts, Notley or Horgan. The former Alberta premier accused Kenney of political posturing, but only because it’s a higher level of posturing that Notley herself adopted by drafting this provocative bill in the first place. And if a judge strikes it down now that the law’s proclaimed,  it just reveals how hollow this threat always was coming from either premier. And Horgan: he wants more pipeline capacity for oil to serve his residents, but doesn’t want an enlarged pipeline that creates even more room?

Meanwhile, on the eastern front…

On Tuesday, Kenney spoke out about the Trudeau government’s Bill C-48 oil tanker ban for B.C.’s north coast and said he’d try blocking it in court if the Senate passes it. On Wednesday, he did the exact same thing about the Bill C-69 environmental assessment act for pipelines and other major projects. And this is on top of his campaign vow to create more legal jobs in Alberta further by launching a challenge against the federal carbon tax. To less fanfare, however, the new premier has signaled reduced interest in weakening the Notley government’s climate change regime. In testimony to a Senate committee visiting Edmonton, the premier said he’s open to modifying his plan on large emitters, which is markedly weaker than Alberta’s current policy (also, potentially, than Ottawa’s federal backstop plan for high-polluting plants).

RELATED: If Jason Kenney’s truck could run in an Alberta election, it just might win

He’s also walked back the United Conservative Party’s plan to scrap a 100-megatonne cap on oil sands emissions, a limit Notley adopted as a compromise between environmentalists and oil sands executives. While this wasn’t explicit in the UCP platform, top officials told reporters in an anonymous background briefing it was indeed part of the agenda. Now in power, Kenney is shrugging off what his advisers got planted in the media, saying it’s not in his immediate plans. The sly about-face would check a number of boxes for the Trudeau Liberals, since keeping the cap in place was a condition of Ottawa’s approval of the Trans Mountain expansion and for Trudeau’s Bill C-69 to exempt some new oil sands developments from greater scrutiny. A casual abandonment by Kenney of this unwritten promise would irk some in his hardline base, but won’t actually have any impact on current or near-term oil sands projects. Heck, the Suncors and Canadian Natural Resources of the world wanted the cap in the first place, as a fig leaf to protect against warnings that Alberta was on a path of endless, runaway greenhouse gas emissions.

Kenney remains on a warpath with environmental groups and their foreign benefactors; they might remain great political foils if Horgan and Trudeau suddenly become cooperative. By June 18, after all, the federal cabinet is likely to once again green-light that pipeline project it owns. His first week offers several more opportunities to see a diplomatic or bellicose Kenney: he’s in Ottawa on Thursday to meet Justin Trudeau and testify at the Senate on C-69, and then in Toronto on Friday to meet Ontario Premier Doug Ford and speak to the Canadian Club. On the same day, he’ll also have to react to the Saskatchewan Court of Appeal’s decision on the first provincial bid to thwart the federal carbon tax.

Kenney jumped into Alberta politics with a reputation as one of Ottawa’s most cunning and deliberate politicos in his days as minister and Stephen Harper consigliere; he proved an effective organizer and campaigner with his creation of the United Conservatives and his recent electoral triumph. Now, we get to watch for him to fulfill promises of more major accomplishments, but also watch with curiosity as he lays smaller building blocks toward those successes.

In one such brilliant measure, he announced Mark Cameron as Alberta’s deputy minister for policy coordination. Cameron is a Kenney friend going back to their mid-’80s days in the B.C. wing of the federal Young Liberals (hey, some views evolve!) and was a senior policy advisor on climate policy in Stephen Harper’s PMO—a rare alumnus of Harper’s camp who garners respect from progressive smart people. Until last week, Cameron ran Canadians for Clean Prosperity, a group that advocates for carbon pricing. Kenney, who’s trying to build an unbroken chain of Conservative leaders bent on killing carbon taxes, has co-opted and stifled the public voice of one of the few Canadian conservatives who like carbon taxes.

The new premier won by promising to fire political bombs and water cannons. But he doesn’t underestimate the quiet effectiveness of the humble blow-dart to knock out foes.