May 25: Doug Ford denies paying any membership fees to help a PC candidate and as they campaign, female candidates are facing every type of harassment

NDP government or no, “Alberta still looks like Alberta” to Jason Kenney. The supposed conservative—excuse me, “free enterprise”—lean of the province’s people and some promising poll numbers provided all the permission the former federal cabinet minister needed to lay out a zealous plan for his presumed premiership in a live conversation with Maclean’s Paul Wells last night.

Their talk toured through what the federal government should be doing differently to get that Trans Mountain thing moving, why Kenney has recently found his voice on equalization’s inequalities, and how he plans to keep the “u” in the United Conservative Party even as he downplays the more stridently SoCon positions preferred by the delegates at the group’s recent policy convention. [Maclean’s video and liveblog]

Still, Kenney might want to look at Alberta again, per colleague Jason Markusoff, who writes that the repatriated capital resident of two decades owes his lead to the fact that voters “dislike the NDP moreso than because they love his brand of fiscal hawkishness.” [Maclean’s story]

Ontario occurences: A Brampton Tory says he never laid eyes on any purportedly purloined highway commuter data. And Doug Ford says he didn’t pay the membership fees for cardboard cut-out PCs to help a former aide to his brother win an Etobicoke nomination in his pre-leader days. But lo, the Liberals have audio and an affidavit. [National Post story, CBC story]

Ford did yesterday win the backing of the mayor who made Mississauga into a city(ish). Hazel McCallion gave the Tory leader the nod partly because of his promise to “fix Ontario’s finances,” but she’s also endorsed Liberal budget man Charles Sousa. [Tweet, Tweet]

Elsewhere, the most agéd major party candidate in Niagara West is twenty-seven years old. So fresh-faced is this collection that the NDP’s two-decades-on-earth standard-bearer is a Brock classmate of the incumbent Tory. [Toronto Star story]

It remains to be seen if their political pairing will go as far as former Liberal leadership rivals Bob Rae and Michael Ignatieff, previously University of Toronto roommates and fellow editors at the arts review section of The Varsity, Canada’s best student newspaper. (Guess who else is an alum?) [Maclean’s story, The Varsity archive] 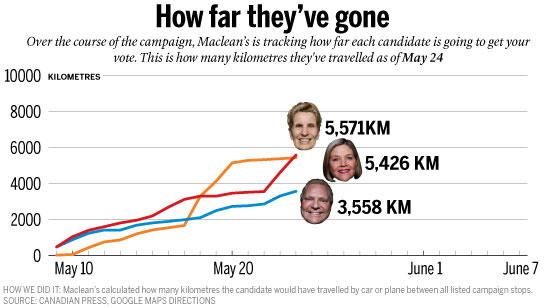 Most Quebecers would prefer to fill out one tax return instead of two at 11 p.m. on April 30 every year, but too bad, so sad, the CRA has a lot of employees in the province. [Globe column]

Nice government you got there: It’s getting to contract negotiation time for many units of the country’s biggest bureaucratic union. The Public Service Alliance of Canada warns they’ll get the lawn signs out against the Liberals if the ruling party doesn’t play fair. [Hill Times story]

The feds have finally selected someone with whom to entrust their “cool new stuff” piggy bank. Pension fund fellow Pierre Lavallee is the new CEO of the platform-promised, arm’s length Canada Infrastructure Bank, which will seek private investor money to mix in with the government’s own. [Bloomberg story]

Further afield, the government isn’t averse to sending spare helicopters to peacekeep in Mali, if necessary. It’s also looking to soup up the search-and-rescue chopper cohort, and float a few more into the sky. [Canadian Press story, CBC story]

Around the Hill: Who is the master of plaster?

In this space, we expound on parliamentary spaces that go mostly unseen by passersby. Today, we asked our in-House expert, Ottawa bureau chief John Geddes, to point to something we’ve missed.

Geddes recalled a case of mistaken identity he revealed two years ago. The people who tell the Hill’s official story had claimed sculptor Enrico F. Cerracchio was the man responsible for so much ornate parliamentary plasterwork. 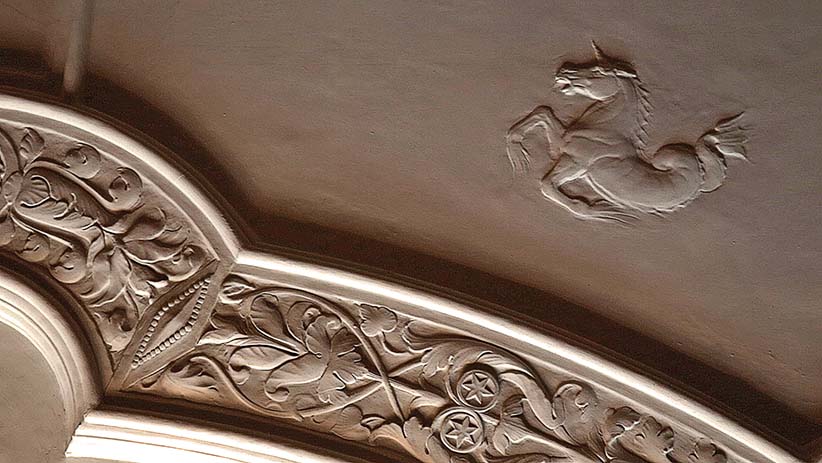 A nautically-themed detail on the ceiling in the Prime Minister’s office on Parliament Hill. (Photograph by Carla Antonio)

But Enrico’s story didn’t ring true to Geddes. He made a few calls and revealed the real master of plaster to be Freddie Cerracchio. Parliament changed its references. Maclean’s got action.