Jason Kenney wooed Alberta's conservatives. Next, the rest of Alberta.

Throwing red meat to the base is fun, but Kenney's social conservatism could now be a liability

Jason Kenney started his shift from federal to provincial politics 16 months ago by presenting himself as Ralph Klein reincarnate, so it shouldn’t surprise that he echoed ol’ King Ralph, that late conservative populist, on Saturday.

“It’s another miracle on the Prairies,” Jason Kenney declared after he won the United Conservative Party leadership vote by nearly a two-to-one margin over Brian Jean, the former Wildrose party leader. Klein declared “miracle on the Prairies” on election night in 1993, after he secured the Alberta Progressive Conservative dynasty’s seventh straight majority despite a bruising provincial deficit and a strong challenge (and erstwhile poll lead) by the Alberta Liberals. Two decades ago, the incumbent premier had tenuous claim to underdog status but his powerhouse party admittedly had some clawing back to do. In Saturday’s case, a former federal cabinet minister renowned as one of his generation’s shrewdest campaigners made good on yet another case of frontrunner status, having earlier this year easily seized the helm of the creaky PC ship and seamlessly executed a merger vote to fuse the Tories and Wildrosers into a single party.

Now he inherits leadership of a crew of overwhelming favourites to make Rachel Notley’s NDP a one-term government. Since winning in May 2015, the NDP has trailed in 17 of the last 18 province-wide polls, regardless how many conservative parties opposed them. Many of the first-time NDP voters who wanted desperately to end four decades of Tory rule last time have skedaddled; in one recent poll, 40 per cent of admitted NDP voters agreed Notley’s government “is out of touch with what Albertans want.”

It’s tempting at this point to call Jason Kenney the presumptive premier-in-waiting. But the next provincial election is about 18 months away and, hard as it’s become to bet against Kenney, in Alberta politics, funny things can happen on the march to inevitability.

Kenney now gets to speak to the broad Alberta public—let’s see how that goes. He spent the last 16 months hurling red meat to Alberta’s conservatives, a group more inclined to lap up his Justin Trudeau-bashing, us-against-them threats to fight on federal equalization and his repeated references to the NDP as the “accidental socialist” government. To be sure, a majority of Albertans are no fans of the Trudeau Liberals, yet Kenney acknowledges his need to reach a broader audience—even if he doesn’t say he’ll actually modify his message. “We understand that in order to be a compassionate, caring province, we must be prosperous first,” he said in his victory speech in Calgary. See? He cares and has compassion, Albertans who have already heard repeated threats from Notley of Kenney the Public Service Slasher!

New Democrats feel their best shot at re-election cuts a straight path through Kenney’s social values, policies and past comments against same-sex marriage and abortion, as well as his more recent comments that parents ought to be informed that their kids are in school gay-straight alliances. “I will not ever, ever ever let them out gay kids,” Notley told an NDP gathering last month, to raucous cheers from her partisans.

In the 2012 election, the Wildrose party blew a lead after candidates’ crudely homophobic and racial comments were hit social meda, including one minister saying gay people should burn in a “lake of fire.” While the NDP would dearly like to repeat this trick, remember that in 2012 Albertans were drunk on another economic boom. The comeback from recession is ongoing but it’s likely that the 2019 electorate mood will still be dominated by economic struggles or at least rough memories from the NDP’s early days of tax-hikes and private-sector job carnage—which means voters may be busier thinking about jobs and debt rather than worrying about social issues. Still, the 2012 Wildrose collapse was caused by social conservatism of some no-hope candidates; in this case, it’s the values of the UCP leader himself in question. It’s safe to assume the NDP will make Kenney’s past and present comments the focus of their attacks from now to 2019.

Kenney had campaign organizers and surrogates dedicated to cultivating evangelicals, Mormons and other church electorates. While he didn’t want to risk alienating them—and a whisper campaign went around questioning Jean’s own Christian devotion, Jean’s team had fumed—it’s unclear what Kenney could actually promise them, short of not completely stifling their views. “In a big-tent coalition, you need to have space and flexibility to have somewhat different views as long as they’re respectful,” he says. 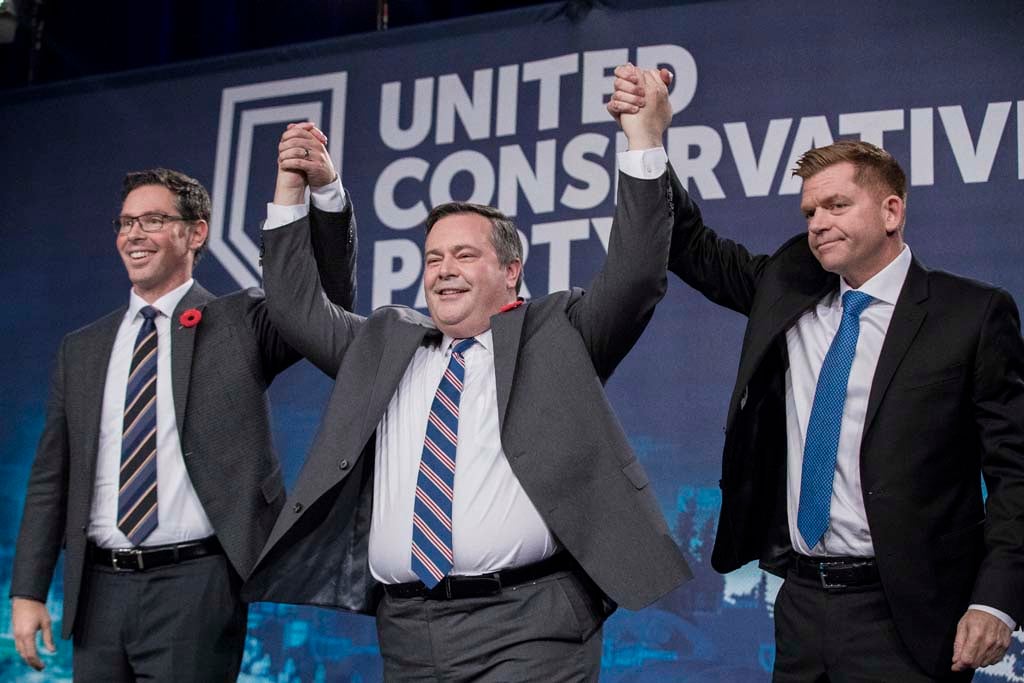 To woo the anti-establishment Wildrose members who originally broke away from the squishier PCs, Kenney stayed deliberately vague in most policy areas, and promised to let the membership devise the party’s stances. Wildrosers had a history of refusing to moderate, but Kenney learned political leadership at the feet of fellow social conservative Stephen Harper, who excelled at letting certain elements hijack the party agenda for strategic advantage. There’s also the principle Kenney will inherit from the former Alberta PCs—power and retention of power as the key organizing principles. They know this the so-con stuff is Kenney’s weakness, and the success-minded pragmatists will bid to limit Notley’s ability to exploit it.

Kenney’s United Conservatives must also enter 2019 with some sort of coherent environmental policy to underpin the new leader’s pledge to make his first government bill a repeal of Notley’s carbon tax. While axing a tax on the fuel Albertans produce is popular, much of the energy sector appears reasonably happy a provincial government is doing things to erase Alberta’s old image as an environmental laggard; last month, oil sands heavyweights Suncor and Canadian Natural Resources Ltd. talked up Alberta’s new environmental efforts to European investors, and their executives joined Notley on stage when the climate change plan and carbon tax were first announced.

When Maclean’s asked Kenney before the leadership vote about a carbon policy that these industry leaders may now view as something that must be replaced if it’s repealed, he did something aspiring conservative premiers seldom do in Alberta: he took a shot at the corporate titans. “I don’t think energy execs are very good at playing politics. They’re technical people, engineers, geologists, and finance people, and they’ve tended to get all of this wrong,” he said.

“It’s not about reducing emissions on upstream production. It’s about making grandma pay more to heat her home,” he said. “This is why the energy companies are for it—it doesn’t add significantly to their bottom line; it imposes the cost downstream.”

Since Notley’s own opposition days of painting Alberta’s oft-hallowed “job creators” as fat-cat corporate barons, she’s learned to work with the big companies. While Kenney doesn’t exactly have to pivot to convince people he’s business-friendly, he will likely have to make efforts to assure an oilpatch that likes regulatory consistency that he won’t whipsaw them back into a rules-lite climate regime and pitched confrontation with Trudeau’s mandate for all provinces to tax carbon (a tussle which Kenney has promised to conservative voters).

Kenney faces another potential liability—that, as unpopular as the Notley NDP is, voters also don’t want a swift return to the arrogance and entitlement of the old Alberta Tory regime. In an interview, he recalled an elderly woman cautioning him at a recent town hall: “‘Jason, I want to vote for you, but I’m still skeptical.’ And it’s not just coming from cranky former Wildrosers; it comes from all corners,” Kenney said.

There’s a throng of former Tory MLAs and cabinet ministers who backed Kenney in hopes of getting back on their familiar gravy train, and while the new leader will want some experienced hands on his team, an abundance of them may prove problematic. Kenney wants to put a new face on the old inevitability of Conservative victory in Alberta. He has 18 months to either seal it or blow it.