Jason Markusoff reports from the campaign trail: Rachel Notley wins strange praise from a stranger place. And NDP candidates are no longer running campaigns out of their cars. 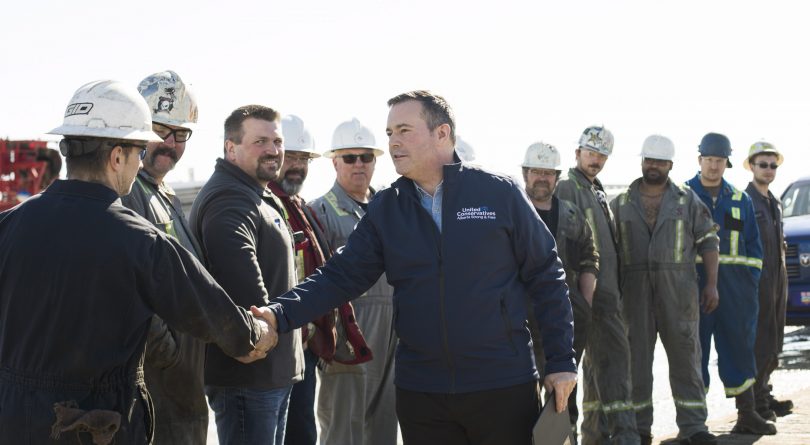 Jason Kenney has promised multi-point plans to stick it to Ottawa, and his equalization reform push gets the most attention. But rejigging the equalization formula wouldn’t directly benefit Alberta; it would merely give less to poorer provinces. A United Conservative plan announced Saturday is alarmingly different: demand Ottawa stop giving provinces cash through the $55-billion Canada Health and Social Transfer, and instead transfer “tax points”—that is, lower federal income taxes by an equivalent amount and let provinces raise taxes to recoup it (or not, as they choose). “This is one very powerful way of shrinking Ottawa’s control over Alberta and being able to be masters of our own destiny,” Kenney said.

A giant problem for everyone else outside Kenney’s current province: Ottawa’s transfer program spreads money on a per-person basis, so Alberta gets 12 per cent of the total. Because Albertans are so much wealthier than everyone else, they contribute 19 per cent of federal personal income taxes. To recoup the same amount for health care and other services, Alberta wouldn’t have to raise taxes by as much as Ottawa lowers it, while some provinces must hike taxes by much more. Alberta would benefit by $500 per person, according to calculations by University of Calgary economist Trevor Tombe, while Ontario and B.C. would reap minor advantages. “It screws over seven of the provinces,” he tells Maclean’s. “It would be hard to imagine designing a reform that would benefit Alberta any more than this.”

No sane Prime Minister would agree to a move that exacerbates the very provincial disparities that equalization aims to smooth out; nor would any province likely join Alberta in advocating for it. Perhaps it’s an extreme, shoot-for-Mars bargaining chip by Kenney. It’s certainly one that signals how the would-be premier intends to wield Alberta’s disproportionately large resource-based wealth as a spiked club in Confederation.

Ugly social media posts do in another UCPer

While the past is littered with candidates whose hateful or intolerant posts force them to quit out of embarrassment, UCP’s Eva Kiryakos has quit after pre-emptively airing her apparently racist and transphobic laundry before any media outlet or detractor could. In a Facebook video, the now-former candidate for Calgary–South East says: “Someone outside of our party has been threatening to smear me.” She defends retweeting a post from the blog Creeping Sharia inflammatorily alleging a “migrant rape crisis” in Germany (here’s an good article unpacking that panic), and another of her own tweet in which she disparages transgender individuals. Shortly after the announcement, Postmedia reported on other Kiryakos posts that are intolerant of Muslims and gay-straight alliances.

This comes a week after a Calgary Conservative leaked another now-former UCP candidate’s private messages to the NDP-friendly Broadbent Institute’s PressProgress website. Kiryakos may be a victim of political civil war, too: a source confirmed to Maclean’s that Conservatives had been circulating these and other unseemly social media posts by Kiryakos. And who was Kiryakos’ UCP nomination contestant before he withdrew? Cam Davies, the former campaign manager to UCP leadership candidate before he blew the whistle on the “kamikaze” candidacy.

The newest scandal hands the NDP more fodder for one of their key campaign arguments: Kenney’s party is too extreme and intolerant to govern a modern province. (Calgary Herald)

Danielle Smith, the former Wildrose leader who almost won the 2012 election, has returned to her journalism roots as radio host and sometimes columnist. In this piece, Smith states Jason Kenney is the choice of Albertans who revere former premier Ralph Klein, the populist and pugnacious deficit-slasher, while NDP’s Rachel Notley hearkens back to another iconic Tory premier—Peter Lougheed, the patrician Red Tory who invested heavily in Alberta’s culture and infrastructure, and intervened to stoke the economy. Smith here breaks from her conservative commentary brethren, who tend to simply decry Notley as socialist. “I think most Albertans have been shocked to see how pragmatic she has governed, particularly as it concerns natural resources,” Smith writes.

Notley herself repeatedly invokes Lougheed’s name, and at her campaign kickoff made a point of wearing Tory blue instead of NDP orange. Kenney talks about restoring the “Alberta advantage,” Klein’s old marketing slogan. Smith reasons that Albertans are torn as to which approach they wish to revive. “They want all the spending and Heritage Fund investment of the Lougheed era, all the low taxes and debt repayment of the Klein era. Trouble is, we can’t have both. (Calgary Herald)

NDP in Calgary: better organized but worse off?

Last election, NDP candidate Kathleen Ganley was an unknown lawyer who ran her campaign out of her station wagon, with no campaign manager and a rival who outspent her 30 to 1—and she won. This time, she’s Alberta’s attorney-general, has a well-staffed campaign office and a decent war chest, and may lose her Calgary seat to a last-second fill-in candidate. The NDP used to have negligible organization in Calgary’s largest city, but won most of the city’s seats regardless in 2015, as voters were drawn to Notley’s personal magnetism (and repelled from the Tories) without needing a push. This time, many Calgary NDP incumbents will run proper, full-throttle campaigns, but they’re so far back in the polls in the traditionally conservative city it might not matter, unless Notley can lift them once again. UCP intends to sweep the city; NDP insiders express hopes in at least three core seats—Ganley’s (Calgary–Mountain View), finance minister Joe Ceci’s downtown (Calgary–Buffalo) and the one by University of Calgary (Calgary–Varsity). (CBC)