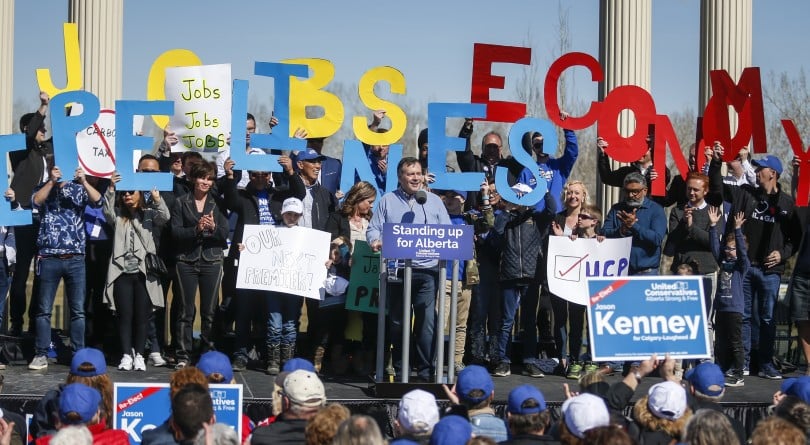 The United Conservatives bundled their long-awaited greenhouse emissions strategy in their full platform release Saturday, potentially shaping the future of Canada’s overall climate-change strategy. It turns out that “How will Jason Kenney replace Alberta’s carbon tax?” was the wrong question to ask.

That’s because the answer is he won’t. A Premier Kenney would simply erase the provincial levy on fuels, plus he’d end efficiency incentives. What Kenney did replace is Alberta’s emissions plan for major oil producers and other large industrial emitters; their program was always separate from the carbon tax. This Kenney regime, too, is clearly weaker. It’s designed to let Alberta oil players compete better with U.S. jurisdictions without strong carbon rules. It drops to from $30/tonne to $20/tonne the pollution fee paid by underperforming plants and oil sands operators, from $30/tonne currently. It also gives more free emissions credits to those who were the biggest polluters to begin with, rolling back the clock to the plan that existed before Notley was premier.

The lower industrial emitters’ penalty means less money for green technology innovations. Kenney would also scrap Rachel Notley’s 100-megatonne cap on oil sands emissions, end renewable electricity subsidies and let coal power plants operate past 2030—though those generators would face many of the same higher clean-energy standards and penalties as they do under the NDP. It’s all a recipe for less action on climate change, though United Conservatives officials claim, without showing calculations, that their strategy would produce only seven megatonnes fewer CO2 reductions than the NDP plan.

The plan sets up obvious confrontations with the Trudeau government, which as of Monday imposes a federal carbon tax on provinces lacking their own comparable plan. Liberals in Ottawa also supported the Trans Mountain pipeline expansion based on the strength of Notley’s climate plan, although now that the government owns the project they may be less likely to mothball it—yet pressure inevitably would rise. National public reaction to this Alberta plan may also signal to federal Conservative Leader Andrew Scheer how acceptable it is to replicate Kenney’s plan in his platform this fall.

Kenney’s strategy also has implications for Alberta oil companies who liked to boast to the public and international investors about the province’s environmental regime showing the sector was finally getting serious. Some big firms publicly favoured the carbon tax, in part because it meant the public shared in challenge of reducing emissions. That message would instantly become a tougher sell. A UCP attack ad pillories a 2015 Notley comment that Alberta was the “embarrassing cousin”—she had been referring to the province’s old environmental reputation.

Kenney promises $20 million from his industrial emitters fund would go to his “energy ‘war room’ that will fight fake news and share the truth about Alberta’s resource sector and energy issues.” It won’t be fake news that Alberta’s climate change fight is substantially diminished under a UCP government.

Late last year, Rachel Notley conceded two NDP MLAs were subject of noncriminal sexual misconduct allegations, and that they were investigated and dealt with through “education and instruction.” The two NDP men implicated were never named—the premier said the cone of secrecy was to defend the complainants’ privacy, though it cast a shadow on every male in her caucus. Complainants have never come forward.

In recent days, the UCP has urged their rivals to name the misbehaving politicians. Deputy leader Leela Aheer released a public letter to Notley that asks by name whether one senior MLA is among the two, stemming from a tweet posted and then deleted by a former political aide who also accused Liberal MP Kent Hehr of sexual harassment. The opposition Alberta party called Sunday for better rules on MLA conduct and complaints. Notley is sticking with her previous line of disclosing nothing about the accused parties to protect the privacy of the accusers. With no evidence to name names, this story seems to be in a holding pattern. (We’re not linking to Aheer’s letter due to this lack of evidence.) This has now become a highly partisan issue, if it wasn’t already.

After the UCP has fielded nearly two weeks of questions about allegedly nefarious deeds in Kenney’s leadership bid and the bigoted comments of ex-candidates, the Conservatives clearly wish to drag the NDP into the mud and get Notley on defensive, too, and perhaps deservedly. It could be a sign the UCP isn’t having the cakewalk they expected…

Is the race tightening?

There are hints and murmurs that the NDP have slightly narrowed their gap behind the UCP. We won’t know the definitive answer until some horse-race polls come out, likely later this week. (No new ones have come out since the election was called.) Alberta Labour Federation’s president threw out some jolting numbers about a mere four-point lead for Kenney’s party—down from an average of 15— but it’s likely the sort of polling released to give the impression of great momentum, not to give an accurate state of the race.

It’s an Ekos poll conducted for Unifor, and it only represents a selection of the polling the NDP-friendly union commissioned. One labour official also explained that the poll wasn’t conducted for public release, but to direct union activists where to mobilize support. [CORRECTED]Roughly half of the respondents weren’t a newly randomized sample of Albertans, but a panel drawn from? a previously randomized sample used for an earlier Unifor survey—a less conventional method designed primarily to track changes in support. Mainstreet Research claims the NDP are gaining and now lead in Calgary and Edmonton, but they release data only to subscribers. That firm’s reputation is dismal in Alberta after Mainstreet terribly botched Calgary’s last mayoral race.

The deficit and debt wars

The two main parties both released full platforms on the weekend, each ambitious in its own regard—New Democrats offer bigger new social programs and more infrastructure, while United Conservatives intend to restructure government mightily. Read the Edmonton Journal recaps here and here.

Let’s zero in on balanced budget plans. UCP forecasts their first surplus by 2022-2023, the last year of a four-year mandate, mostly thanks to holding the line on program spending  while the population grows. The NDP forecasts surplus by 2023-2024, with help from a recovering economy, oil-by-rail program and carbon taxation program that all lift revenues.

The NDP still predicts that by the 2022 fiscal year, the provincial debt would be $96 billion, an eye-popping figure by the standards of once-debt-free Alberta, and a number Kenney’s party loves to highlight. While the UCP’s platform doesn’t cite it, officials say the party’s plan estimates something lower, but not by a ton: $86 billion by 2022.

A debate, and the premier reluctantly signs on.

As if this Alberta campaign isn’t weird enough… late Friday, a media consortium announced a televised leader’s debate in Edmonton for Thursday, April 4. Confirmed guests: leaders of the UCP, Alberta Party and Liberals, and someone highly important hasn’t signed on yet. The NDP camp was holding out, because it felt Freedom Conservative Party Leader Derek Fildebrandt should get in too, as a sitting MLA. The media consortium invited leaders based on whether MLAs have been elected under their party banner, which excludes former Wildrose/UCP member Fildebrant. Notley’s gambit was plain: she wanted a leader who can bash Kenney from his right flank. Sunday evening, with days to go before the election’s lone debate, the consortium announced the NDP leader agreed to debate Thursday, with the four elected leaders. Having lost this tussle, NDP is now publicly calling for a Notley-Kenney head-to-head debate, which the UCP will undoubtedly refuse. Notley emerged from the 2015 election debate as clear winner—when she and Wildrose leader Brian Jean could box in Tory premier Jim Prentice—but she’s on shakier footing coming into this one.

Jen Gerson on why it’s too soon to call it a coronation: “Against those odds, Jason Kenney’s United Conservative Party could very well lose this election. Alberta’s recent political history is volatile, and the UCP’s performance in the opening days of the writ period haven’t inspired much confidence in an easy win.” (Globe and Mail)

Chris Nelson on NDP promises: “No one seems to ask: how do we afford this? Maybe we’ve lost that ability to be skeptical. And you’ve got to hand it to Notley: she looks re-energized. Promising yet more stuff with oodles of borrowed bucks is like watching Dracula at an all-you-can-drink night at the local blood bank.” (Calgary Herald)

Meghan Grant on bid to halt kamikaze candidate probe: “Lawyers for Callaway and the other applicants plan to argue there is “no urgency” to investigate especially given the activities under the OEC microscope happened before the election period. After refusing to adjourn the scheduled interviews with Callaway and members of his team, the OEC replied that ‘enforcement activities … must escalate during an election period.'” (CBC)

Eric Grenier on battleground Calgary: “Draw a Venn diagram of the parts of Alberta the United Conservatives and New Democrats need to win the provincial election on April 16 and the circles will overlap in Calgary.” (CBC)

Janet Dirks on Alberta separatists: “‘I am tired and I believe most Albertans are tired of being treated as a second-class colony,’ said Derek Fildebrandt, the leader of the Freedom Conservative Party of Alberta. So, too, is Dave Bjorkman, the leader of the Alberta Independence Party. The party’s main policy platform is Alberta’s secession from Canada. (CTV)

Gary Mason on Alberta’s voters on edge: “That sense of grievance was palpable in the voices of people I spoke to as I travelled the province recently in an effort to better understand the origins of the alienation and how deeply it runs.” (Globe and Mail)

CLARIFICATION: An earlier version of this post incorrectly stated that the Ekos poll conducted for Unifor did not use a randomized sample. In fact, part of the survey respondents came from a previously randomized sample of Albertans.