Jason Markusoff: A question rang out across Alberta. How the (expletive) does he think he can get away with this? 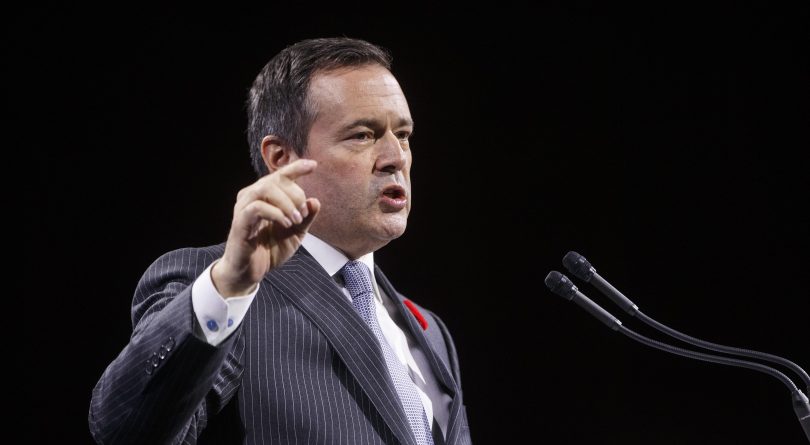 Kenney delivers his State of the Province address to the Edmonton Chamber of Commerce on Oct. 29 (Jason Franson/CP)

A question rang out across Alberta (and beyond) as people learned that Jason Kenney’s government will legislatively turf the elections commissioner who has been aggressively investigating and penalizing United Conservative Party members’ violations of election laws. How the (expletive) does he think he can get away with this?

The effective response from Kenneyland comes in the form of another question. Don’t you remember the election last spring?

That isn’t to say the government takes a to-the-victor-belong-the-spoils approach, though Kenney and colleagues do enjoy smushing their win in the Alberta NDP’s noses at every opportunity.

Rather, it harkens back to the dismissive shrug with which United Conservatives greeted the scandalous revelations that came out about them during the provincial campaign. There was news that Kenney’s side had helped engineer a stalking-horse “kamikaze” candidate in the UCP leadership race to undercut Kenney’s main rival. Then, confirmation that the RCMP were interested in allegations involving Kenney’s own leadership campaign and allegations of voter fraud. “Voters don’t care about that stuff,” Conservatives told me repeatedly last spring. Campaign Kenney was single-mindedly obsessed with promising Alberta a jobs recovery, a brass-knuckle fight for pipelines and toughness against Justin Trudeau’s Ottawa. And it turned out voters shared his obsessions, and weren’t fussed with other trifling matters like political ethics—heck, they were even okay to look the other way when faced with social conservatism in Kenney’s ranks, in some cases more blatant than the sort that appeared to mortally wound Andrew Scheer’s federal campaign in eastern provinces.

Seven months after that Albertan balancing of priorities, the jobs and pipeline files remain stubbornly unresolved, and Trudeau’s re-election exacerbated the grievance. So Kenney must feel that Albertans will overlook further trespasses on other matters, like the many budget cuts and sweeping reforms he’s placed under the banner of deficit reduction. But let’s consider what astonishing act Kenney now banks on the populace ignoring.

Election Commissioner Lorne Gibson, installed by Alberta’s NDP government as an independent officer, was a former Elections Alberta boss who had been fired by the province’s old Tory regime. He’s led a robust investigative outfit, and has levied tens of thousands of dollars in fines on NDP and UCP donors who exceeded contribution limits. He also went after the campaign of Jeff Callaway, the aforementioned stalking horse candidate, for a scheme involving an illicit and massively over-the-limit corporate donation concealed by straw donors’ names—$200,000 in fines later, it’s unclear that investigation is over. Gibson’s office had also been investigating the Kenney campaign for other improprieties, StarMetro Edmonton’s Kieran Leavitt has reported. (It’s worth noting that Team Kenney has not been implicated in the Callaway campaign  investigations, and the kamikaze nonsense seems beyond Gibson’s scope. Furthermore, the RCMP voter fraud probe is a separate ongoing matter.)

In a budget omnibus bill, United Conservatives will fold the election commissioner’s office into Elections Alberta, effectively terminating Gibson once the bill passes. This will not undo the fines, though it does create uncertainty around the future of Callaway’s court challenge that Gibson overstepped his role. Kenney allies say the investigations can all proceed under the Elections Alberta tent, and its leader could even rehire Gibson if he chose.

This all appears true. It’s also true that if Donald Trump had had the chutzpah to fire special prosecutor Robert Mueller, his probe would have still continued under somebody else’s guidance. Spend enough time in this business watching ethics commissioners and auditors-general, and you learn quickly that the director of these watchdog office matters a great deal, setting a different pace and level of assertiveness. Certainly, there was a history of passive watchdogs in Alberta’s one-party state past. Kenney’s side has shown no love for the dogged Gibson, and has found the right post-federal-election omnibus bill clauses to take care of that problem.

Meanwhile, Jason Kenney has shown a yen for holding wrongdoers to account, and perceives the public is behind him—if they’re the wrongdoers Kenney wants to pursue. He has dedicated $2 million to a public inquiry into the foreign funding sources of environmental activism, though his inquiry head has stumbled into ethics quagmires of his own. And there’s $30 million for the energy “war room” that will respond to and counterprogram environmental advocacy and journalism the new body deems “misinformation.” The UCP government said its elections commission move also comes in the name of deficit-fighting, and will save $200,000 a year—or roughly 2½ days’ worth of this dubious war room’s operating budget.

Yes, jobs are still scarce, Trans Mountain pipeline construction is in its still-uncertain infancy, and someone named Trudeau is still Prime Minister and chooses his cabinet Wednesday. But if Albertans give Kenney a pass on this strongman maneuver, they’ve signalled that he can get away with pretty much anything.

RELATED: What a ‘kamikaze’ mission reveals about Jason Kenney

RELATED: Why Jason Kenney’s proposed referendum is so puzzling

RELATED: Jason Kenney does for the federal Tories what Doug Ford can’t