Jean Charest will reportedly run for the Conservative leadership 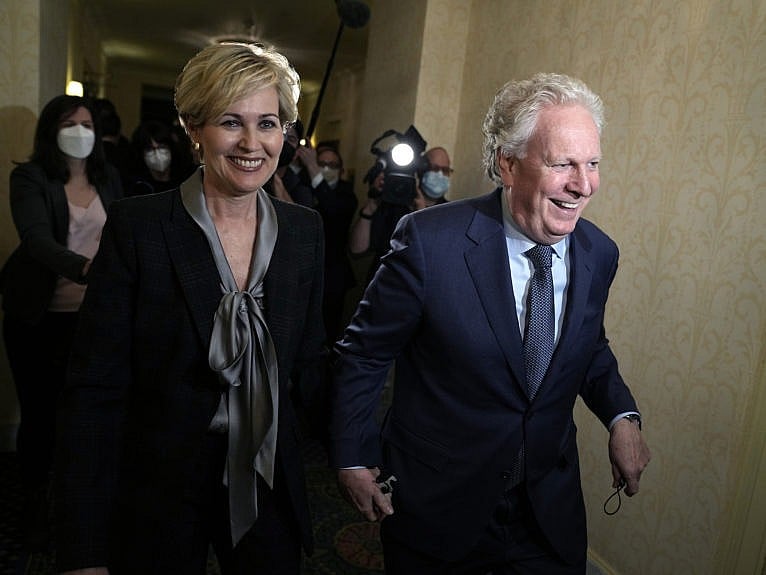 Jean Charest will announce his candidacy for the CPC on Thursday, sources tell Radio Canada. Bob Fife has a copy of the invitation to the launch. It will be in Calgary.

Kheiriddin out: Earlier Monday, journalist Tasha Kheiriddin, who had been considering a run, announced that she would instead throw her support behind Charest. The Post, where she used to columnize, has the story.

Pierre Poilievre, widely seen as the odds-on favourite, is unlikely to welcome Charest, who he attacked on Twitter on Monday. CP has a good roundup of the state of the race.

Baggage: In Le Journal de Montréal, Richard Martineau reminds readers that while Charest was premier of Quebec, there was an “unhealthy promiscuity” between Liberals and certain big-spending engineering firms (translation).

Lurking? In the Star, Stephanie Levitz takes an in-depth look at the personal dynamics at play in the CPC race, including the role that a certain former prime minister may play.

Former party leader and Conservative prime minister Stephen Harper, for instance, has been sending signals he’s not willing to take a back seat if former Progressive Conservative leader Jean Charest runs. The two interacted often when Harper was prime minister and Charest was premier of Quebec, where he harshly criticized Harper often and in particular, during the 2008 election in which the federal Conservatives again failed to secure a majority. How exactly Harper will engage in this leadership contest is unclear, two sources close to him told the Star, but what is certain, they said, is that he will be motivated by a desire to ensure a “true Conservative” wins.

Pressure for defence spending: In London on Monday, at the start of a five-day European trip to support Ukraine, Justin Trudeau defended Canada’s low level of defence spending, acknowledging the “context is changing rapidly around the world,” the Globe reports.

Trudeau made his comments at a joint press conference with with Boris Johnson and Dutch Prime Minister Mark Rutte.

The North Atlantic Treaty Organization has a defence spending target of 2 per cent of GDP for its 30 member countries. Canada lags the vast majority, placing fifth-last in defence spending at 1.39 per cent of GDP, as of 2021, according to NATO estimates. Britain spent 2.29 per cent of GDP on defence last year, according to the same estimates. Mr. Johnson said he wouldn’t comment on Canada’s military budget but noted that Britain’s is much higher. “I’m not going to make any comment on Canada’s approach except to say this: I do think that the world has clearly changed. And I think that what we can’t do post the invasion of Ukraine is assume that we can go back to a kind of status quo.”

Russian oil: Trudeau, Johnson and Rutte were also asked about replacing Russian petroleum, the Post reports. Conservative critics have blamed Trudeau for making it more difficult to build pipelines to export Canadian petroleum, and called for Canadian products to be exported to replace Russian petroleum. In his remarks, Trudeau emphasized alternatives to oil: “We will be there to support, as the world moves beyond Russian oil and indeed, beyond fossil fuels, to have more renewables in our mix.”

Latvian market? The ambassador from Latvia said Monday he would welcome Canadian LNG, the Globe reports.

Wheat up: Canadians may be spending more for groceries as a result of the war in Ukraine, the Post reports. The war has “disrupted grain exports from the Black Sea region, putting stark upward pressures on wheat, corn, sunflower seeds, and legumes like pulses.”

Out on bail: Convoy organizer Tamara Lich got bail on Monday, CTV reports. Lich was released on $25,000 in bonds and must leave Ottawa within 24 hours and Ontario within 72 hours. Lich, who has been locked up since Feb. 17, is charged with counselling to commit mischief.

Kenney cuts gas tax: Jason Kenney announced Monday that the province would drop its 13-cents-a-litre gas tax. In the Herald, Don Braid explains that he can afford to do that.

Almost singlehandedly, the oil surge erased last year’s original estimate of an $18-billion deficit, turning it into a balanced budget with an estimated $500 million surplus. That’s with this year’s oil price estimated at $70 per barrel. At the current WTI level of nearly $120 — fully $50 above the estimate — the province can expect an extra $25 billion to pile up on top of the balanced budget, should that price persist for a year.