Jim Flaherty: A death in the family

The House of Commons comes together to mourn 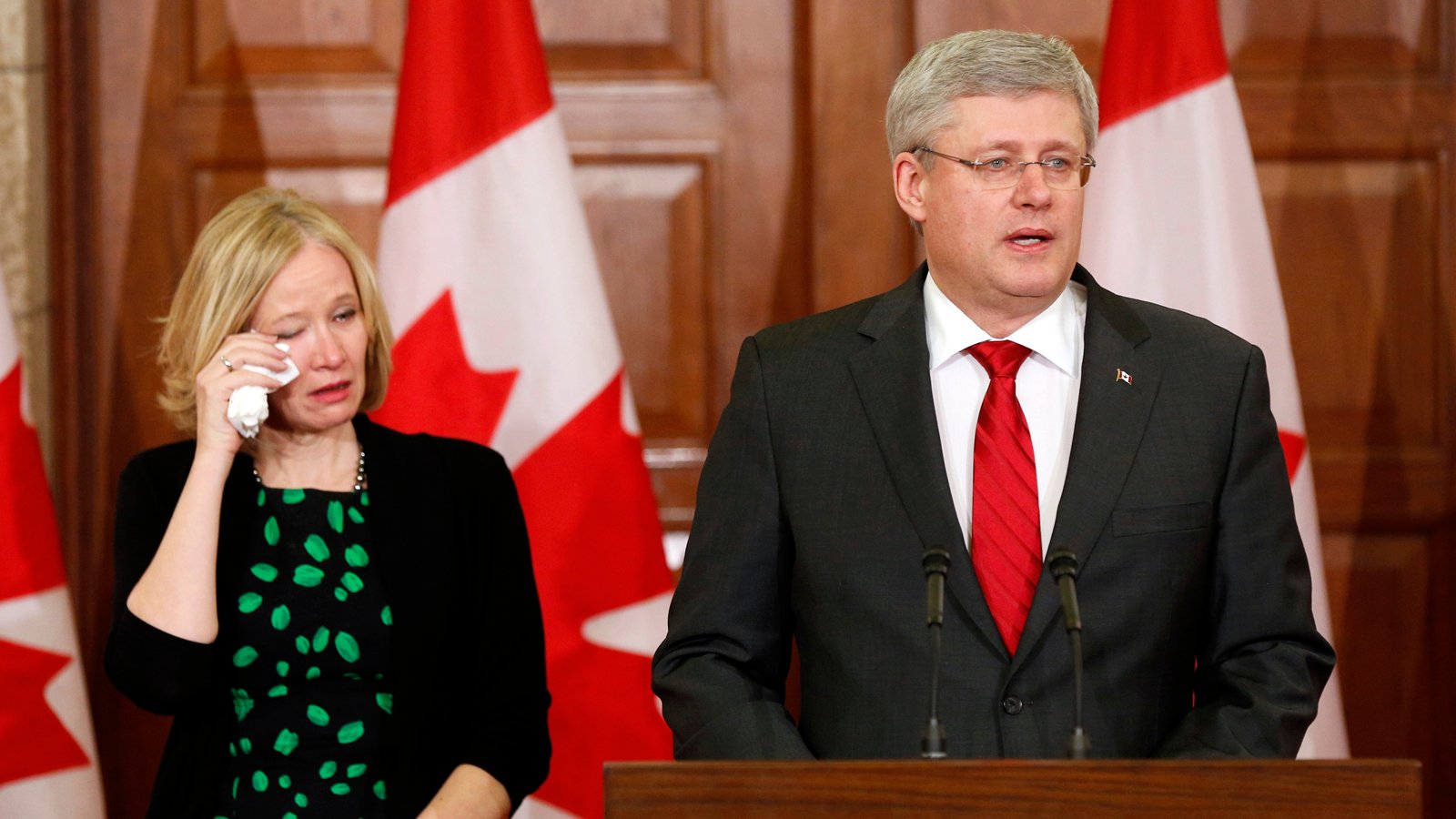 Around the time at which they might otherwise have been expected to be scorning each other’s positions on the Fair Elections Act, NDP MP Alexandrine Latendresse and Pierre Poilievre, the minister for democratic reform, hugged. Mr. Poilievre rubbed Ms. Latendresse’s back and then they stood there for a moment, holding each other’s hands.

As the House of Commons had neared its daily allotted time for recrimination and carrying on, the Speaker stood and announced that, after consultation with House leaders, the decision had been made to suspend business. And now the members of the House stood around talking and commiserating and comforting, teary-eyed and stricken and empathetic. An NDP MP she approached Conservative MP Randy Hoback, spreading her arms wide to embrace him. Environment Minister Leona Aglukkaq and NDP deputy leader Megan Leslie stood together and chatted, as did Justice Minister Peter MacKay and NDP foreign affairs critic Paul Dewar. NDP MP Eve Peclet and Conservative backbencher Wladyslaw Lizon embraced.

The Speaker stood again, this time to announce that the House would adjourn until tomorrow morning, but many of the assembled members lingered as the sergeant-at-arms carried the ceremonial mace away. Mr. MacKay looked up towards the stained glass of east wall. Conservatives Jeff Watson and Gary Goodyear shared a long hug. Ms. Latendresse hugged Conservative MP Peter Braid and rubbed his arm.

Jim Flaherty was dead and this family was in mourning.

As on any other day, the press gallery had gathered in the foyer and MPs emerged to comment for the cameras and microphones.

“Jim Flaherty gave his all to public life,” offered Scott Brison, a sparring partner of Mr. Flaherty’s as Liberal finance critic. “And you could differ with him, but you never, ever doubted his absolute commitment to serving the people of Canada.”

NDP leader Thomas Mulcair stood at the microphone, hands folded in front of him, an audible lump in his throat. “Catherine and I want to express to Christine Elliott our profound sadness at the departure of our friend Jim Flaherty,” Mr. Mulcair said of Mr. Flaherty’s wife, an MPP in Ontario. “All his colleagues here in the House of Commons share in that loss. He’s a good person.”

Peggy Nash, until recently the NDP’s finance critic, approached the microphone awhile later and sighed heavily. “I think a lot of us felt that Jim Flaherty, when he left this place, he would finally get a bit of time to himself and that he would take things easy a bit more,” she said, not quite finishing the thought.

Down the hall, in Centre Block’s lovely Reading Room, Conservative MPs had gathered together, seated in rows, to hear from the Prime Minister, the press gallery filling in behind them. At the front of room, flanked by an alternating array of Canadian and Peruvian flags, was set up a table with two chairs and two pens, meant for the ceremonial signing of bilateral agreements on the occasion of the state visit of Peru’s president. Aides eventually approached to pocket the pens and move the table and chairs aside, and what seemed to be the Peruvian delegation took its leave.

Seated beside each other, Diane Ablonczy and Diane Finley rested their heads together, Ms. Ablonczy’s arm around Ms. Finley’s shoulders. Labour Minister Kellie Leitch arrived red-faced and teary and took a seat beside Transport Minister Denis Lebel, who rubbed her back. Revenue Minister Kerry-Lynne Findlay approached to comfort Ms. Leitch and Mr. Lebel gave Ms. Findlay his seat. Ms. Ablonczy passed over some tissue and James Moore and Gary Goodyear approached to hug Ms. Leitch, the cameras at the back of the room clicking away at the scene. Ms. Finley held her hand to her mouth. A box of Kleenex was passed around one end of the room from MP to MP.

Seemingly after everyone had been gathered, a young man entered the room, approached the lectern at the front and laid upon it an open binder bearing the Prime Minister’s remarks. A minute later, the Prime Minister arrived, hand in hand with his wife, his caucus rising to stand as he appeared, then quietly returning to their seats. Here Mr. Harper, his wife sobbing beside him, would make the official public announcement of Mr. Flaherty’s death.

“Dear friends, today is a very sad day for me, for our government and for all of our country. I learned a short while ago that our colleague, my partner and my friend Jim Flaherty has passed away suddenly today,” he said, seeming to struggle with the words that confirmed his friend’s death.

When the Prime Minister finished, the caucus silently returned to its collective feet, Mr. Harper walking forward to hug Ms. Leitch and then Ms. Findlay.

The press gallery, asked to give the room to Mr. Flaherty’s colleagues to gather privately, waited in the hall for anyone who was willing to offer a word.

“He’d work 24 hours a day, seven days a week and he still had time to show up to my birthday party,” Gary Goodyear said when a reporter asked him about his relationship with Mr. Flaherty. “That’s what kind of a guy he was.”

A Toronto Star reporter asked Rick Dykstra about all Mr. Flaherty had given to this business. “You know, the first thing you do is reflect on these things and what’s important to you and, you know, we all, you guys are the same in this, we all have jobs to do, we’re all under a lot of pressure and there are times, I think, when we all just have to take a couple of steps back and remember who we are, where we came from and what our commitments are,” offered Mr. Dykstra. “His commitment, from day one, was always, obviously, to his family, but to his community and, to the great aspect, to his country.”

Awhile later, back in the foyer, Jason Kenney, stumbling with his words, said he was still trying to come to terms with the news and Jeff Watson, the Conservative MP, stood alone in front of a television, watching the CBC report the news.

Liberal deputy leader Ralph Goodale remarked for a television camera at how remarkably Mr. Flaherty’s death had brought everyone together. Had he ever seen anything like it? He recalled the passing of Jack Layton—though Parliament was not in session then—and the day that Shaughnessy Cohen collapsed on the floor of the House.

“I think it’s moments of that kind that remind people that there are some things that are deeper and more profound than some of the hurly-burly of political life from day to day,” Mr. Goodale said. “And the unity within the House at 2:15 was truly extraordinary. Which I think speaks volumes about Jim Flaherty the human being.”