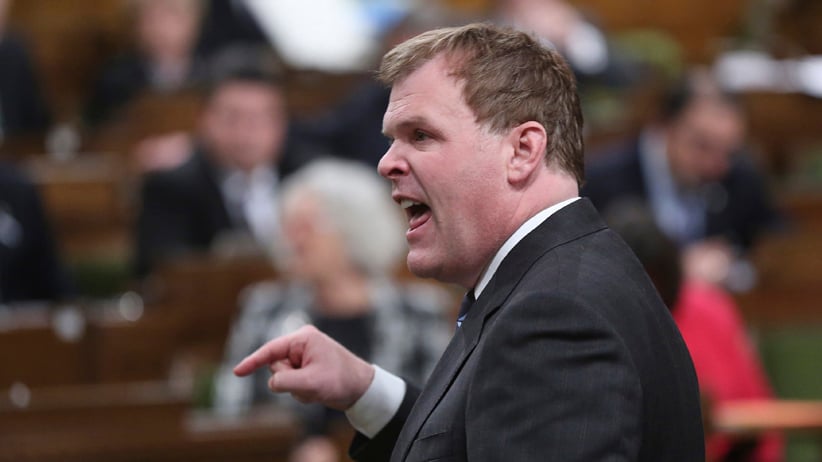 John Baird, the shouty face of official retort, a man periodically likened to a vicious canine, smiled across the aisle at the Opposition as he bid his adieu from the great stage. A decent number of opposition MPs had turned out, and they stood to applaud when he stood to make his statement. When he recalled that, as a young politician, he had been “driven by ideology and defined by partisanship,” there were groans of mock protest from the other side.

Later, he said, “I will miss this place very much, and many of the people in it, on all sides.”

These little ceremonies of farewell are typically the scene of goodwill and graciousness, almost so much so, you want to question how these people comport themselves when they’re not toasting each other. But Baird has particularly come to defy easy caricature.

On the same day five years ago that he was at the centre of a semi-famous spectacle at the operations and estimates committee (Baird loudly asserting his right to show up and submit a point order), he was toasted as the best MP by a vote of his peers. In the citation for that award, he was lauded as a charming man capable of working with his counterparts in other parties. Similar things were said about Jim Flaherty after the former finance minister’s passing, but the dichotomy with Baird was more pronounced: a man who would happily (and loudly) heckle in the midst of question period and chat happily with someone on the other side before or after.

“Some ministers can be treated like pinatas,” he told this magazine in 2008. “I’m not a pinata. I’m not just going to sit there while you whack me repeatedly. And I give as good as I get.” That same year, there was a discomfiting moment when he talked of the government going over the governor general’s head to counter a coalition.

But, since becoming Foreign Affairs minister, he has publicly thanked and commended Liberal MP Irwin Cotler. Baird was the adult in the room—actually offering straightforward responses—when the House dealt with the question of Islamic State last fall. Before that, he’d taken his New Democrat and Liberal critics with him to Iraq. When he led the debate on military intervention, he appealed to everyone’s better angels and, in that speech, he praised the “principled” objection of Green Party Leader Elizabeth May. And when the government side moved a motion of time allocation to limit that debate, Baird stood in the House and made a plea for greater cooperation.

“Mr. Speaker, it might surprise the member opposite, but I share his concern,” he told the NDP’s Peter Julian. “I wish there could be better collaboration between the government and the opposition, and the opposition and the government. When I say ‘opposition,’ I mean all members, whether Independent, Green, Liberal or New Democratic. It is unfortunate that these things cannot be dealt with. The fact that it has risen to such a level speaks just as much about the official Opposition as it does about the government.”

Appearing last week before a House committee to discuss the mission in Iraq, he made a plea for a constructive dialogue. And it is tempting to believe he actually desired that.

In bidding farewell, he appealed to the honour of this chamber and its proceedings.

“To all of my friends in this place, for a Canadian, there is nothing more meaningful, nothing more special than to sit in these benches of this sacred House and to serve with all of you. I am grateful to you for your friendship, for your counsel and for your wisdom,” he said. “John Diefenbaker once said, ‘Parliament is more than a procedure, it is the custodian of the nation’s freedom.’ Mr. Speaker, there is no greater honour for a Canadian than to serve in this place, no greater honour to serve the people who placed their trust in you.”

He said he was “saddened” to leave this place and that seems indisputably likely. Possibly no one seemed to enjoy being here between 2 and 3 o’clock each afternoon as much as Baird did, and one imagines he might struggle now without that outlet. Perhaps, as Stanley Knowles was made an officer of the House when he stepped down as an MP, Baird could be given a seat at the table in the centre aisle as a sort of designated chider. (“He did not always make my job in the Chair easy, and members will miss his perambulations around the chamber during question period and other debates,” Speaker Andrew Scheer offered after Paul Dewar, Marc Garneau and Elizabeth May had offered their best wishes.)

Bob Rae, another veteran of the provincial and federal legislatures, another who was first elected as a young man, greeted Baird’s exit with a note of admiration and a series of adjectives, the latter running the gamut from flattering (“generous”)to rather harsh (“mean spirited”. When Rae left this place, it was Baird who rose on the government side to toast him—a gracious and seriously approached speech.

In defying easy caricature, Baird is not unlike the institution he enjoyed. We needn’t condone its worst excesses, but we would be wrong to glibly reduce or condemn it.