After a final count of votes, the B.C. NDP won a clear majority government. Here's a look at where the party made gains—and at whose expense. 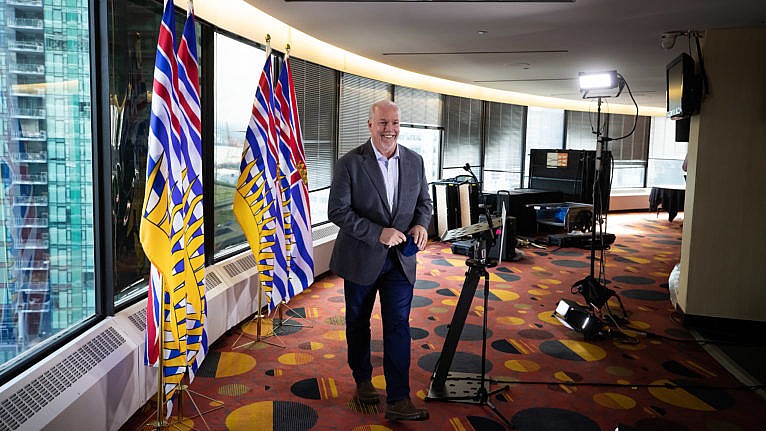 Pandemic elections sometimes come with big, temporary caveats that bear mentioning before almost anything else. In British Columbia, John Horgan’s New Democrats won a comfortable, predictable majority government on Oct. 24 after a snap election call. Nobody believed that thousands of uncounted mail-in ballots would change the basic outcome. Pre-election polling predicted those late-comers would lean heavily to the NDP, which could flip a couple of tightly contested ridings.

And those final votes did swing two more ridings to the NDP. Horgan’s win was even more decisive. The NDP flipped 15 Liberal ridings and swiped another from the Greens. Thanks to a provincial parsing of 2016 federal census data, we know the party dominated districts with high immigrant populations and wiped the floor in the ridings with the longest commutes. These 10 charts, which we’ll update after the final results are released, explain where Horgan’s team made the most gains—in more detail than “in a whole lot of places.”

This post was updated on Nov. 9 to reflect the final vote count in B.C.

These ridings swung from the Liberals to NDP

Where the Liberal vote plummeted most, in three ridings east of Vancouver, the centre-right party might still have won if not for Conservative and independent challengers. Jason Lum, a Chilliwack city councillor and chair of the Fraser Valley Regional District who ran as an independent in Chilliwack-Kent, ran a competitive third after increasing the riding’s “other” vote by more than 25 per cent. The Liberal incumbent, Laurie Throness, trailed the NDP’s Kelli Paddon. In the neighbouring Chilliwack riding, Conservative Diane Janzen (a former Liberal) charged into third place. And in Langley-East, another Conservative named Ryan Warawa—the son of the late Tory MP Mark Warawa—also managed to increase his party’s vote share.

This chart shows how every major party’s share of the vote shifted between 2017 and 2020 in ridings that flipped from the Liberals to NDP.

The five ridings where the Green vote dropped most

It’s no secret the NDP wanted to capitalize on strong polling numbers and trounce the Green Party that had, for three years, helped the New Democrats remain in power. And in the five ridings where the Green vote dropped the most from one election to another, the NDP was the clear beneficiary. In Oak Bay-Gordon Head, a Victoria-area riding on Vancouver Island, former NDP MP Murray Rankin made a successful political comeback—and has so far scooped up almost every vote shed by the Greens. The third party’s poor showing also contributed to a possible NDP pickup in the interior riding of Boundary-Similkameen.

The vote shift in immigrant communities

In the corners of the province where the fewest residents are immigrants, there was virtually no movement between elections. But the NDP flipped nine ridings where the immigrant population ranged between 10 and 25 per cent, and seven more where immigrants comprised more than one-quarter of residents. Horgan’s team capitalized on Green losses in three suburban Richmond ridings that were close contests in 2017. (Note: these preliminary results do not reflect how immigrant communities voted, but simply illustrates the trend in ridings with the most immigrants.)

The vote shift in Indigenous communities

Maybe New Democrats hope three years of work on reconciliation initiatives might ingratiate them to Indigenous voters. But preliminary results indicate that ridings with the most Indigenous residents did not shift en masse to the party. That might have something to do with the government’s approval of the controversial Site C hydroelectric dam, or the premier’s handling of Wet’suwet’en opposition to the Coastal GasLink pipeline. Either way, the vast majority of the NDP’s gains appear to be in ridings with the fewest Indigenous residents.

The vote shift where commutes are longest

When city-dwellers think of communities with tiny commutes, they might envision inner-city neighbourhoods where people can walk to work. But short drives to work are commonplace outside of major urban centres, too, where Liberals typically perform well. The trail the NDP, 10-9, in the ridings with the lowest proportion of 60-minute commutes. New Democrats made gains in cities with the longest commutes, including Surrey, Langley and Chilliwack.

The vote shift where the fewest car-commuters live

The election results have so far not turned on how many residents walk, cycle or take public transit to work rather than driving. No matter the proportion—under 10 per cent or over 30 per cent—Horgan’s NDP made gains. In the former Liberal stronghold of Parksville-Qualicum on Vancouver Island, where 9.32 per cent of residents don’t drive to work, Adam Walker maintained a 6.5-point lead over two-term MLA Michelle Stilwell. And in Vancouver-False Creek, a downtown riding where a stunning 65.68 per cent of residents walk, cycle or jump on transit, Brenda Bailey beat former mayor and two-term Liberal Sam Sullivan by nine points.