Kerry says he is "deeply concerned" about the situation in Venezuela 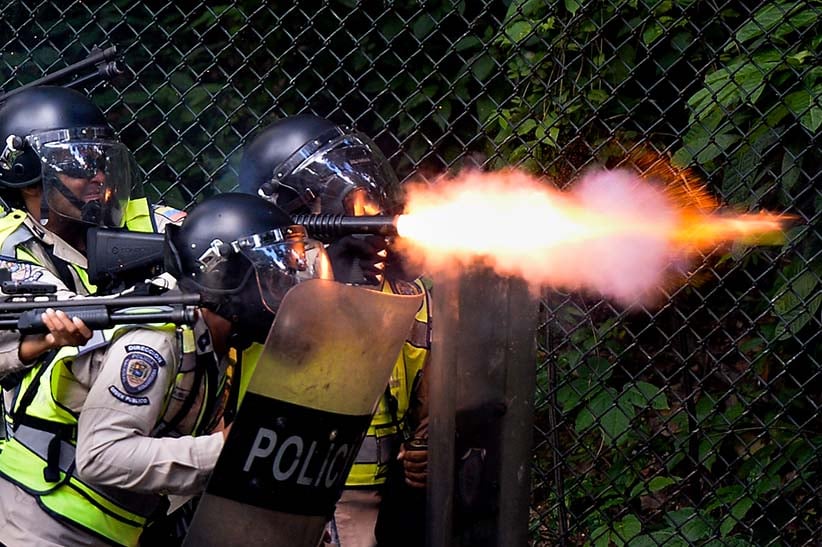 Riot police fire rubber bullets and tear gas grenades at students from the public Central University of Venezuela who demonstrate in demand of a referendum on removing President Nicolas Maduro in Caracas on June 9, 2016. (Federico Parra/AFP/Getty Images)

CARTAGENA, Colombia — Secretary of State John Kerry said Monday that he is “deeply concerned” about escalating political tensions in Venezuela as he held his first official meeting with Venezuelan President Nicolas Maduro.

The two met in Cartagena, Colombia, following the signing of Colombia’s historic peace agreement between the Colombian government and rebels with the Revolutionary Armed Forces of Colombia, or FARC.

“We’re very, very concerned for the people of Venezuela, for the level of conflict, starvation, lack of medicine,” Kerry told reporters ahead of the meeting. “The humanitarian situation is of enormous concern.”

Leading opposition politicians in Venezuela are demanding to hold a complex recall process on whether to cut short Maduro’s term before it ends in 2019. Venezuela’s opposition vowed Monday to press forward with its bid to recall Maduro this year and promised street demonstrations should the government continue to stymie the vote.

Opposition leaders spent most of the weekend holed up in a posh hotel debating how to respond to elections officials torpedoing what has been their main political effort — ousting Maduro and holding new elections.

Venezuela’s professional class that makes up the bedrock of the opposition’s support is eager for a quick response. Anti-Maduro candidates swept legislative elections in December in the biggest defeat yet for the movement started by the late Hugo Chavez, but they have been outmanoeuvred ever since with their legislation blocked by the government-stacked supreme court.

The economy has only gone further into its tailspin as the price of oil remains low. Many basic foodstuffs and medicines have become impossible to find without turning to the black market, driving Maduro’s approval ratings down to a nine-month low of 21 per cent.

Kerry said delays to the recall have been “problematic,” and said there needs to be “a way forward that can provide a consensus that provides relief to a nation under siege.”

“We’re not looking for conflict,” he added. “We’re looking for a solution here that works for the people of Venezuela writ broadly.”