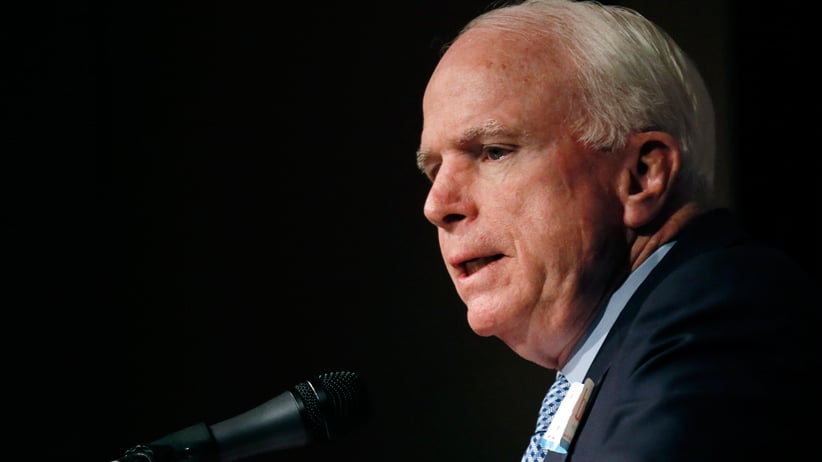 The six-term Republican senator from Arizona made the remarks after receiving the award for a lifetime of service and sacrifice to the country. In addition to recalling his more than two decades of Navy service and his imprisonment in a Vietnam prisoner of war camp, McCain took a moment to go a step further than the night’s other speakers, who lamented what many described as a fractured political climate.

RELATED: Nations ponder how to deal with Trump’s ‘withdrawal doctrine’

“To abandon the ideals we have advanced around the globe, to refuse the obligations of international leadership for the sake of some half-baked, spurious nationalism cooked up by people who would rather find scapegoats than solve problems,” he said, “is as unpatriotic as an attachment to any other tired dogma of the past that Americans consigned to the ash heap of history.”

He continued: “We live in a land made of ideals, not blood and soil.”

None of the speakers, who included former Vice-President Joe Biden, mentioned any current or former government officials during their remarks. But many referenced a time when bipartisanship – namely, the friendship between McCain and the Democrat Biden – wasn’t out of the ordinary.

RELATED: Donald Trump and our crisis of loneliness

“We often argued – sometimes passionately,” McCain said of himself and the former vice-president. “But we believed in each other’s patriotism and the sincerity of each other’s convictions. We believed in the institution we were privileged to serve in.”

McCain joined the Navy in 1958 and rose to the rank of captain during his 22 years of service. In 1967, his plane was shot down over Hanoi, Vietnam, during a bombing mission, and he spent years in a Vietnamese prisoner of war camp. He recently revealed that he’s fighting brain cancer.