A small matter of procedure at a time of war 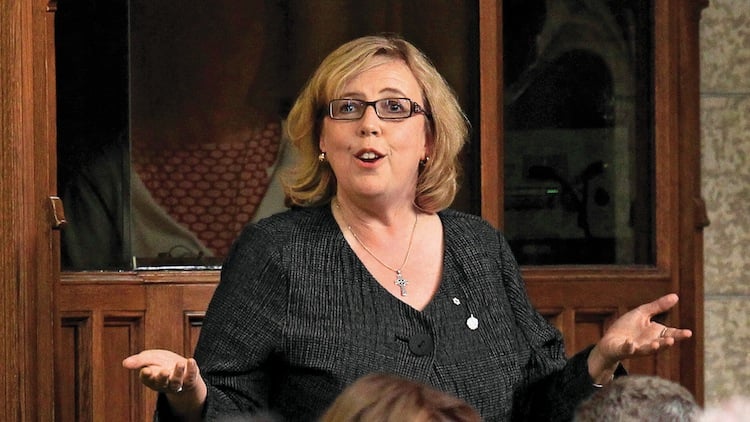 My colleagues Paul, John and Michael have ably covered this morning’s speeches from Prime Minister Stephen Harper, NDP Leader Thomas Mulcair and Liberal Leader Justin Trudeau and the latest prospect of war, so let’s deal with a minor point of House procedure.

When the Prime Minister stood to address the House this morning, he did so according to the time allowed each day for statements by ministers. (In an ideal world, this time might be regularly used for ministers to make announcements of government policy or business, but mostly, the allotted time is only ever used when there’s something to commemorate or there is a military mission to announce.) By standing order, a minister is permitted to make a “short factual announcement or statement of government policy” and a member of each party in opposition is entitled to respond.

In the abstract, that’s not an unreasonable rule. But here is where Green Party Leader Elizabeth May’s involvement can become an issue. Because May, whatever her status as a party leader, is not the member of an officially recognized party in the House—that is, a party with a caucus of at least 12 members—she is not entitled to an opportunity to respond. She can thus only speak during this time if she receives the House’s unanimous consent to do so. (There is no recorded vote in this regard. The Speaker simply asks if there is unanimous consent, then listens to hear whether anyone says an audible “no.”)

So today, after Harper, Mulcair and Trudeau had had their respective says, May stood and asked for the unanimous consent of the House to make a statement. That consent was denied, seemingly by the voices of Conservative MPs.

This was a thing at the beginning of the 41st Parliament. In November 2011, May was twice denied the opportunity to make a statement on the occasion of Remembrance Day. Three months later, she was denied a chance to pay tribute to Vaclav Havel.

But by November 2012, both May and Louis Plamondon of the Bloc Québécois were able to officially mark Remembrance Day. And a year later, May was given the opportunity to commemorate Nelson Mandela. Last October, when the Prime Minister announced the first motion on the war against Islamic State, May was given unanimous consent to respond. When the House reconvened on Oct. 23 after the attack of the day before, there were statements from May, Plamondon, Jean-Francois Fortin of Forces et Démocratie and Independent MP Maria Mourani. And May was able to make a statement on Remembrance Day in November.

If the time allowed for statements by ministers were regularly used by ministers to make announcements to the House—if ministers dared eschew camera-friendly photo ops to face the House on the occasion of a new policy or bill—and if May and other MPs not aligned with a recognized party were regularly demanding a chance to respond to those regular statements, there might be reasonable grounds to insist on a strict enforcement of the rules here. As it is, the House is merely being asked to periodically allow a few minutes for an MP who does not enjoy the debate and committee privileges of party status to make a speech in a place that we specifically built and maintain for people to make speeches.

I can imagine that in moments like today’s, there might be some reflexive objection to a request by someone from outside your own tribe, and perhaps that’s all that blocked May today. It would otherwise seem that the House had come to accept her inclusion as basically standard practice. But whatever the actual reason for anyone’s audible objection, it seems petty and rather unnecessary to deny the request. Indeed, it really only gives May and others a chance to publicly lament your churlishness.

This is almost definitely the smallest matter that could possibly be debated, as the House of Commons confronts the question of war, so possibly, it could be unanimously agreed to let this one go from now on.

FILED UNDER: Elizabeth May house of commons Iraq