'Our commitment is as strong as ever,' says Wilson-Raybould 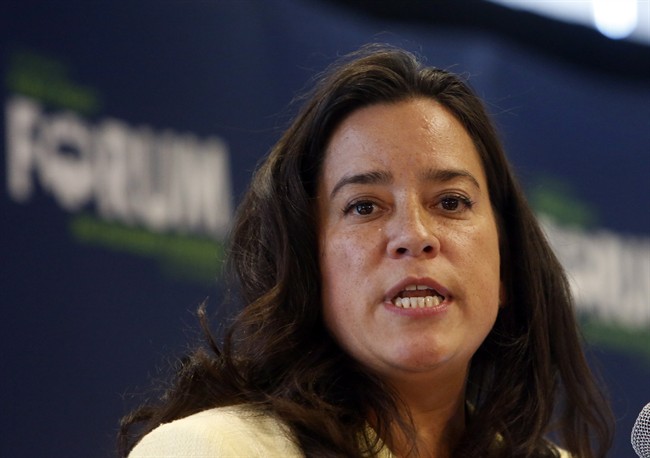 OTTAWA – The federal Liberals remain fully committed to legal and policy reforms for indigenous people, Canada’s justice minister said Wednesday as she sought to deflect complaints that the government has so far only paid lip service to Aboriginal Peoples.

There are those who question the strength of the Liberal government’s commitment to indigenous issues, Jody Wilson-Raybould acknowledged during a speech hosted by the Public Policy Forum in Ottawa.

That’s far from the truth, she said, pointing to work unfolding behind the scenes.

“Let me say this: our commitment is as strong as ever,” Wilson-Raybould said.

“Our prime minister has made it very clear that we need an all-of-government approach based on recognition of indigenous peoples and their rights to address the colonial legacy in a substantive and meaningful way that will be transformative.”

Groundwork has been laid to advance change, she said, promising that publicly visible and bold actions would be forthcoming as a group of ministers examines federal laws, policies and practices related to indigenous peoples and their rights.

Statutory changes will likely flow from this work, she added.

Wilson-Raybould singled out the Indian Act, which she called a significant barrier for First Nations to develop economies on reserve land as well as their ability to engage with industries and businesses off-reserve.

Parliament passed the legislation in 1876, giving the federal government enormous power over the control of First Nations people on reserves.

Wilson-Raybould said she is looking to indigenous communities to tell her and the government how they want to govern themselves and define who they are.

Canada’s economy and First Nations are intertwined, she said, noting it is essential to undertake the work of reconciliation together. “Clearly, if we want to unlock our collective social, cultural and economic potential, it is needed.”

She pointed to a battle involving her own people — Nuu-chah-nulth First Nations on Vancouver Island — as an example of why action is still needed.

“We talk about economic reconciliation today but Canada is still in court fighting us, saying we do not have a right to exchange fish for money,” she said in an interview, pointing to a 2013 court victory from the B.C. Court of Appeal.

“I think what the minister said is important but we also need to recognize that Canada needs a new legal strategy in regards to First Nations that has that economic framework to it.”

Canada is also missing out on $27.7 billion annually because of its under-utilized indigenous workforce, according to the National Aboriginal Economic Development Board.

An additional $8.5 billion in income could be earned every year by the indigenous workforce if education and training gaps are closed, the board says.

Economic reconciliation will not be possible until First Nations are able to get out from under the Indian Act, said chair Dawn Madahbee.