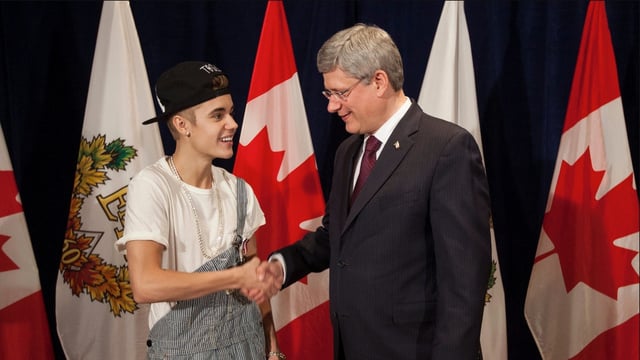 During the run-up to the Grey Cup, Prime Minister Stephen Harper handed Canada’s hottest current cultural export, Justin Bieber, a Diamond Jubilee Medal. Bieber wore overalls for the occasion. Chalk it up as another slightly bizarre expression of national pride from The Biebs, our primary purveyor of lol whut?! nationalism.

The official photograph of the medal presentation went viral, due partly thanks to Bieber tweeting, “I met the Prime Minister of Canada in overalls lol” along with his photo. In response to the online style derision that followed, Harper defended Bieber on his own, mostly dull, Twitter account (one recent tweet simply said: “Our government remains firmly focused on controlling gov’t expenditures and implementing Economic Action Plan 2012”). “In fairness,” he said, “I told him I would be wearing my overalls, too.”

The medal came at least 18 months since (according to some) the government wanted Bieber to perform at the Canada Day celebrations for the Duke and Duchess of Cambridge. The medal is one of 60,000 that will be handed out this year to Canadians who make a “significant contribution to a particular province, territory, region or community within Canada, or an achievement that brings credit to Canada.”

Bieber’s public nationalism has manifested itself as a strange sort. That is, rather than really saying much of value about the country – or, frankly, bringing credit to it – he seems to use it more as a marketing tool. Being Canadian appears to function more as a kind of branded Personal Quirk or bit of A&R-approved Official Bieber Trivia used only to set him apart from any other bland, formulaic pop star. The overalls are the latest example. There are others.

After vomiting during a recent concert, Bieber admitted he’d consumed spaghetti and milk prior to going on stage. “Basically, in Canada, we like to have spaghetti and milk,” Bieber told TMZ, as if that explained anything. The National Post quickly held a non-scientific poll. Of the 346 people who voted, 81 per cent maintained that no, spaghetti and milk is not a Canadian thing, and that “Justin Bieber is weird and gross.”

A few months earlier, on Alan Carr’s Summertime Spectacular in the UK, Bieber looked around nervously as Carr cracked wise about the Queen’s dour face during the celebrations of, coincidentally enough, the event for which Bieber’s new medal is named. “I don’t really get, like, I’m from Canada, I don’t really know what’s, I like, this, all this humour,” Bieber spluttered. “I don’t know if you’re, like, making fun of me or if I’m like. …” What being Canadian had to to with him not understanding the joke is unclear, but there it was anyway.

In July, Bieber reportedly told Rolling Stone he was “part Indian. I think Inuit or something? I’m enough per cent that in Canada I can get free gas.” You could almost hear the country cringe. The online backlash was instant, and the Congress of Aboriginal People publicly rebuffed the validity of the claim, saying the claim that Aboriginal people receive free gas was “simply not true.” The remarks, said the Congress’s national chief Betty Ann Lavallée was “another example of what Aboriginal Peoples in Canada struggle with every day.” (Though they also urged everyone to go easy on Bieber.)

It was ignorant to say, but not outside the realm of logic when you understand that for Bieber, being Canadian appears to be nothing more than an engineered personality trait. Why’d he say it? Simple: for the same reason he said the others. In a fabricated nationalism universe, statements can’t be harmful because they’re inherently meaningless.

Back to those overalls. At Gawker, the theory was Bieber’s face seemed to suggest he was “trolling” the Prime Minister. Maybe. Or it was just an excuse to add another notch in the Quirk belt. Lol. Overalls. He’s so “Canadian.”