An 'indisputable fact that trade is good for economic growth' Trudeau says. 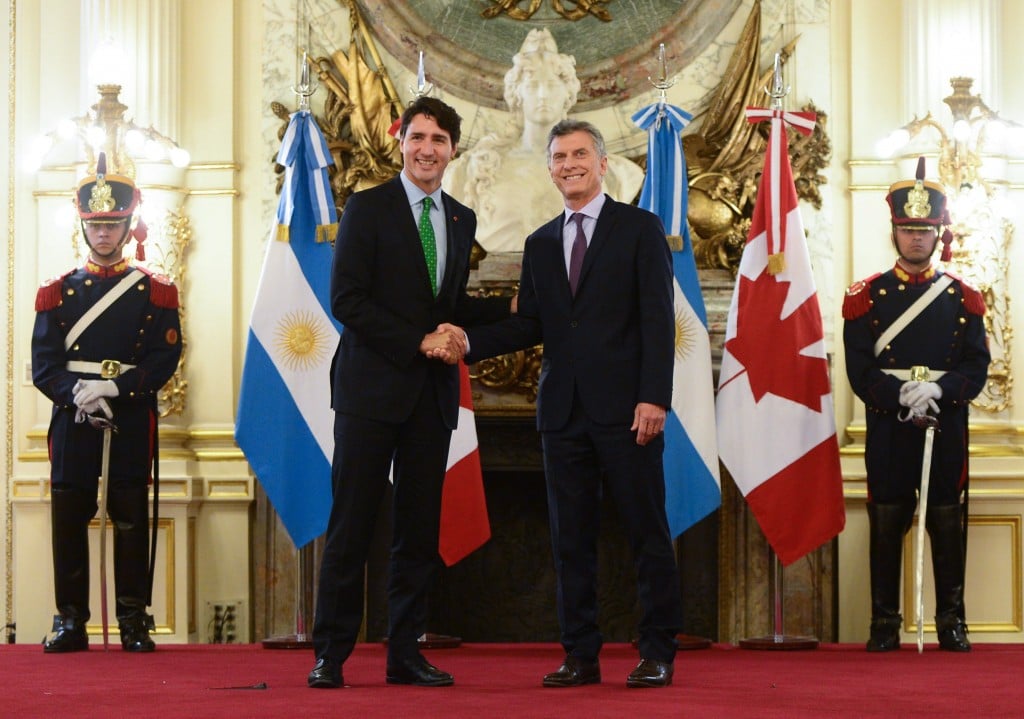 BUENOS AIRES, Argentina – Canada’s prime minister and his Argentine counterpart took direct aim Thursday at the walls of protectionism set to be erected around the United States, saying that freer trade is the best way to pull their countries out of economic uncertainty.

Justin Trudeau and Mauricio Macri said there is real anxiety that progress and global trade have resulted in people being left behind or children being robbed of the same opportunities afforded their parents and grandparents.

That anxiety has propelled anti-trade and anti-immigration movements in various places around the world, the most compelling examples of which are the election of Donald Trump in the U.S. and Britain’s vote to exit the European Union.

“It is an indisputable fact that trade is good for economic growth and can and should be good for all citizens,” Trudeau told a news conference Thursday.

Speaking in Spanish, Macri said his government believes that trade is the way to raise his citizens out of poverty, alleviate pressure on middle income earners and help the country’s finances overall.

He could use the help.

Macri is moving the country to the political centre after years of populist, nationalistic governments. He has made changes to currency rules, the tax code and the central statistics office in an effort to rebuild credibility and investor interest.

But Macri’s moves have been problematic for Argentines: their currency fell in value by 30 per cent after controls were removed, some 200,000 jobs have been lost based on estimates from the Argentina Center of Political Economy, and the loss of energy subsidies has seen electricity costs shoot up by about 300 per cent.

Domestic polling figures suggest the majority of Argentines are not pleased with the state of affairs in their country.

“We are paying for decisions we have made in the past. They weren’t bad decisions, but they have a cost,” said Melisa Argibay Rojas, who says she struggles to pay her electricity bills in the Argentine capital.

So what’s in it for Canada?

The duo declared that Argentina would open its doors again to Canadian pork products, collaborate on resettling 3,000 Syrian refugees into Argentina – including through an Argentine version of Canada’s private sponsorship program – and work through the World Trade Organization to further open borders to goods and services.

Macri also said he expected Canadian companies to be interested in investing in his country’s infrastructure program, which he compared to the multi-billion, multi-year program the Liberals are undertaking.

Canadian companies already have a foothold in Argentina, mainly in the mining sector, which receives the bulk of the attention in Canada over concerns about the social and environmental impact of projects.

Paul Haslam, an associate professor of international development at the University of Ottawa, said his research suggests Canadian firms are not more likely than other foreign-owned firms to cause tensions.

“That being said, some firms are involved in conflict and there has been a couple of nasty accidents with Canadian firms recently in Argentina,” said Haslam.

Macri is looking to make it easier for mining firms to operate in the country, cutting taxes federally and looking to have the provinces, who have jurisdiction over mining operations, follow suit, Haslam said.

A former Canadian diplomat to South America called Trudeau’s visit a shrewd geopolitical move given the political shift that is underway in Argentina, something that’s being mirrored in neighbouring countries.

Allan Culham said the prime minister’s timing is perfect for building personal relationships, which the South Americans like.

“It’s a kind of terra incognito for a lot of Canadian society,” said Culham, who served as Canada’s ambassadors in Guatemala, El Salvador, Venezuela and to the Organization of American States.