In a statement, the Vatican said the pair also talked about conflicts in the Middle East, religious freedom and current ethical issues.

Trudeau was also expected to bring up religious diversity and climate change during the meeting.

Trudeau then introduced his wife, Sophie Gregoire Trudeau, to the Pope along with officials from the Prime Minister’s Office.

The prime minister gave the Pope a rare set of Jesuit Relations books, which have become an important source detailing the beginnings of Canada.

Trudeau also presented the Pope with a Montagnais-French dictionary written by a French Jesuit in the 17th century.

In return, the Pope gave the prime minister a gold medal marking the fourth year of his pontificate, an autographed copy of his message for World Peace Day and three papal letters about family, environment and evangelism.

Trudeau was expected to ask the pontiff to issue a formal apology in Canada for the role of the Catholic Church in the residential school system.

His government has promised a call to action on the Truth and Reconciliation Commission’s demand for a papal apology to survivors, their families and communities related to the dark legacy of residential schools. 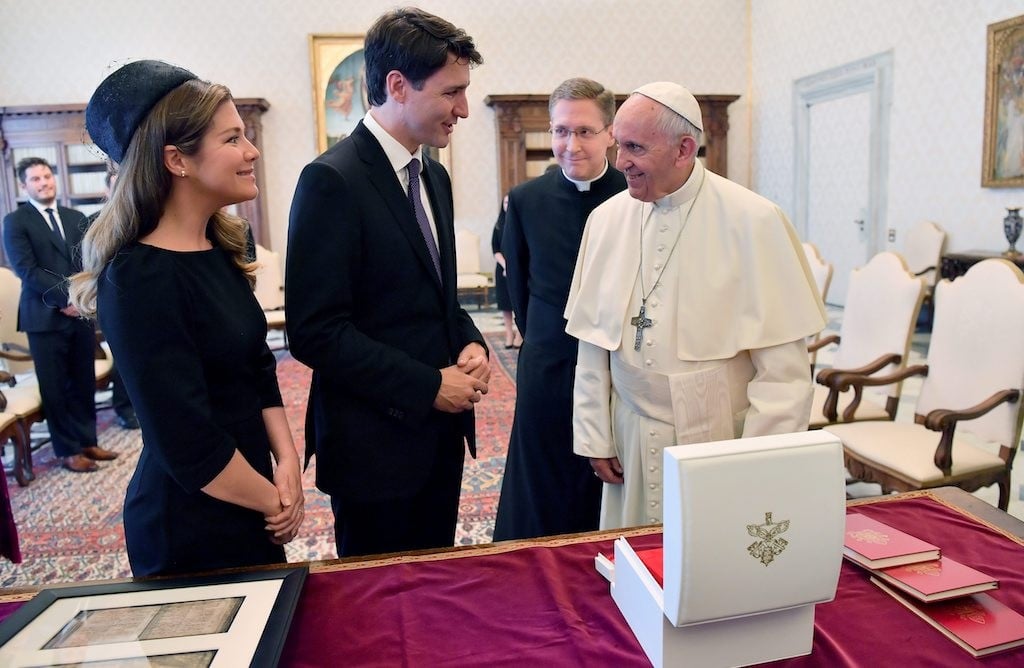 Canadian Prime Minister Justin Trudeau, center, and his wife Sophie Gregoire-Trudeau, left, meet Pope Francis on the occasion of their private audience, at the Vatican, Monday, May 29, 2017. (Ettore Ferrari/Pool Photo via AP)