Justin Trudeau invites questions, but finds only Liberals willing to quiz him 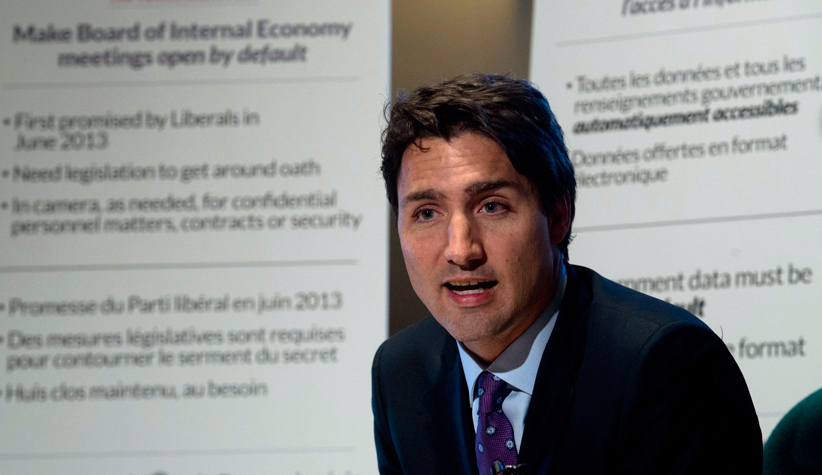 Tuesday night might’ve been a remarkable night in the story of Justin Trudeau. Perhaps it even was.

Even still, maybe he made something of it. Or maybe there was something here.

On Monday afternoon, Trudeau’s office had emailed MPs with an invitation to a “question-and-answer session” about his private member’s bill, which would have made changes to the board of internal economy (the committee of MPs that governs internal House matters) and the access to information system. Some, he said, had RSVP’d and Elizabeth May says she would’ve attended if she hadn’t been busy making a doomed effort at amending Bill C-51. But when 6:30pm on Tuesday evening arrived, it was just Justin Trudeau and 11 Liberal MPs sitting around a rectangular arrangement of tables in a committee room in an obscure corner of Parliament’s East Block. At one end of the room sat Trudeau, flanked by five placards set up to highlight elements of his bill. Directly opposite him were two empty chairs. Otherwise, the assembled included: four aides to Mr. Trudeau, one individual employed by the NDP, one cameraman, one photographer and three translators, and a grand total of two reporters who had turned out to see a man who has better than decent odds of being the next prime minister.

“It’s one of the reflections that I’ve had on our parliamentary democracy, how it is often now a game of talking points opposing each other, rather than actually listening and discussing and arguing and aiming for the best possible legislation to serve Canadians,” he said. “So it is with that optimism, and in that spirit, that I announced this public information session.”

It is possible, of course, that everyone was simply otherwise engaged—that some numbers of MPs would have been there if not for some reception or another. Still, it surely seemed improbable that any Conservative or New Democrat would ever appear at such a thing. Access to information isn’t exactly advantageous ground for the Conservatives. And anyway, rivals are otherwise no doubt loathe to do anything that could led credence to an opponent.

Perhaps a hundred years ago it would’ve been possible to imagine two or more MPs openly and happily engaging each other in such an open setting, but our politicians are far more risk averse (cowardly? fearful?) now. One imagines the appearance of a cabinet minister here would have been preceded by hours of preparation and counsel, probably with various forms to be filled out and approved by a committees and sub-committees within the Prime Minister’s Office.

It is, of course, possible that Trudeau and his advisors wagered as much—perhaps they could have announced the event a week earlier and spent days hyping it and somehow increased the odds of someone from the blue or orange teams appearing. Still, even if it was a relatively safe bet, it was still a gamble of some kind.

“I was optimistic, perhaps idealistic, that the opportunity to take on directly, in a semi-formal setting, a party leader would be too good to pass up for some of my opponents,” he said. “I guess I’m a little bit reminded of the difficulty I had finding a Conservative willing to step into the ring and punch me in the face…

There had been more takers 24 hours earlier when Trudeau had appeared in the House to make his second speech on the government’s latest plan for intervention against the Islamic State. As soon as Trudeau had finished those remarks, Jason Kenney, who the Liberal leader had singled-out for criticism, was up to ask a question. But so eager was Mr. Kenney to explain just how silly Mr. Trudeau is that the defence minister proceeded to squander a perfect opportunity to truly challenge the seriousness of the Liberal party’s position on this war—fussing at length over some various inelegant remarks of Mr. Trudeau’s before barely getting in an non-specific question about military intervention. So challenged, Trudeau took the opportunity to chide Kenney for his own stumbles with Twitter and precision weapons.

Left unasked was a simple question: Can the forces of ISIS possibly be defeated without the dropping of bombs from Western jets? (And, if not, why shouldn’t Canadian jets join the cause of dropping those bombs?) That would seem to be the most problematic question for the Liberal position, a position formally committed to Monday night with a vote in the House. And it would’ve been useful to see Trudeau try to answer that question.

Answering that might question have been easier than explaining his party’s take on C-51, a half-hearted vote in favour that was confirmed on Tuesday when Liberal critic Wayne Easter signed off on a bill that was barely amended by the public safety committee. As with the war, the Liberals have taken a position somewhere between the New Democrats and Conservatives—voting in favour of the government’s much-fretted-about anti-terror legislation even while they lament for the bill’s defects. To some degree, the logic seems coldly practical: give the security agencies new powers, perhaps take away a government point of attack, then hopefully fix the details in a few months once in government. The bill, of course, was going to pass anyway. But to that might be put a counter-factual: What if Trudeau had thrown his full force behind calling for changes to C-51? Could he have rallied the sort of pressure necessary to force further concessions? Would that have made it more or less likely that a Liberal government will be in power by the end of this year?

Beyond matters of war and civil liberties, Trudeau also drew a picture this week. And perhaps that was silly. Though if it helped the Liberals to another solid quarter for fundraising, it might at least have been also lucrative.

On Wednesday afternoon in question period, he swung wildly and fell right into a counter-punch from the Prime Minister. And on Wednesday night, his bill was easily defeated along party lines. The former was perhaps more of a loss than the latter—the latter being fairly predictable and the former being the sort of public embarrassment Trudeau, he whose seriousness is questioned, does not need.

And all the while, Liberal support seems to have been sliding.

But back to Tuesday evening.

After lamenting that no one had turned up to rhetorically punch him in the face, Trudeau proceeded nonetheless with a review of his bill and its purpose. He then opened the floor to questions, his Liberal colleagues politely raising their hands to quiz him.

Halfway through the hour, John McKay, the six-term MP who was secretly recorded last year lamenting for Trudeau’s edict of party discipline on matters related to abortion, queried his leader. Recalling the Harper government’s introduction of the Accountability Act and positing its subsequent failure to become the most open government on earth, McKay noted that there were selfish reasons for control—that it limits the amount of time you spend playing defence.

“I’m rather in favour of open by default, but the downside is that were you to be in the next government and adhere to this, this is going to be a very difficult piece of legislation to administer and it may actually be counter-productive to your best political interests because it will show you as a government that is going in this direction or that direction or whatever,” McKay suggested. “I’m assuming you’ve thought about those things and that seems to me to be the questions that other people will be asking rather directly.”

In response, Trudeau recalled a story he’d heard about his father, about how his father, as a student of history, had regretted the certain avoidance of documentation that resulted from the arrival of the Access to Information Act in 1983.

“The fact is I don’t think we can turn the clock back on that time,” the younger Trudeau now said. “I think we’re going to have to embark on a completely different style of government. A government that both accepts its responsibilities to be open and transparent, but also a population that doesn’t mind lifting the veil to see how sausages are made. That there is a dual responsibility in changing towards more open and transparent functioning, that really will go to a deep shift in how… government… operates.”

He stressed these three words. And then he went on for another 500 words.

“Once I look at the trend lines in democracy, the empowering of citizens and activists, I know that the government of the future is going to be very, very different than governments of the past. And there will have to be learning done, both by governments, breaking old habits, and by citizens, shifting their expectations. But I know we’re going there eventually and it’s a question of whether we want to step forward with that with confidence and optimism, knowing that we’re going to stumble, knowing that it’s going to provide challenges, or whether we get dragged there kicking and screaming by mobs with pitchforks, metaphorical of course…”

He said he’d once heard a story about fast-food purveyors agreeing, for the sake of their industry, to refrain from attacking each other, this apparently a parable for our current situation of attack ads and declining turnout.

“So yeah, our opponents will dig up emails and information, no doubt as every opposition ever has, that the government will have to explain and my hope is that government will begin to engage in a way that is open and transparent. And on this, I can only call on my own personal experience as someone who has lived much of his life in the public eye who now finds himself in the situation where people are scrutinizing my life to try and write attack ads and convince people to vote against me. I’ve had to conduct my life in a way that acknowledged that my life might well be an open book. And was I horribly limited because of it? Because of decisions I made? I don’t think so, but it was a choice that I made and I think it’s a choice that governments in the 21st century should make, of being open, accountable and transparent.”

There was a lot here. Even if what was here was a little elusive and vague—a hazy dream of an idea of something different. There was a certain searching to it.

Trudeau can be tested against that ideal. By how well and precisely and readily he explains himself according to both current standards and this dream-like future standard. By how well his proposals are crafted and by how far he clears the cynicism he seems to want to get over. There was that problematic take on the relevance of Parliament, but there is that interest in data. Possibly his own bill didn’t go far enough. Perhaps he could promise right now to put himself in something like Tuesday night’s situation every couple of months if he ever becomes prime minister. And even if he says he wants to change the game, he still must play the game and prove adept at it and that is perhaps a conundrum.

But after looking around this Parliament and taking it all in it is surely tempting to see the appeal in changing everything.