Justin Trudeau returns to Parliament with a hard stance against protests 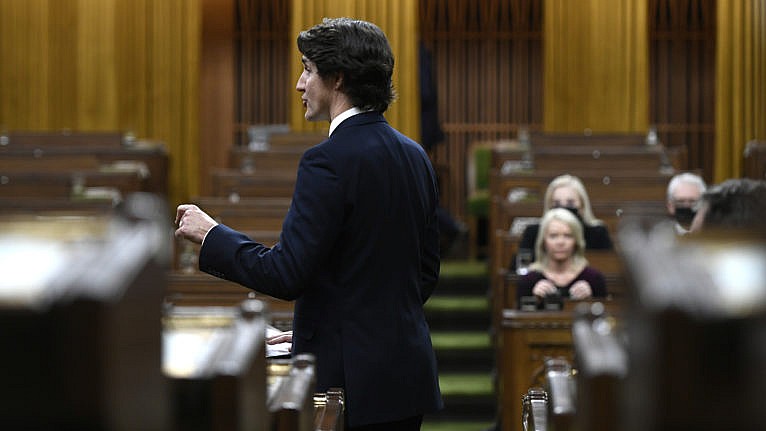 Trudeau rises during an emergency debate in the House of Commons on the situation in Ottawa, Feb. 7, 2022. (Justin Tang/The Canadian Press)

Justin Trudeau, week-long COVID isolation done, spoke in an emergency debate in Parliament Monday night, failing to extend an olive branch to the anti-mandate protesters occupying Ottawa. Instead, he said they should leave, the Globe reports: “Individuals are trying to blockade our economy, our democracy and our fellow citizens’ daily lives. It has to stop. The people of Ottawa don’t deserve to be harassed in their own neighbourhoods. They don’t deserve to be confronted with the inherent violence of a swastika flying on a street corner, or a confederate flag, or the insults and jeers just because they’re wearing a mask.”

Last week, the Globe reported that Bergen argued within her party that Tories should not ask the protesters to leave. The party is divided on the issue, with some, like Michael Chong on Monday night, calling for the protesters to leave—while others, like Garnet Genuis, stand foursquare behind the horn honkers.

Bridge shut: Protesters did not pay heed to Trudeau’s speech, and shut down the Ambassador Bridge connecting Detroit and Windsor on Monday night, CBC reports.

Quieter: The horns of Ottawa fell silent on Monday after lawyers Paul Champ and Emilie Taman won an injunction, the Citizen reports. They brought the action on behalf of a young woman who lives downtown, arguing that the honking was harmful and unnecessary, which convinced Justice Hugh McLean.

“Tooting a horn is not an expression of any great thought,” McLean noted wryly, even allowing for the “potential artistic merit” of the truckers’ creative use of patterns and beats.

Most oppose: The silencing of the horns should please Ottawa residents, the majority of whom, unsurprisingly, oppose the protest, according to an Abacus poll for CTV.

Cops sought: Ottawa is still seeking 1,800 more troops to improve security in the suddenly quieter city, Global reports. The feds had a newser Monday to push for better security co-operation. Police said they were stopping refuelling, but it appeared to be continuing.

Economical with the truth: Ottawa Police disputed the number of OPP helping the city, CTV reports. Solicitor General Sylvia Jones issued a statement on Sunday claiming the province had sent “more than” 1,500 officers from the OPP and other forces to help Ottawa police. But Ottawa police said Monday the service received just 100 OPP officers.

Fire: Police are investigating a reported arson in an apartment building, Global reports.

Charest courted: CPC Quebec MP Alain Rayes told Radio-Canada Monday that he has spoken to former premier (and federal PC leader) Jean Charest about running for the CPC leadership, CBC reports: “He’s a political machine, an exceptional speaker who knows Quebec and who, in my eyes, would be a formidable opponent for Justin Trudeau.” Charest had no comment.

Carney writes: Speaking of leadership and columns, former central banker and potential Liberal leader Mark Carney had a cogent, strongly worded column in the Globe on Monday, calling for firm leadership to end the crisis in Ottawa.

But by now anyone sending money to the convoy should be in no doubt: You are funding sedition. Foreign funders of an insurrection interfered in our domestic affairs from the start. Canadian authorities should take every step within the law to identify and thoroughly punish them. The involvement of foreign governments and any officials connected to them should be identified, exposed and addressed. I know from experience that crises don’t end by themselves. You can’t spin your way out of failure. You must recognize the scale of the challenge, devise a clear plan and then implement it methodically and deliberately.

Poloz speaks: Former Bank of Canada governor Stephen Poloz has a surprisingly interesting interview with Maclean’s Marie-Danielle Smith, discussing Star Trek, his new book and what is likely to happen with inflation.

Could it still be picking up? Yes, I’d say that’s a risk. But people aren’t doing a very careful job of understanding what prices have done. Supply chain issues will also get worked out—there’s too much money at stake for companies to not figure those things out. And the big counterargument, which I want to remind people of, is that the fourth industrial revolution [driven by artificial intelligence and biotech] will cause a lot of prices to fall.

View from Ottawa: Matt Gurney has a readable feature in the Line on a day among the deplorables in Ottawa, where he found many friendly if vaccine-obsessed protesters, and also mentally ill people and hard men. He found the noise unpleasant:

I still roll my eyes a bit at some of the more overheated descriptors of the honking — no, it’s not like being in a warzone, because in wars, the loud noises also include things like fire and shrapnel — I appreciate better how aggravating it would be for having now been up close myself. I was told repeatedly that Monday has thus far been a quiet day, relatively speaking. Still, after only a few hours of a relatively quiet day, I’ve had quite enough of truck horns. After 11 days, I might be prone to hyperbole, too.

Falcon in: New B.C. Liberal leader Kevin Falcon got off to an eventful start Monday, wishing John Horgan well and learning that former leader Andrew Wilkinson will resign his seat, allowing for a by-election that Falcon should win, Vaughan Palmer writes in the Vancouver Sun.